Hard Work? Dance? Art? Relational Aesthetics? Not Sure, But it’s Coming to Austin! 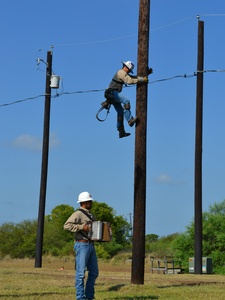 Austin Energy linemen relating to each other. Photo by Sofia Sokolove/Austin CultureMap

Austin’s Forklift Danceworks engages diverse communities through the creation of unique dance projects featuring all kinds of people. In addition to their “Leaps and Bounds” program, geared towards low-income families and youth, and their “Body Shift” program for those of “mixed ability,” Forklift Danceworks has been putting on some interesting performances. Founded in 2001 by Artistic Director Allison Orr, their mission is to celebrate “the extraordinary in the ordinary by creating original performances inspired by the movement of everyday life.” They take this mission seriously and quite literally.

Forklift’s next project, PowerUP, will be presented on September 21-22 at the Travis County Exposition Heritage Center, featuring the employees and machinery of Austin Energy. Austin CultureMap interviewed some of the participants, Austin Energy linemen, who stated, “This feels like art, not so much like work.” Art or work, the performance will be choreographed by Orr and set to an original score by Graham Reynolds.

Relational aesthetics, as defined by Wikipedia, is “a mode or tendency in fine art practice originally observed and highlighted by French art critic Nicolas Bourriaud as ‘a set of artistic practices which take as their theoretical and practical point of departure the whole of human relations and their social context, rather than an independent and private space.’” For further explanation of relational aesthetics, check out Glasstire’s recent video conversation with conceptual artist Tom Marioni, Hyperallergic’s insightful article “WTF is… Relational Aesthetics?“ and/or Hennesey Youngman’s equally insightful and hilarious ART THOUGHTZ.