The Act of Drinking Beer With Friends is the Highest Form of Art, Tonight!

As part of the Blaffer art Museum’s upcoming show Feast: Radical Hospitality in Contemporary Art, first-generation conceptual artist Tom Marioni will stage a series of events featuring free beer in his installation on the Blaffer’s second floor. Bill Davenport interviewed him this afternoon, and he spoke of relational aesthetics, beer as America’s sacramental wine, and the cyclical nature of fame.

Marioni’s installation, The Act of Drinking Beer With Friends is the Highest Form of Art, along with the rest of the exhibition, will be on view from September 7- December 7, 2013.

Free beer will be distributed by celebrity bartenders The Art Guys at the public opening on Friday, September 6, from 6-9 p.m., and also on October 3, and November 7,  from 6-9 p.m. with bartenders Toby Kamps from the Menil Collection, and Blaffer Director Claudia Schmuckli. 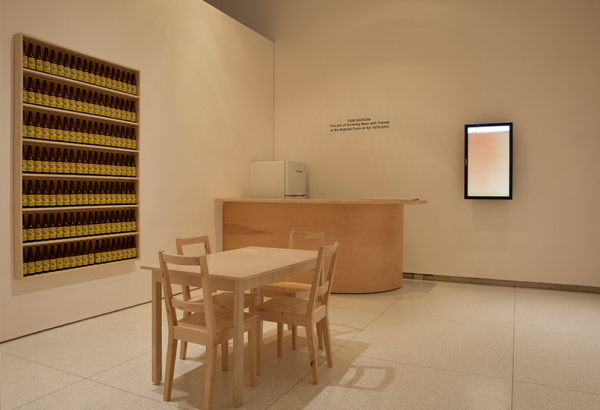 Tom Marioni. The Act of Drinking Beer with Friends is the Highest Form of Art, 1970–ongoing. Dimensions variable. Installation view at the Smart Museum of Art, The University of Chicago. Courtesy of the artist.