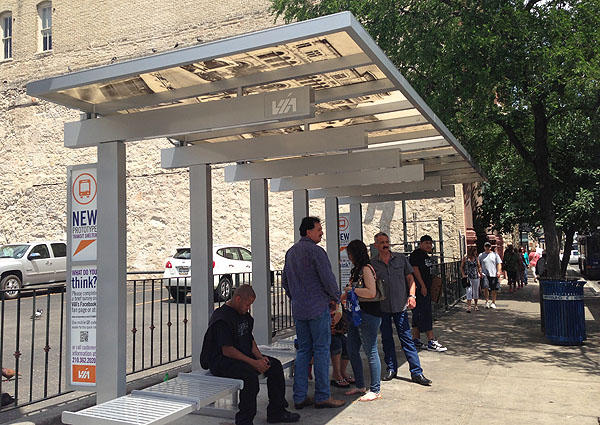 San Antonio’s City Council will decide on Thursday whether to approve three new bus shelters on the West Side, reports Robert Price of KAAB Fox News 29. Few details of the project are given in the report except that the shelters are “meant to resemble the look of a ‘front porch’ common in the neighborhood” and that “the so-called ‘public art’” project will cost up to $250,000. The same exact story was picked up by WOAI-TV News 4 San Antonio, repeating the phrase “so-called” and the quotation marks around “front porch” and “public art.” Both reports mention the quarter million in the first sentence and, at the very end, note that the majority of the funding is already covered by existing Community Development Block Grant funds, a HUD program (all but $35,000 actually). The second article provides a link for readers to voice opinions to their City Council representative.

Here are some other links that may be useful. To talk to folks at the Guadalupe Cultural Arts Center who might have more details about the project, go here. To read Thursday’s City Council agenda, including the exact ordinance to be considered, go here. To find out how citizens may address the Council on Wednesday, Thursday, or other days, go here.

If You’ve Been Waiting for a Sci-Fi Latino...

The text is trying to stir up controversy over expensive public art projects, but the video emphasizes how much pedestrian traffic there is in the West Side, and what a great addition the shelters would be. They interview a couple people on the street who all say the project seems cool. I wish the transcript of the article included the quotes from those people.

If you want to see concept renderings and info about the project, go here:
http://andreacaillouet.com/art/urban-porch/urban-porch.html

Thanks for your support!