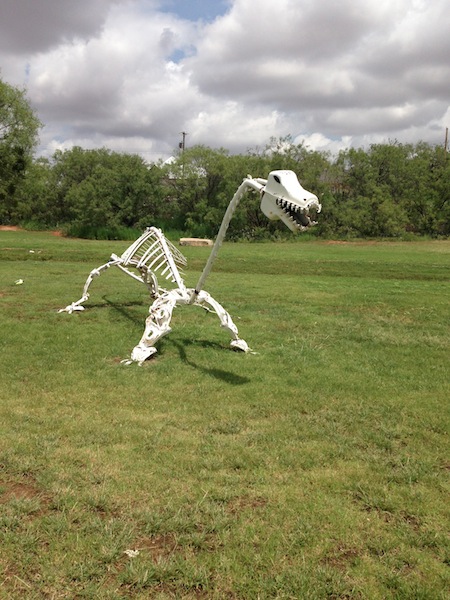 Public art can make a significant contribution to the cultural life of a community. From the monuments dedicated to ancient gods and rulers to the modern day fabric covered environmental works of Christo and Jeanne-Claude, public art has held an influential place in society. At its best, art specifically created for public spaces can give deeper meaning to a place and underline its history. It can stimulate the public’s imagination and thus its participation in the artistic process. It serves to revitalize both places and people.

However, there are inherent tensions in the contemporary world of public art. Currently, public art is often part of a municipal or bureaucratic process. Typically, a local government or corporate entity “commissions” a piece of art and subsequently seeks to maintain some input and control regarding its content. This can result in what some have termed “art by committee” with all of the pitfalls that the term implies. Artists can be deeply invested in the integrity of their creative vision while a government is attempting to be inoffensive and appeal to a majority of its citizens. Oscar Wilde captured the dilemma well when he offered, “Art should never try to be popular, the public should try to make itself more artistic.” 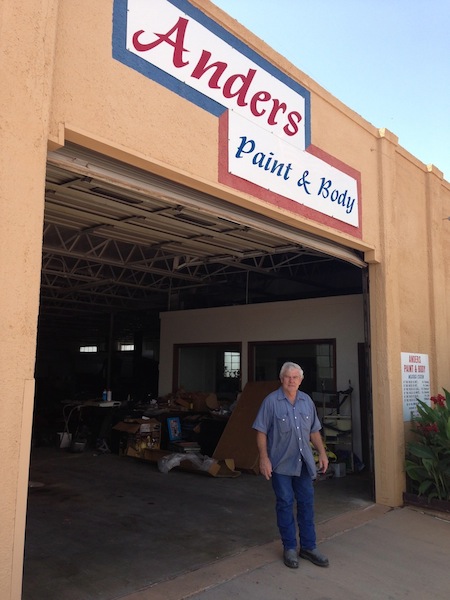 In the small West Texas town of Stamford, TX (pop. 3394) artist Johnny Anders has been able to successfully bridge the sometimes conflictual worlds of art and institutional bureaucracy. He does so by being the mayor. Born and raised in Stamford, Johnny Anders operates a third-generation auto mechanic and body shop established by his grandfather in 1923. He is proud to be a loyal hometown businessman and citizen in a town that often quickly loses its best and brightest to the allure and opportunities of the big city. After serving on the City Council, Anders became mayor in 2007 and gets good reviews from his constituents.

I recently visited with Mayor Johnny Anders in his office at Anders Paint and Body to discuss his other life as an artist. I began by asking about his initial inspiration to construct a welded dinosaur from discarded auto parts. Anders described how “in 1979 the large cars being produced in the United States were being called ‘Dinosaurs from Detroit’ and I thought that I could build a dinosaur from the unused parts around the shop.” Beginning without a plan, he worked as time allowed while operating his busy shop, finally completing the 30-foot sculpture after six months. The dinosaur was installed on his property a few blocks off the town square and was met with the expected curiosity and amusement. 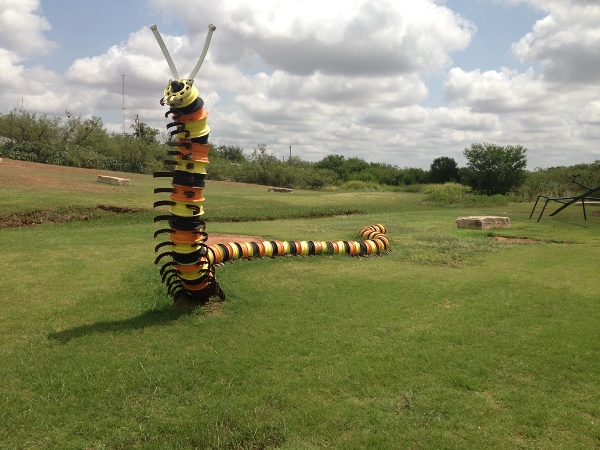 Encouraged by the success of this first project, Johnny’s imagination became more engaged with the materials he would accumulate in his auto body repair shop. His next creation continued with the dinosaur theme, this time resulting in an amusingly imposing Tyrannosaurus Rex standing over 25 feet tall. It was installed along one of the town’s busy thoroughfares, until recently toppling over in a high wind. Johnny described how working without a predetermined plan allows him to work slowly and intuitively. For instance, when beginning with the dinosaur’s legs, he did not have any idea what the head would be made of. This allows him to “see” what the various car parts can be—in this case, the oil pans that ultimately became the creature’s head. Over the next 25 years, other, more varied creatures followed, each with its own imaginative use of salvaged materials. A menacing walking stick made of drive shafts, a millipede constructed of over one hundred tire rims and curving over one hundred feet long and a sublimely abstract spider with the body of a mini car called an Isetta completed his makeshift menagerie. 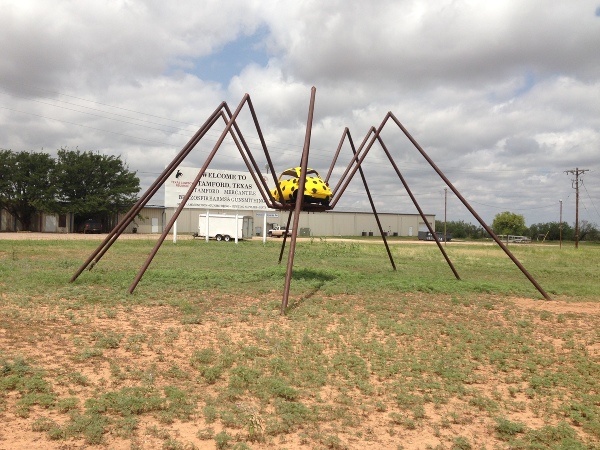 When he was elected mayor of Stamford in 2007, Anders saw the opportunity to blend his civic and artistic aspirations. He expressed how he has sought to have his creations serve as a “calling card” for the town saying, “If I can get just one extra person to stop in Stamford to look at them and then buy a hamburger or a tank of gas, then I have succeeded.” To that end, he has placed three sculptures across from the town’s municipal park where they further animate the public space. Anders says the public response to his creations has been very positive. The children have pet names for the sculptures and a group of art students have adopted their preservation and upkeep as a class project. 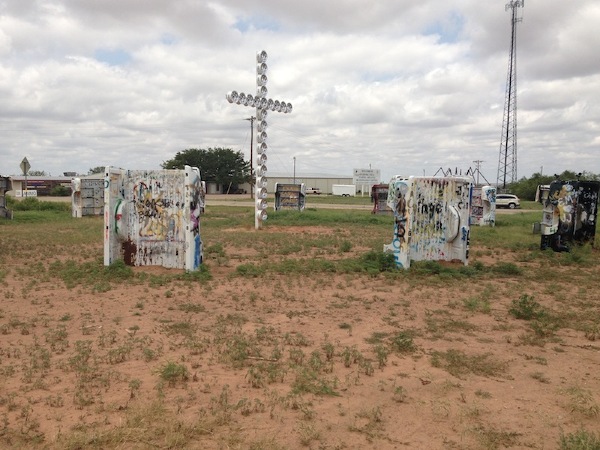 Mayor Johnny Anders has a restless creative mind and civic spirit. While traveling through Amarillo, he encountered Cadillac Ranch, the monument to manufacturing decay constructed of half buried Cadillacs in the desert. He was fascinated by this unique use of auto ephemera as public sculpture. Returning to Stamford, Anders was inspired to re-imagine his own collection of old pickup truck beds as potential art material. Thus was born his latest project, which he calls Bedlam. Constructed on the original location of his grandfather’s mechanic business, Bedlam is sited at the highway entrance to the city across from the rodeo grounds, which are home to the famous Texas Cowboy Reunion. 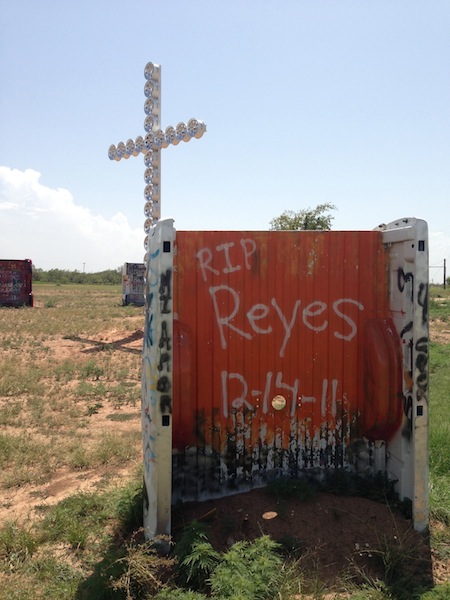 Constructed of a circle twelve pickup truck beds, Anders originally conceived the sculpture as a sundial, but found that he could not successfully engineer it. He subsequently added the chrome wheel adorned cross to his design and now sees the work as expressing the sentiment of “God Bless Texas.” Surprisingly, Anders also carried forward to Bedlam the essential component that graffiti has held at Cadillac Ranch. Upon its completion, Anders promoted the site as a place for the youth of the town to exercise their graffiti creativity. His goal was not only to inspire creative expression, but also to provide an alternative to the tagging of other public or private properties. According to Anders, there has been a significant decrease in public graffiti, thus fulfilling his goal to be both artistic and civic minded. The younger community has embraced Bedlam as a site for creative social expression both celebratory and solemn. Anders is pleased that the kids incorporate graffiti painting at Bedlam as a part of events they commemorate, be it birthdays or the tragic death of one of their peers. Always a town booster, Mayor Anders hopes that his next sculpture will be a larger than life bulldog, the mascot of Stamford High School. 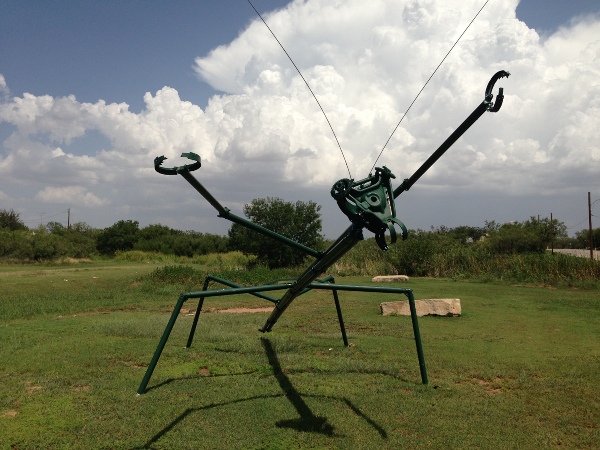 I have a question as I am in a dispute with a peer. I was recently told that your sculpture of the cross and the pick up truck beds represented a tragic death of 5 kids who lived in Stamford. It was a discussion on a bus ride where the story was being told to me. The ladies that were telling the story were Stamford residents. Now I am hearing that this story is false. Can you give me any input on the tale that was told to me? Thank you,
Laurie Peterson.

If you would have taken the time to read the introduction you would have read the following:
Constructed of a circle twelve pickup truck beds, Anders originally conceived the sculpture as a sundial, but found that he could not successfully engineer it. He subsequently added the chrome wheel adorned cross to his design and now sees the work as expressing the sentiment of “God Bless Texas.”
Nothing about what some old ladies said on a bus trip.. He has allowed the students to do the graffiti and if they choose to put a friends name now that is not a problem.