As if anyone needs to be reminded of the temperature, the Aurora Picture Show has titled its screening of short films and videos “Houston Is So Hot!” Or maybe the “hotness” is meant to brag about the caliber of Houston artists presented in Saturday night’s screening, curated by APS Curator Mary Magsamen. In either case, they’re doing it Houston-style: in the air-conditioning with margaritas. 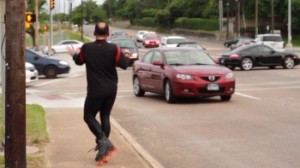 A few of the shorts will highlight fixtures of the quirky Houston scene, such as Montrose Rollerblade Dancer by Alex Luster, who gained attention last year for his full-length documentary Stick ‘Em Up! For nostalgic Houstonians, Stephanie Saint Sanchez (filmmaker and founder of Senorita Cinema, Houston’s all-Latina film festival) will show The Last Roar: Requiem for a Video Store, a “musical romp” about the indie video store Audio Visual Plus, which held on much longer than anyone thought possible. Reaching back further still, recent transplant Bill Daniel will present his footage from Houston’s long-defunct Maceba Theater, Butthole Surfers, Houston, 1987, which Magsamen calls “beautiful and mesmerizing.”