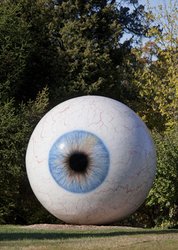 A giant human eyeball has arrived in downtown Dallas to be installed across the street from The Joule Hotel, whose impressive contemporary artwork collection was featured a couple months ago in the New York Times.

Originally commissioned as part of the Chicago Loop Alliance’s Art Loop program in 2010, Eye, by Chicago-based artist Tony Tasset, was acquired by Headington Companies, owner of The Joule. Now, it’s “a place-making space,” according to a Headington Companies spokesperson. “A temporary exhibition space for a significant art installation seemed like a great way to achieve that while further developing a sense of art and culture in downtown Dallas.”

The 30-foot-tall sculpture is meant to conjure up ideas of knowledge, power, pop culture, and surveillance, with a huge playland ick-factor. It should be great for tourist photo-ops, except that the final installation (in 10 days) will include a fence.

My first time seeing the giant eye ball sculpture with my 8yr old daughter and 13yr old son. We were certainly wowed by it. Grest work TONY TASSET ! Thanks for bringing your work to Dallas !

Yeah, the fence is necessary (to idiot proof the sculpture) but it does disrupt the viewing experience. Just read the Artstroller write up about this too.

Between being displayed in Chicago, and now in Dallas, it was back in Sparta, WI, at the company where it was actually built! For almost 2 years! In an open field area, along the road. Now THAT was surreal.