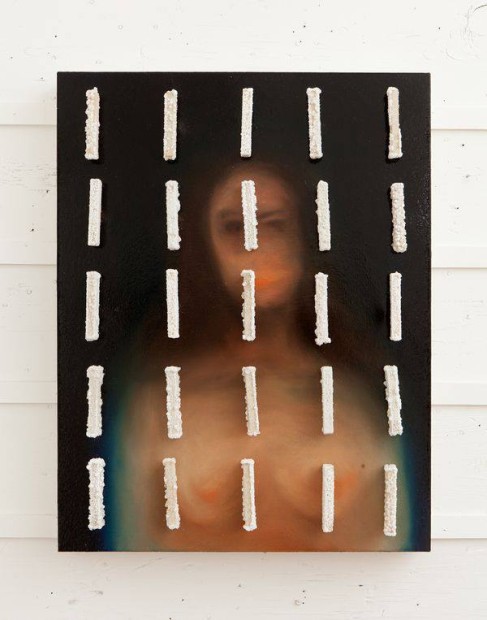 Samantha McCurdy and Alex DiJulio both studied Interdisciplinary Sculpture at Maryland Institute College of Art and use nontraditional methods and materials. For their show The New Navy, the pair collaborates on a series of wall-based objects that utilize concrete, found wood, crystals and paint to explore materials, process, and the color blue.

In addition to mixing media, they also mix the notions of picture and object in various ways. Of course, pictures are objects; they have a material base, but it’s difficult to focus on both of these aspects of a work at the same time. The boundary between them is a mental one. The works Separator 1 and Separator 2 take the most direct route to try and pierce that boundary. In each piece, a group of blocks is awkwardly attached to the surface of a painting in clumsy rows and columns, obscuring a generically painted female figure. It’s hard to look into the picture when it’s being used to do real world tasks like holding up blocks. That’s the point. There’s something exciting about so simple and violent a breach of the picture plane. 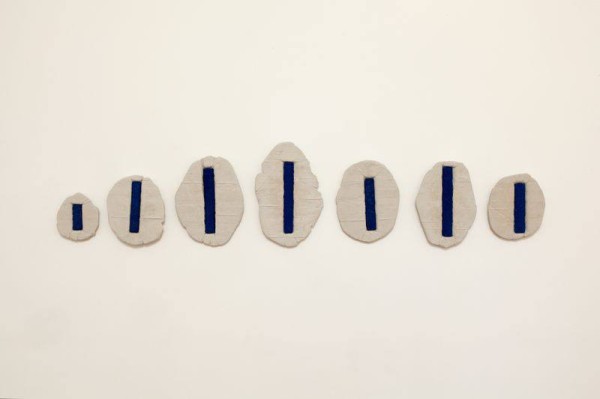 Most of the works, such as the grouping Blue Etic 1-7, employ some version of a flattened blob of cast concrete lifted up and hung on the wall to reveal the circumstances of its casting: bubbles, creases from some kind of lining, and a niche cradling a block coated with either colored sand or crystals. They could as easily be religious relics as construction site debris.

For all of their handmade imperfection, they show little trace of actual hands. Their construction is thoughtfully staged to appear as if they could’ve created themselves or been accidentally assembled. But by hanging on walls, they become pictures and allow us to consider the logistics of how materials come to mean. Mineral-crusted objects float in the frozen puckered surface of the concrete and create a figure/ground of sorts. But do you look into it or at it? I read them with my body more quickly than with my mind. I see them as the product of different physical forces: gravity, weight, liquid, solid, the slow growing of crystals, the quick setting of cement, the speed of ideas. Their rhythm reminds me that thinking has a material base as well. 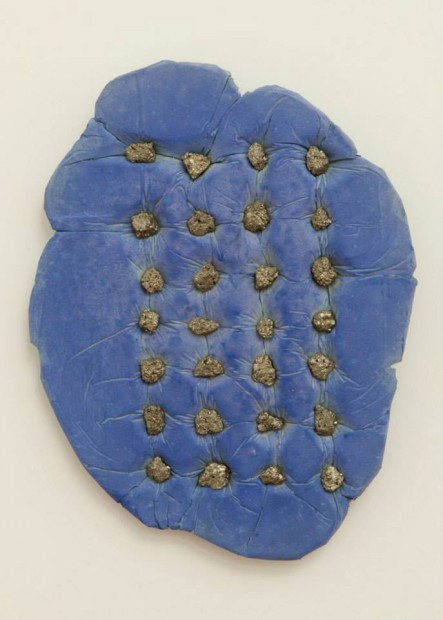 Blanket Statement contains small pieces of pyrite pressed into a hunk of hazy purplish-blue concrete that calls to mind upholstered cushions. It looks velvety and luxurious, like something King Arthur might bring to sit on at a basketball game. But this cushiony effect is just a coincidental likeness, growing from the process rather than a representation of any particular thing. Considered individually, the elements of the work connote science kits and camp crafts more than opulence and luxury. Coincidental or not, associations inflect and color a work’s meaning—that’s the fun of this game. 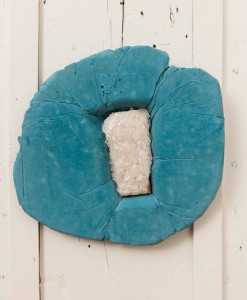 The shades of blue referred to in the show’s title are painted onto canvases, pigmented in concrete and soaked into sand-covered rectangles, but the blue theme seems an afterthought, or a thin excuse to put a certain group of works in a room together. There is the requisite Yves Klein Blue in attendance, a pungent royal chroma heavy with references, and less iconic blues, which make you realize how relative and squishy color can be. This blue is grayer than that one but greener than that other one, and almost purple when compared to that one over there. 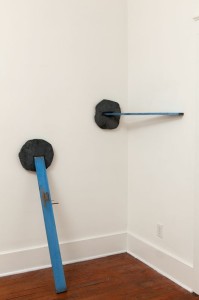 Color is also, in a way, made up out of language. I remember driving through the countryside around Austin a few years ago and noticing a bright patch of color out in a field. After a moment, I realized that it was a bunch of trash scattered along the ground but, for those few seconds, I was taken by the beauty of the colors; I remember a particular pale blue that turned out to be plastic grocery bags before the magic disappeared. There’s sometimes a fuzzy moment before we know what a thing is, what the thing’s name is, where it floats around like a stem cell of pure possibility. McCurdy and DiJulio work similarly underneath the radar of language, trying to keep their creations in this unfixed, churning state where the meaning of materials is open to renegotiation.

The New Navy is on view at Dallas’ RE Gallery until August 10th.  All Images are courtesy of Kevin Todora.

Intersections at UNT on the Square

More images from the show may be seen here: