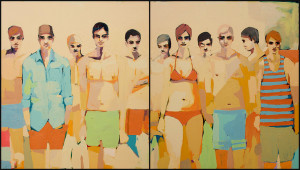 Patrick Puckett, Figures on a Beach

Confident, figurative paintings line the walls of Wally Workman’s Austin gallery. Each of the works of Patrick Puckett is well-balanced and technically well-made. His use of thick, broad paint strokes remind me of West Coast artist Wayne Thiebaud. Thiebaud is known more for his Pop art pastry paintings and Puckett’s work is expressionistic, figurative, and not as refined or subtle in color. But the method with which he layers pigment with thick strokes and well-defined shadows remind me of Thiebaud’s approach to painting.

The longer I stayed in the gallery examining the lush strokes, I began to look beyond the calm demeanor of the subjects’ faces and into their eyes. I felt lonely, cold lives reflected there.

I began to recognize the people portrayed in the paintings: the leisure class. I know these people; I have worked for these people. The titles, though blunt, reveal their lifestyles: “Women on a Sailboat,” “Pool,” “Figure with Towel” and “The Jet Ski.” 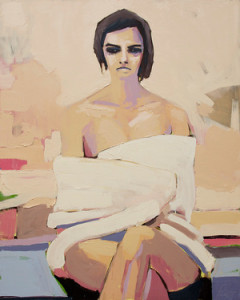 “Figure with Towel” reminded me of my youth working at country clubs. Some of the patrons had reached the pinnacle of success yet had no deep joy or satisfaction for the peaks they had climbed. There was once a woman there who had all of the nothingness that one could acquire. She slowly rolled into the pool leaving behind her white russian, her 401k and her rogue husband. As I approached the submerged woman, I noticed her staring at me from her new place of peace at the bottom of the pool. The scene reminded me of a David Hockney painting minus the boy. Instinctively, I jumped in and brought her back to the surface. The woman just returned to her place in the sun and stared. I brought her another drink.

On the surface, the couple in the painting “The Jet Ski” appears to be experiencing the lake’s brochure image, but something underneath—the defeated look in the girl’s eyes, the slouch of the jet ski driver—radiates outward. I get a feeling like on a 4th of July weekend, when the lake is too crowded to play. All the toys but none of the joy. I want to tell the man in the painting that she may be with you, but she is longingly staring at the cigarette boat blasting the latest beat. At the slightest provocation, she will surely jump ship, leaving you with your lukewarm Lone Star and lame water scooter.

In “Thelma,” the woman in the vibrant painting has a contemplative thousand-mile stare. The expression on her face seems to emote that she has just received news of her failing marriage. Or, perhaps, she is wondering why she married a man whose start-up failed? Or does she regret last night, or is she simply lost in a novel? As I would replace the towels for women like this, I could feel myself vanish into the limestone walls that surround the large, inviting swimming pool. My value was summed up in a well-folded extra-soft thousand-thread count cotton towel.

Then there is “Louise.” A woman lounges on an orange-and-green striped beach chair. She stares: is it jealousy, envy? Or is she just trying to get the cabana boy to read her mind and bring her another piña colada?

I picked up the gallery literature on Puckett’s process: “In looking at the progression of Patrick’s paintings, you can see they start in a much darker place and painstakingly work their way toward the light—literally and conceptually.”

I was not alone; my feeling was correct. There is something dark and brooding underneath the ideal life displayed in the paintings. The well-structured work is a glimpse into a class of people unfettered by economic or other worldly concerns. So why the hidden harshness in their eyes? Do they know (or care) that some conspiracists say that they are the elite class manipulating and exploiting the mass population of this planet? Yes, I went there—through those eyes I first noticed in these paintings’ subjects. Their eyes cannot shield the eternal soul.

The audience that came to view the show seemed to be pleased with Puckett’s paintings. They were chatting, drinking wine and snacking from assorted cheese plates. I had to wonder: if I began to take random photos of this crowd, would I find a Thelma or Louise like depicted in the paintings? The dark shadow behind the façade? In proper gallery attire, of course.

Patrick Puckett: Solo Show will be on view at Wally Workman Gallery through July 27.