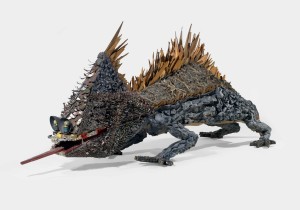 The Exploring Latino Identities series examines issues in Latino/Latin American contemporary art through interviews with artists, art historians, and others. In today’s installment, Michael Wellen, the Assistant Curator of Latin American and Latino Art at the Museum of Fine Arts Houston, talks about the art of breakfast tacos, how museums build collections, and Latin American exhibitions at the MFAH.

Lauren Moya Ford: What are the key misunderstandings about Latin American and Latino art?

Michael Wellen: Your question assumes that there are general misunderstandings about Latin American and Latino art. But, I don’t agree with that assumption. A great deal of interest and knowledge among scholars, collectors, and the general public already exists around Latin American art and continues to grow each year. Granted, it is still an emerging field, but the prejudices that affected the field twenty, thirty, or forty years ago are no longer the same. In the last decade, the amount of scholarship, exhibitions, academic programs, fairs, biennials, and press coverage about Latin American art has grown exponentially. Latin American art is widely considered a legitimate area of study, one that requires specialization and expertise just like any other.

LMF: How do you define “Latino” versus “Latin American” art?

MW: Within the field, there’s an important distinction between the two.  Although both terms are problematic, “Latino” generally describes artists of Latin American descent born or raised in the US, whereas “Latin American” describes artists who live and work primarily in Central and South America. My aim as curator and writer is to broaden access and knowledge in both of these fields. It’s exciting to be part of the MFAH, an environment that fosters similar goals through projects like The International Center for the Arts of the Americas (ICAA)’s digital archive of 20th-Century Latin American and Latino Art, which makes key texts from Latin American and Latino Art available online and free for the world to access.

LMF: How does the museum decide what to collect?

MW: In most cases, the responsibilities rest on the shoulders of curators. It is our job to be knowledgeable about the field, to put forward works for consideration, and to effectively communicate the importance of those works to others. Proposing an acquisition requires a series of conversations, presentations, and debates, and curators often must justify their selection to several parties, including fellow museum curators, the director, select trustees, and committees with knowledge of the field. It can be nerve-racking, but it’s an important and exciting project to propose an acquisition; a permanent collection is a body of work that people will continue to examine and discuss for many years to come. And the curator builds a legacy that carries on long after she or he has left.

LMF: What about collecting contemporary art?

MW: It’s not much different. You have to spend time conducting research, seeing and reading about exhibitions, visiting artists in their studios, talking with galleries, and keeping in touch with professors and students working in the field. Some of the selection comes from intuition, honestly, but it can’t all be intuition. It has to also be reasoned with an understanding of the artist’s larger body of work and how that piece may fit into broader cultural, political, and social issues. I think of a work like Breakfast Tacos (2003) by Chuck Ramírez, a large photograph acquired by Anne Tucker and the MFAH Photography Department several years ago. Breakfast Tacos shows a table littered with the leftovers from a Tex-Mex breakfast. On a formal level, the photograph is very beautiful. Crumpled tin foil, tortillas, beer cans, plastic flowers, and a Mexican sombrero create a richly textured scene. But the work is also emotionally and intellectually evocative. Having lived in Texas for a decade, I have a deep love for breakfast tacos—a very regional food, one associated with San Antonio and the Rio Grande Valley. Here, Ramirez weaves together symbols of regional and cultural identity with art historical traditions of the vanitas still-life. This is a bittersweet representation of a meal enjoyed, but now gone. A metaphor for the fleeting nature of life. 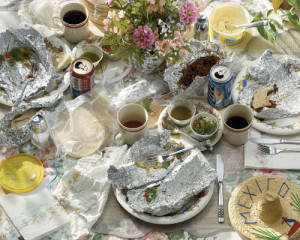 LMF: Is the museum the ultimate standard for determining the value of art?

MW: Well, value is a difficult thing to assess and a work of art takes on different values depending on context. For me, the museum’s importance is in prompting an interaction between artists, artworks, and audiences. You can’t predict what’s going to happen after that. An experience with art might send someone on an entirely different path in their life; they might want to travel to a different place, or engage with communities that were previously unfamiliar. People come to museums because the experience of walking through an exhibition is a form of stimulation unlike any other; it’s not like going to the movies, not like reading a book, nor interacting through a computer. It involves space and time. I’ll never forget the first time I saw Daniel Martinez’s TO MAKE A BLIND MAN MURDER FOR THE THINGS HE’S SEEN at the MFAH, years before I started working here. It was one of the most captivating and haunting works that I’ve ever seen: an animatronic self-portrait of the artist that slits his own wrists while maniacally laughing. A work like that is shocking and elicits a visceral response that only can be experienced in person. Those kinds of encounters with art—the ones that hit on multiple chords at once (emotional, intellectual, physical)—are what I value most. 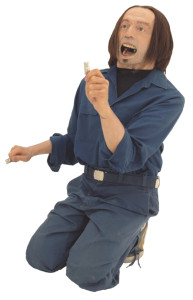 LMF: What are the Latin American Department’s upcoming projects?

MW: We recently opened Intersecting Modernities: Latin American Art from the Brillembourg Capriles Collection, which includes over 100 paintings highlighting some of the most influential Latin American artists of the 20th century. The show includes many rarely-seen works by Wifredo Lam, Matta, Joaquín Torres-Garcia, Fernando Botero and others; it’s very exciting. This fall, we’re partnering with Rice University to bring the art critic Gerardo Mosquera to give a free public lecture at the MFAH on October 9th. And in November, we’re opening the first major US exhibition about the Argentinean artist Antonio Berni, focusing on his Juanito and Ramona series.  In the 1960s and 1970s, Berni created a number of paintings, prints, and large assemblages depicting two fictitious characters, Juanito Laguna and Ramona Montiel. These works were innovative for the way the artist incorporated discarded materials from the streets of Buenos Aires to tell the story of the characters’ lives. And in Argentina, Juanito and Ramona quickly became folk heroes, memorialized in songs and still well-known today. The show will bring together about 140 works including several of Berni’s gigantic monsters representing Ramona’s nightmares. I think you’ll be pleasantly surprised.

Intersecting Modernities: Latin American Art from The Brillembourg Capriles Collection is on display at the MFAH through September 2, 2013.