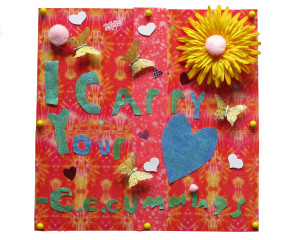 There are many projects, events, and exhibitions commemorating the 50th anniversary of the assassination of President John F. Kennedy in Dallas. (Hotel Texas: An Art Exhibition for the President and Mrs. John F. Kennedy is up at the DMA through September 15.) The Dallas LOVE Project views the anniversary as an opportunity to change Dallas’ reputation and transform it into the “City of Love.”

“After President Kennedy was assassinated here on November 22, 1963, Dallas was labeled by some as a ‘City of Hate,’” Project Director Karen Blessen told the Dallas News. “We want to use art to show that love lives in Dallas.” The goal of the project is to install 50,000 works of art (created by artists, students, and ordinary citizens) throughout the city beginning on September 21, the International Day of Peace.

The project is looking for 200 volunteers for tomorrow’s “Walk the Motorcade Volunteer Rally” to help secure exhibitors to display about 20,000 of the works on windows and walls of stores lining the JFK motorcade route. There will be a brief training session at 9 a.m. at 124 N. Peak St. in Deep Ellum. Volunteers will be assigned specific areas and will hit the streets at 9:30 am. At 1 pm, the LOVE patrols will return to 29 Pieces for a debriefing and closing rally.