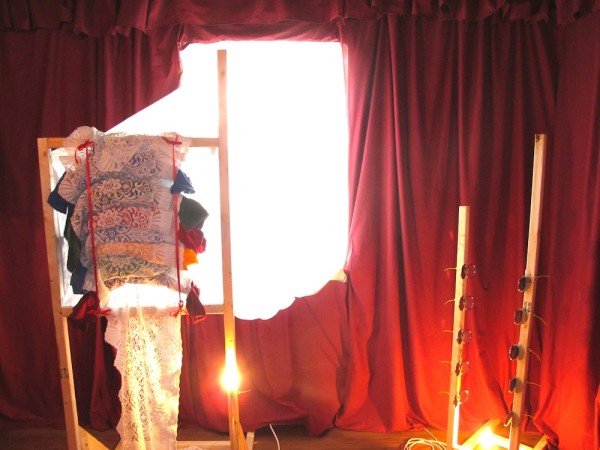 On my first visit to Red Space Gallery, the window occupying the far wall jumped out at me. For a show to be successful in the small Northside Austin apartment gallery, the artist would have to deal with it, either by covering it up or by incorporating it into the work.

Michael Anthony Garcia chose to integrate the window into The Illuminaughty Machine, a fully immersive installation like a Beuysian “environment.” The walls are covered in red, drape-like fabric; the ceiling in blue, gray and tan plaid. Components evoking Tesla’s Electric Age machinery occupy three of the corners, made out of unfinished 2x2s and clothing. One includes lampshades, another compact mirrors, and the one closest to the entrance is a 2×2 wearing a child’s shoe on a stool. Though they recall readymades, Garcia’s constructions don’t have Duchamp’s deadpan humor. The clothes and lumber poetically suggest a human presence with articles of clothing “woven” into the structures. 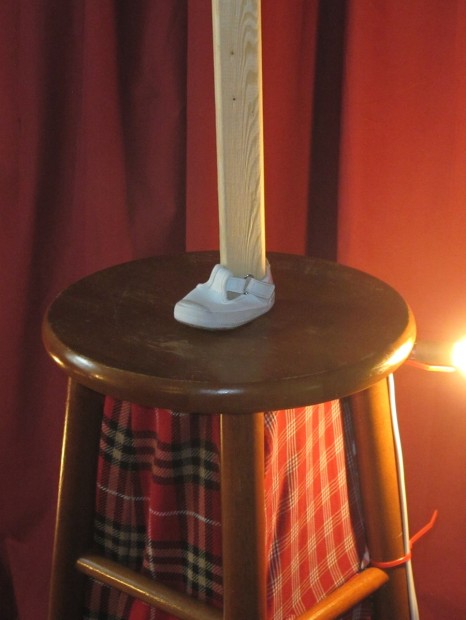 Finally, we see the window. White translucent drapery connects its rectangular frame to a wooden structure. White lace spills down the front of the device over rolled-up towels—blue, green, red and yellow. The window is the machine’s power source or point of connectivity.

The Illuminaughty Machine is a work of great imagination, both for artist and viewer, though “viewer” seems like the wrong term considering we occupy the piece rather than look at it. 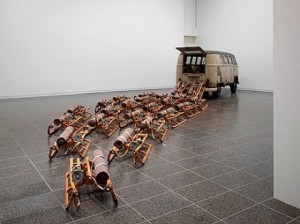 One sees the influence of Ed Kienholz in the anti-modern feel of the machine—the use of cloth and wood where metal would be. Garcia references “spiritual science” in his artist statement, a starting point for Joseph Beuys. Garcia refers to his works as a “pseudo-spiritual-technology” that suggests Christianity and science can find some points of agreement only because the machines don’t work. In Garcia’s words, they have “no physical means of output.” Beuys likewise imagined the failure of technology as a jumping off point for mysticism. In The Pack, 24 sleds emerge from a VW van, each outfitted with a lump of fat, a roll of felt and a flashlight.

The epistemology of Garcia’s piece is much more accessible than his description of the piece as “defining the inexplicable forces of attraction and sexual desire and the questions surrounding those urges,” which is only vaguely suggested by the gendered connotations of the lace, the plaid shirts, the compacts, the baby’s shoe, and the title. But I forgive him; the piece has other rich content—it’s immersive, and he figured out a way to make that window work. 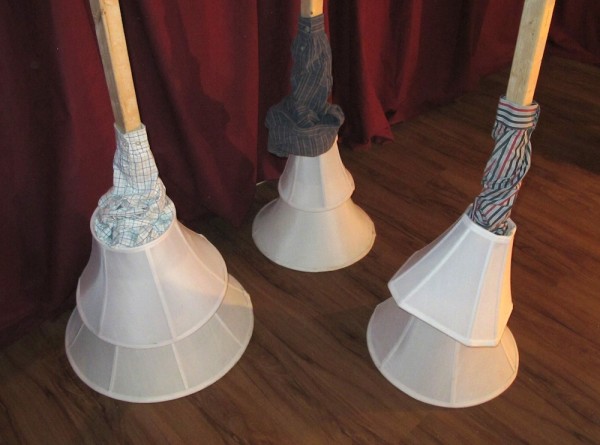