How to Cure World Blindness: An Interview with Joel Ross and Jason Creps

In conjunction with their Austin exhibition Not How It Happened at Tiny Park gallery (through June 22), Joel Ross and Jason Creps shared thoughts with me via email on such topics as collaboration, site-specificity, language and art, interventionist practice, folk culture and conceptual art, and politics and aesthetics. 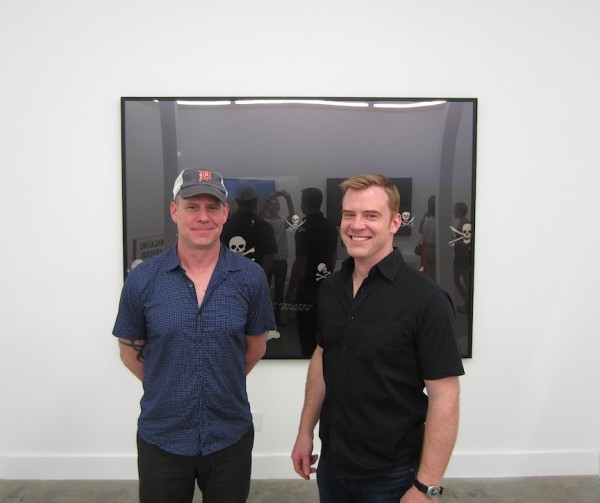 Joel Ross & Jason Creps: The easiest way, and most direct parallel, to describe a model for how we collaborate is one of musicians who play music together. We’ve been friends for a long time and always admired and respected each other’s work. In 2005, Joel asked Jason to help him create some photos that he was interested in producing but didn’t have the technical skills or photographic equipment to pull it off alone. The collaboration has grown from something like one musician playing on another’s track to being akin to one of writing and recording songs together.

We settled into it pretty seamlessly. There’s no struggle. We each bring our strengths and experiences to it. It is true that Joel tends to be the word technician and Jason, the camera technician. We both build things. That said, we haven’t set any parameters for who has ownership over any stage in the process of making a piece. When we look at the test strips together, we almost always pick the same shots as our favorites. It works well; it just flows. And it’s fun.

CK: Do you position yourselves within a particular artistic lineage and, if so, who are some antecedents?

JR & JC: There’s a whole laundry list of artists who we’ve looked to, been influenced by, and hope to add something to the dialogue they’ve carried. Some of them are: Jenny Holzer, Barbara Kruger, Sophie Calle, Gillian Wearing, Ed Ruscha, William Eggleston, Stephen Shore, Diane Arbus, Richard Prince– and the anonymous people who put up handmade signs along the side of the road in front of their homes or businesses.

CK: Having spent formative years in the Midwest myself and returning annually to Ohio, I have an ongoing fascination with the folk culture of DIY road signage—especially apparent on the drive south from Columbus to the Appalachian part of the state. Do you have any thoughts about folk culture and conceptual art? 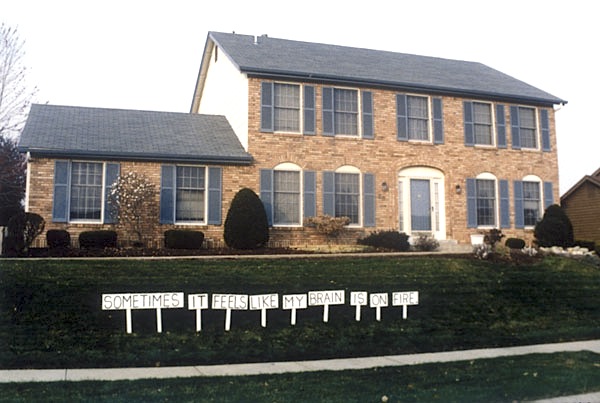 JR & JC: Joel grew up in Texas and Jason in Ohio. We’ve both been living in the Midwest for a long time. We’ve both traveled back and forth across the country by car quite a bit. America has a rich tradition of DIY signage and, as you say, there are stretches of highway that really make that apparent. A lot of the time those signs are about religious beliefs, but not always. It is a bold act to put philosophy into action in that way. Anytime someone has that kind of passion about their beliefs, it gets our attention.

We’re interested in what we share with those people and with conceptual artists. At its root, what these practices have in common is the act of putting themselves out there in a format that is not safe, in fact, it’s pretty volatile. Communicating with strangers is always risky.

CK: Why make language visual? Or why take a visual approach to language?

JR & JC: All of us are interacting on a daily basis on so many platforms with language as visual stuff—words as shapes and colors, with or without photos or illustrations attached and, of course, containing all manner of ideas and pitches in advertising. It is a dynamic space for us to conduct our own experiments.

We like the idea of putting language out there as voices in the landscape. They’re sort of portraits but, if they function the way we intend for them to, they say more about the viewer than about the narrator or about us. We’re aware that the works operate as a mirror, and we play with language to allow the mirror to function. The viewers bring their sense of themselves and their role in everything to the experience of encountering this sign in this location at this moment. Their reading of it depends on what they see in that reflection. They almost accidentally reveal themselves.

CK: I am interested in hearing more about the “space” in which your process and projects take place…Given that your projects exist in different stages and forms, is there a moment when they are most “alive” and, if so, could you cite specific occasions?

JR & JC: The moment when they are most alive for us is right before we walk away.

We’ve installed the sign, and gotten the shots, and we’re leaving it to be encountered by its primary audience, the passersby, and do with it what they will. That’s not to discount the engagement with the audience in the gallery who encounters the piece as a photograph later. That’s why we make the photographs, to give more people a taste of that moment where it feels like the signs are addressing them.

CK: You use the highly suggestive term “intervention” to describe your work. Could you elaborate on your practice as such? 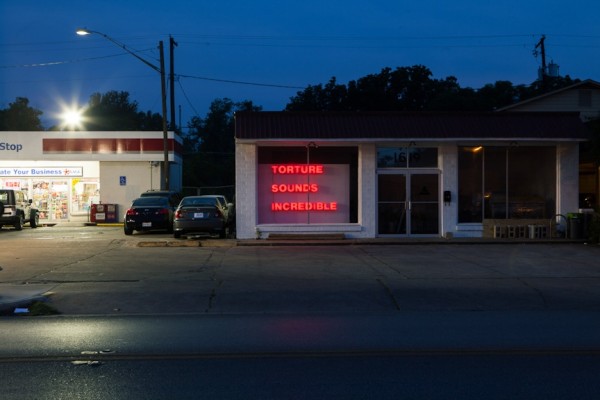 JR & JC: Well, unlike a lot of work that bills itself as intervention but doesn’t disrupt anything, ours actually is intervention. We’re not just reinforcing relationships that already exist. We want to interrupt some people’s lives, their routines, their habits, their schedules. Make them notice something.

CK: If you were commissioned by a corporate sponsor to install a piece of “street art” somewhere, can you speculate on how you would respond?

JR & JC: Are you asking: Would we do it? Sure. We’d look at the particulars of the situation—the geography, the budget, the window of time for installation—and find a way to make it interesting and take advantage of the opportunity. We are not interested in selling something or making advertisements, but we would certainly take the chance to use corporate money to make art. There is an imaginary line between art money and corporate money that people don’t want to cross, but in reality grant money is corporate money. 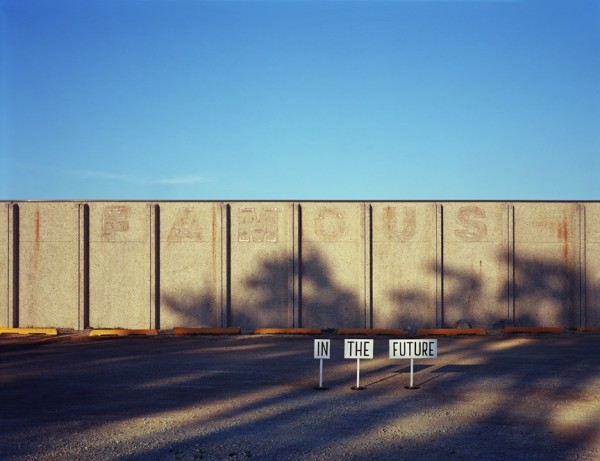 CK: Regarding In the Future (Joel Ross and Jason Creps, 2012, installed and abandoned, Bradley, IL), the photograph in and of itself offers viewers such a rich experience—the image existing beyond constraints of the photo as index—that it almost seems like encountering the art otherwise would be distracting. Also, the fact of flatness here (the art existing in the two-dimensions of the image rather than in the three-dimensions of the sculpture in situ) is persuasive. I’m curious to hear more about any theoretical perspectives on photography that you may have?

JR & JC: The line between subject and photograph is always blurred. The sign is the photo, and the photo is the sign, and the location is the site, and the gallery is the site. What’s interesting, hopefully, about these photos is that they’re both. If someones asks us if the photos are documentation, we say, ‘Yes.’ 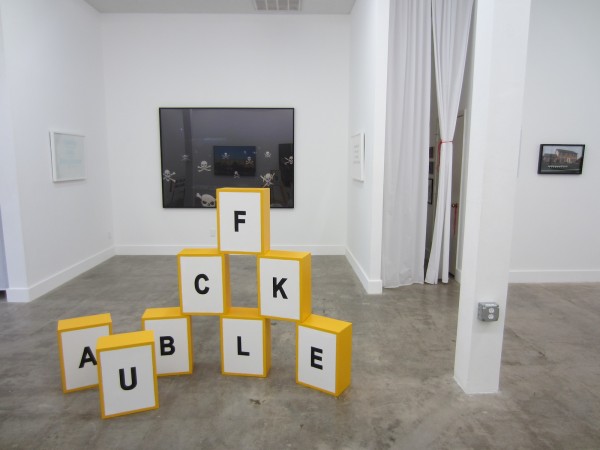 JR & JC: No, we decided that we’ll site and photograph that piece in Texas, but we haven’t found a location yet.

CK: If it sells as a sculpture, will it not also exist in the form of a photograph (i.e., other than as documentation of the sculpture in the exhibition)?

JR & JC: In that case, we will probably make a second version that is modified in some way. Trying something a little different. We very often make two or three versions of these things and don’t always show them, just destroy some of them.

CK: I’m also interested in the role of collaboration if it becomes a photograph, and in how a single work can straddle both solo and collaborative enterprises.

JR & JC: For us, the best way to explain that is to go back to the music analogy. Joel occasionally writes a song and takes it to Jason, but we usually end up changing it pretty radically before recording it.

CK:  I appreciate how Torture Sounds Incredible (Joel Ross, 2006, installed offsite: 1619 E. Cesar Chavez St., Austin), like other works in the show, engages politics, world affairs, and news events, while remaining open-ended. Placing torture in the bracket of “sex, drugs, and rock & roll” offers compelling commentary on US misdeeds (to say the least) and specifically on Abu Ghraib. Especially given that you “received a discharge from the United States Marine Corps in 1984,” I am excited to learn more about your choice to address the subject of torture and the context of the particular work.

JR & JC: A little personal background, which may or may not be interesting in relation to this piece: Joel was in the Marines, and his father was a cop. Jason’s grandfather was a cop. We’re very interested in hitting all of those notes that you mention above and Dorota mentions in her review.

CK: The project is now on site in Austin. Where did you first install it (and was it conceptualized specifically for that locale) and what has been its exhibition history?

JR & JC: The piece was not designed originally for that site, or with any particular space in mind. It has been shown previously only in gallery settings, in Miami and a couple of times in Chicago. We’ve always wanted to find a street location for the piece. A lot of different people have tried to find places for it but, because the language is so provocative, we’ve never been able to seal anything until now.

The politics can come off as “murky” because the text is so clipped, with no clue about the owner of the voice. It makes it difficult for the viewer to definitively establish the author. The voice keeps getting away from you. The language won’t stand still. It is the fact that the language repeatedly flips from positive to negative that gives it its charge. That makes a lot of people uncomfortable. Artists are often most interested in operating in those places where language gets overloaded.

One of the things we like best about the piece is that the sign is lush and visually appealing but one can’t look at it for very long before the mind chimes in with an unpleasant soundtrack of screaming. It’s a filmmaker’s trick to establish a feeling with the sound of something rather than the image of something. We’re looking at a closed door but we’re hearing sounds of extreme distress. Essentially, activating everyone’s horror with their own worst idea of what torture is.

At the end of the day, torture is pornographic. It is brutal. There’s a reason why we still torture people, and it doesn’t have anything to do with getting information from them.

[Editor’s note: a few days after this interview, the large window at Okay Mountain Gallery in Austin, where Ross and Creps’ piece “Torture Sounds Incredible” is sited, was smashed by unknown persons using a nearby cinderblock. The piece was undamaged.]