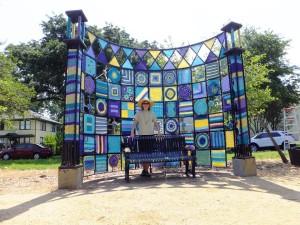 To celebrate International Yarn Bombing Day, Houston Heights resident Mary Goldsby coordinated a yarn installation to cover a metal structure that stands on Heights Boulevard between 16th and 17th streets. Yarn bombing is often installed guerrilla-style, creating warm and fuzzy surprise graffiti in unexpected locations, but Goldsby actually got a permit from the Parks and Recreation Department and enlisted a couple dozen volunteers for the project on June 8. Permission was granted for the public art project to remain on view for a month.

On Saturday evening, though, a vandal dismantled it and threw it all in a nearby trashcan. According to the community newspaper The Leader, two witnesses later came forward: one described her as a woman between 40-50 years old who seemed “angry” and another reported “an older woman, shrieking in anger as she did it…she seemed pretty crazy.”

Crime Stoppers is now offering a $500 reward for information leading to an arrest in the vandalism. A banner with the 713-222-TIPS number has now been posted on the structure. 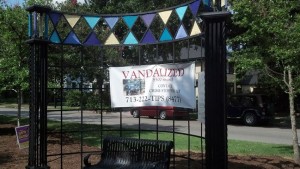 You Can’t Keep a Good Yarn-Bomber Down!

Maybe she has a thing for pot holders and blankets and finds this modern yarn bombing business an abomination.

The design at the top is still very nice

Now, the yarnbombers want to replace the vandalized empty spot with photos from people who visited the yarn installation during the week it was up. If you have some pics (print resolution), email them to [email protected] !

was the permit posted? perhaps they were angry at the thought of the act

How about she’s just a miserable old hag with nothing better else to do?