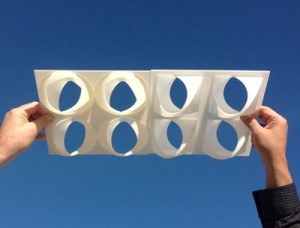 Yesterday morning, the Museum Tower in Dallas sent around a press release with the title “Museum Tower Engineers Develop Solution to Reflections on Nasher Sculpture Center” and now the Nasher-MuTo fight is back in the spotlight (or the glaring sunlight).

For well over a year, the two parties have been in dispute over the 42-story glass-covered condo building erected next to the Nasher, which reflects super-strong sunlight directly into the museum and its garden (and surrounding museums and parks, say most). After spending more than $1 million dollars (about the cost of the smallest unit in the building) on experts and consultants, the Museum Tower states that a solution has been found: just re-orient the light receptors (oculi) on the Nasher roof designed by Renzo Piano, described by D Magazine as “arguably the world’s greatest modernist architect, a man famous for reinventing the roof.” For a calming explanation of the Museum Tower’s simple “100 percent” solution, they have set up a website at oculisolution.com.

As to the effect on the outdoor gardens, the Tower’s experts have also concluded that the building doesn’t really cause any damage. In a Dallas Morning News article, the Nasher garden’s landscape architect Peter Walker, who also designed the World Trade Center Memorial at Ground Zero, called the comments “inconceivable” and “insulting” and said what they’re doing “is like a public desecration.”

The glare from Museum Tower is a problem for the entire Arts District, not just the Nasher Sculpture Center. Recycling the same grossly inadequate and deeply flawed idea in another publicity stunt is not a way to address the problems Museum Tower is causing for the people of Dallas. The bottom line is that the owners of Museum Tower need to fix their building.