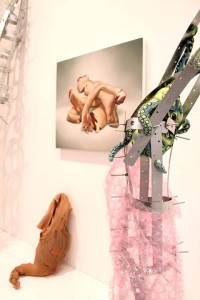 Installation shot of That Mortal Coil at CentralTrak

The sculptures of R.E. Cox are rarely exhibited, but they fit perfectly into the current group exhibition at UT Dallas’ CentralTrak gallery,  That Mortal Coil: Rebuking the Ideal in Figurative Art. Curated by Heyd Fontenot, the show reveals the cultural preoccupation with physical perfection through works that deal with the frailty of the body and the beauty that can be found within its failures.

Cox’s sculptures are scattered throughout That Mortal Coil like strange, prosthetic body parts. Made with a variety of materials, many are cylindrical or club-shaped, and most are enveloped in orthopedic compression hosiery like the artist had previously worn. In 1987, Cox fell from a grain elevator, suffered multiple injuries, and ended up in a coma for six weeks. Miraculously, he survived, but the incident, his recovery, and his ongoing problems with his right leg have influenced his sculptures.

As he was installing his work at CentralTrak, a bad staph infection was bothering him, but at the exhibition opening on May 11, he still cheerfully greeted visitors. Within two weeks, though, doctors told him they would have to immediately amputate his leg below the right knee.

The night before the procedure, Cox told Fontenot that he wanted to “keep his leg.” He was at peace with the amputation, he explained, but he really wanted to use the leg in an art piece. Upon discovering that state law allows him to keep the limb if he agrees to bury it through a mortuary service, Cox began to plan a burial performance piece, tentatively titled One Foot in the Grave.

There is no date yet set for the performance piece, but That Mortal Coil is still on view through June 29. “Cox worried that some might see this act as morbid,” states the recent CentralTrak press release, “but it’s a true testament to his enduring enthusiasm.” To erase any doubts about the artist’s optimistic attitude, CentralTrak has also posted this post-surgery, hospital bed interview with the artist on YouTube: