Artists Who Steal Art: When Is Appropriation Simply Theft? 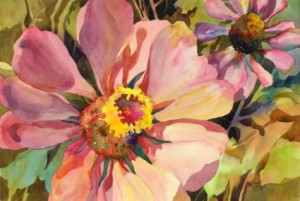 Kay Smith, an artist from Big Springs, Texas, was having a down day when she decided to cheer herself up by visiting the new T.J.Maxx in Midland. Perusing the decorative pillows, she found a zinnia floral pattern that looked freakishly familiar. It was slightly cropped, but it was definitely her work. The cropping just happened to eliminate Smith’s usual signature and copyright symbol. T.J.Maxx removed the pillows and apologized to Smith; the import company has not responded to her communications.

This story was reported by Ohio artist/blogger Corrine Bayraktaroglu, whose website includes an entire section called “Copyright: Wall of Shame,” in which she documents all the companies who have stolen her own imagery for use in advertising, album covers, t-shirts, and jewelry.

Many artists have reported similar incidents, most notably on Ebay and Etsy, the e-store for all things handmade and arty. Houston digital artist Alex Barber recently called out an unnamed Houston artist who “stole” from two other local artists to create jewelry now being sold on Etsy. Apparently, this practice is common enough that Etsy has set up its own help page to explain its “Copyright and Intellectual Property Policy.” Then there are hipster chain stores, like Urban Outfitters and Anthropologie, who have for years faced accusations of trolling Etsy listings in order to steal ideas and mass-produce items that have that handmade, arty look. Those accusations, if true, may be offensive and possibly illegal, but not too surprising from big corporations. Artist-on-artist theft, though, seems to hit some personal nerves.

Christine Jelson West, executive director of Lawndale Art Center reports that a local artist photographed the previous Lawndale building mural, cropped it and sent the image off to be printed on canvas. He then hung the “painting” to be sold as his own work at a local coffee house. This could all be some artistic misunderstanding—perhaps even a compliment or a statement (à la Sherry Levine) about “public art,” since West says that the two artists are now coming to an agreement about the work. “But really,” she adds, “who does this?”

seems like there should be a second part to this–about what these artists did, or should have done to protect their interests.

Thanks for sharing my story about “Christy’s Zinnias”. Devi Designs sold my original art to TJX and I’ve not had a response from them, but TJX stated they’d pulled all pillows immediately. Friends across Texas have visited HomeGoods/TJMaxx stores and have not seen any pillows. A friend in Midland, TX, did buy the poor pillow. To answer Tom Sale, what I’ve done is to watermark all images going online with more copyright notices (already have a Protected by Copyscape on personal blog, http://kaysmithbrushworks.blogspot.com/ so that is in place). Every image is resized as small as possible and low quality file, at 72 dpi. I have done all I can do at this point.

Not sure it is necessarily wise to state too much on what the artist is doing for legal reasons, don’t want to give away too much for those copyright thieves reading it. But like Kay, I have resized and watermarked images, deleted accounts or images on sites that strip away file name and meta data from images ( they are havens for copyright infringement), and filed dmca notices.

thanks for linking to my blog and sharing kay’s story.

The new TEKS (acronym for what must be taught in Texas schools) for Fine Art includes instructing kids about copyright law. If we can balance this with a very long history of appropriation in the art world, things should improve.

None of these are examples of appropriation art. The mural copy comes close, but because murals are publicly displayed, the piece is really more documentary photography. Everybody gets that the canvas is not the original.
Companies using artist’s work to adorn handbags and pillows and such is not appropriation because they are not making art, but commodities. It’s simply design theft.

When is it theft?