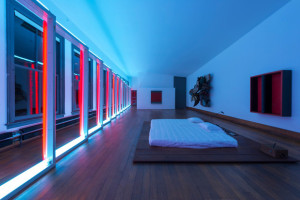 While it was quickly revealed to be a hoax by Detroit artist Tyler Taylor, for a short time last week, visitors to Airbnb were excited at the possibility of renting the recently restored Manhattan home of Donald Judd for a mere $2,000 a night.

But today, on Judd’s 85th birthday, the house at 101 Spring Street officially begins taking reservations for small public tours. In a NYTimes article, Roberta Smith called the five-story 19th-century cast-iron SoHo building where he lived and worked off and on for 25 years “the template for all things Marfa.”

So, no, you can’t actually sleep there, but the tours are a lot cheaper than an overnight stay ($25; $12.50 for students). Reservations can be made through the Judd Foundation.