by Paula Newton May 20, 2013
FacebookTwitterEmail

Those who have been following the work of Texas-based artist Lauren Kelley know that she sometimes uses Barbie dolls in her still photography, video works, and collages as a means to address issues of racial and feminine identity, youth and material desire.  She uses these toy dolls playfully and humorously, and with a very pointed wit. 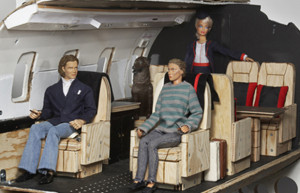 Now, the private aviation company VistaJet has hired contemporary artist Tom Sachs to create its in-flight safety video, and Sachs has teamed up with his former studio assistant, filmmaker Van Neistat, to create a stop-motion Barbie doll animation. If you happen to be a private jet-renter, keep an eye out—the video should be playing on board sometime next month. Kelley, Sachs, and Neistat all credit the influence of Todd Haynes’ now-infamous 43-minute cult treasure Superstar: The Karen Carpenter Story (1987), the weird and sad dollumentary about the 1970s drummer/singer.

Trying to catch up in the offbeat humor department, Mattel itself placed a tongue-in-cheek listing for Barbie’s Malibu Dream House on the real estate search engine Trulia.com a few months ago (for a mere $25 million). From the listing: “Designed as the ultimate bachelorette compound, it’s perfect for A-Listers, internet entrepreneurs, entertainment moguls and dolls of all ages who love to entertain yet want to relax and take in the never-ending ocean view.”

Barbie doesn’t really need that old place anymore because she’ll be moving into the “Barbie™ Dreamhouse Experience™, a 10,000 square-foot interactive installation bringing the iconic Barbie® Dreamhouse® toy to real life for fans of all ages” (description from barbiedreamhouse.com).  One opened in Sunrise, Florida a couple of weeks ago and another opened in Berlin’s main shopping district just last Thursday. 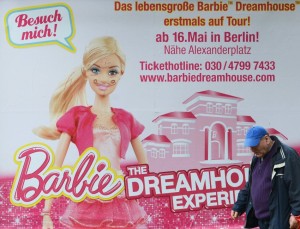 Some Berliners were not so enchanted and organized an Occupy Barbie Dreamhouse movement, gaining press attention and Facebook fans. “Our protest is not directed towards little girls and their dreams,” Occupy member Michael Koschitzki told NBC. “But, for us, this so-called Dreamhouse symbolizes the beauty craze and the discrimination of women in modern day life. It presents a cliché of the female role in society.”

Frida Kahlo Is a Now a Barbie Doll