Where the Border of Water Meets Air, Dragonflies Gather

by Kelly Montana May 17, 2013
FacebookTwitterEmail

This fall, in Dundee, Scotland, printmaking professionals from around the world will gather for the 8th annual Impact International Printmaking Conference. With the theme of “Borders and Crossings: The Artist as Explorer,” the conference hopes to delve into the possibilities of print as it relates to cross-disciplinary and cross-cultural practices. Where the Border of Water Meets the Air, Dragonflies Gather, an exhibition now showing at the Museum of Printing History in Houston, responds to this theme in celebration of the forthcoming event. 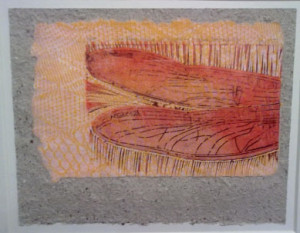 Sarah Caffey, My Pterostigma is Enjoying a Glide Through Life

Borders and artistic responses to them are provocative, whether in Texas or Scotland. But in Where the Border of Water Meets the Air, the border in question is entirely uncontroversial. The show’s curators, printmakers Dana Eicher and Suzanne Thea, extend the conference’s theme into a metaphor for an artist’s existence. Just as the dragonfly must navigate both water and air, artists are pulled between their own creative forces and the mechanics of the art economy that binds them. For this exhibition, printmakers were invited to respond to the dragonfly theme with an 8’’x 10’’ print.

Sarah Caffey’s linocut and intaglio My Pterostigma is Enjoying a Glide Through Life speaks directly to the nature of an artist’s career.  Handmade paper is printed with the transparent, complex patterning of a dragonfly’s wing. Smaller dragonfly wings are printed atop the pattern in red. Of the work, Caffey writes that the repetition in the dragonfly wing mirrors an artist’s career, “producing work, finding shows, submitting work, displaying work, producing work, producing work.” This is a long shot at best, considering there is not much that suggests repetition in the work itself, unless Caffey considers patterns of any kind to be indicative of artistic production. 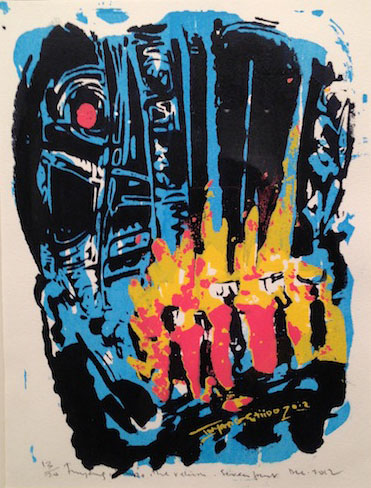 Etiido Effiong Inyang’s serigraph, The Return, didn’t follow the theme: it depicts five women returning from a stream carrying jugs of water on their heads, silhouetted against a red and yellow sun, with black pools of shadow at their feet. Inyang’s accompanying artist statement references the dragonfly, referring to its place in Ibibio culture (of Nigeria) as an environmental watchdog.  But he does not attempt to make any neat analogies between the dragonfly and the work presented, merely asking us to consider how environmentally-sound practices differ from culture to culture. 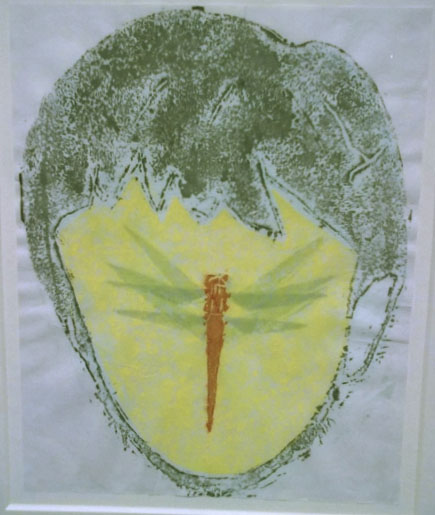 Unfortunately, most works in the exhibition don’t stand on their own as forcibly as Inyang’s does. For example, Satoshi Takahira’s woodcut, Dragonflies, is a reprinting of a dragonfly onto work he made as a child. Malone Dietrich’s Untitled is a copperplate etching of a wooded landscape with the outline of a single dragonfly wing across the water. These two prints are undoubtedly previously completed works with dragonflies added specifically for this exhibition, as are many of the works in the show.  The artists were asked to respond to a theme, and they did, quickly, in an easy-to-mail format.

This responsiveness points out a missed opportunity. Prints can be made quickly, in large quantities and disseminated with ease, making the medium inherently political. In tasking artists to ponder the indiscernible space where water meets air, this exhibition misses the big picture. 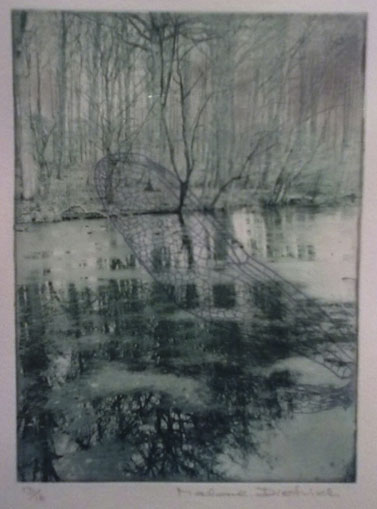 Where the Border of Water Meets Air, Dragonflies Gather will be on view ath the Museum of Printing History, Houston through May 25.