The Image Extends Past the Edge of the Plane: an Interview with J. Parker Valentine

by Katie Geha May 8, 2013
FacebookTwitterEmail 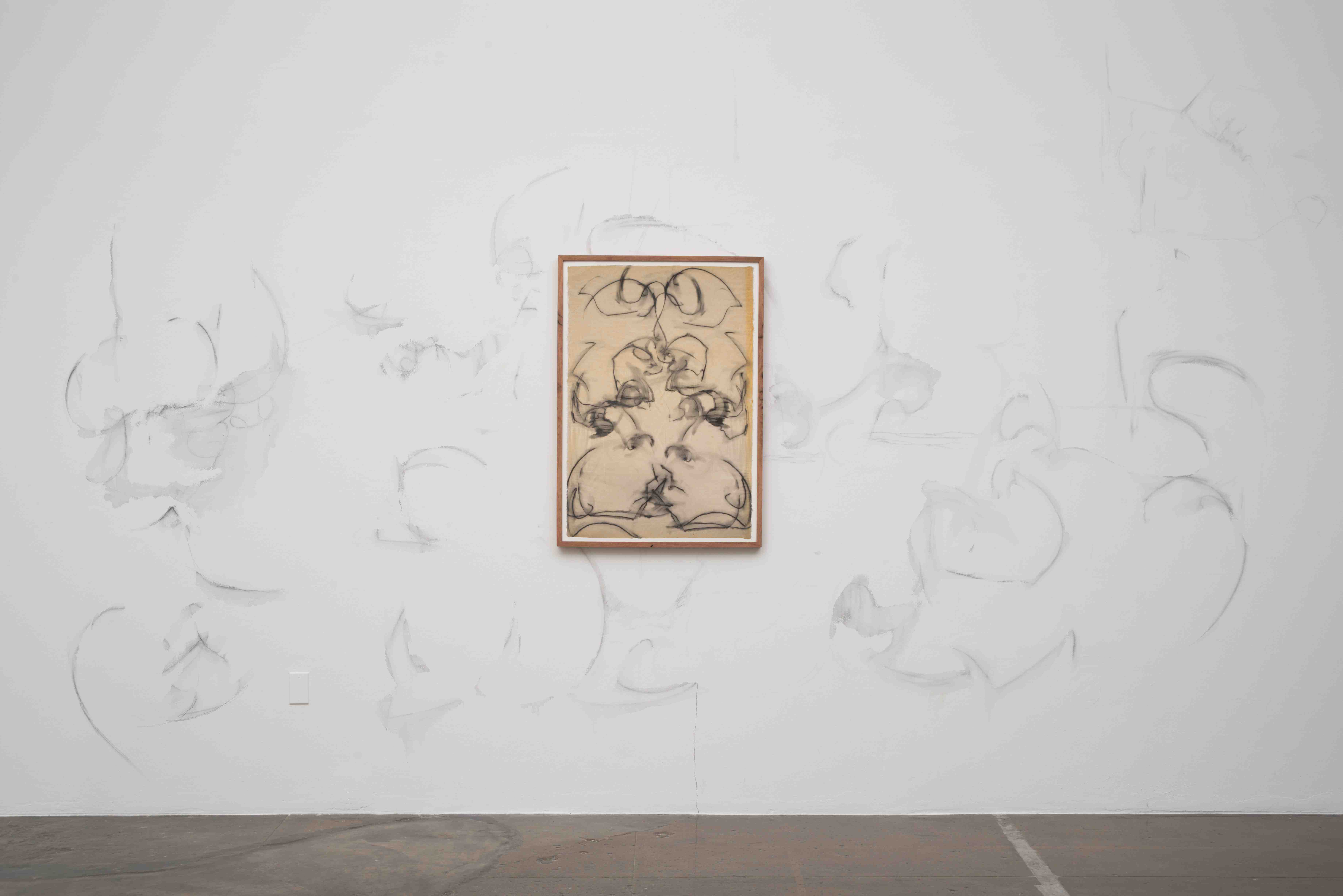 J. Parker Valentine is an artist who lives in Austin, TX and New York City. Her recent show at Artpace San Antonio extends her drawing practice through sculpture and photography. Via email, J. Parker Valentine and I discussed her Artpace residency, the influence of sci-fi and Texana and the art of caricature.

Katie Geha: Tell me a little more about how you worked during the Artpace residency. Was it similar to your studio practice in New York? Different?

J. Parker Valentine: My studio practice since moving to NY from San Francisco in 2007 has been pretty nomadic. When I haven’t been working from home, I’ve had a studio in different parts of Brooklyn, but never for more than a few months at a time. And for the last couple of years, I’ve spent time back in Austin, where I’m from, working there. For solo shows that I’ve done away from home, I’ve traveled with my materials and set up shop in that location.

KG: So your practice is very much influenced by the space in which you’re working?

JPV: Yes, definitely. For my 2010 show at Supportico Lopez, I worked in a room at Archive Books for a few weeks, then moved all the work into the gallery, where I worked for another week or so. Archive Books is an amazing and very dark space, a series of rooms with walls that show many layers of history. I set up a light that only lit up part of the work at a time—it was like drawing in a cave with a torch. For my 2010 show in Kyoto, I lived and worked fairly reclusively in a traditional Japanese house for a month, with no actual studio but with lots of tatami mat floor space. For both these shows and every show I’ve done, the work came out of the working experience of the place and its constraints, and most often for me, a larger part of the work then happens in the actual exhibition space. The experience at Artpace would be a continuation of this type of practice. The studio was bigger and the support of the staff was more than I have ever had, so I was able to get a lot done. 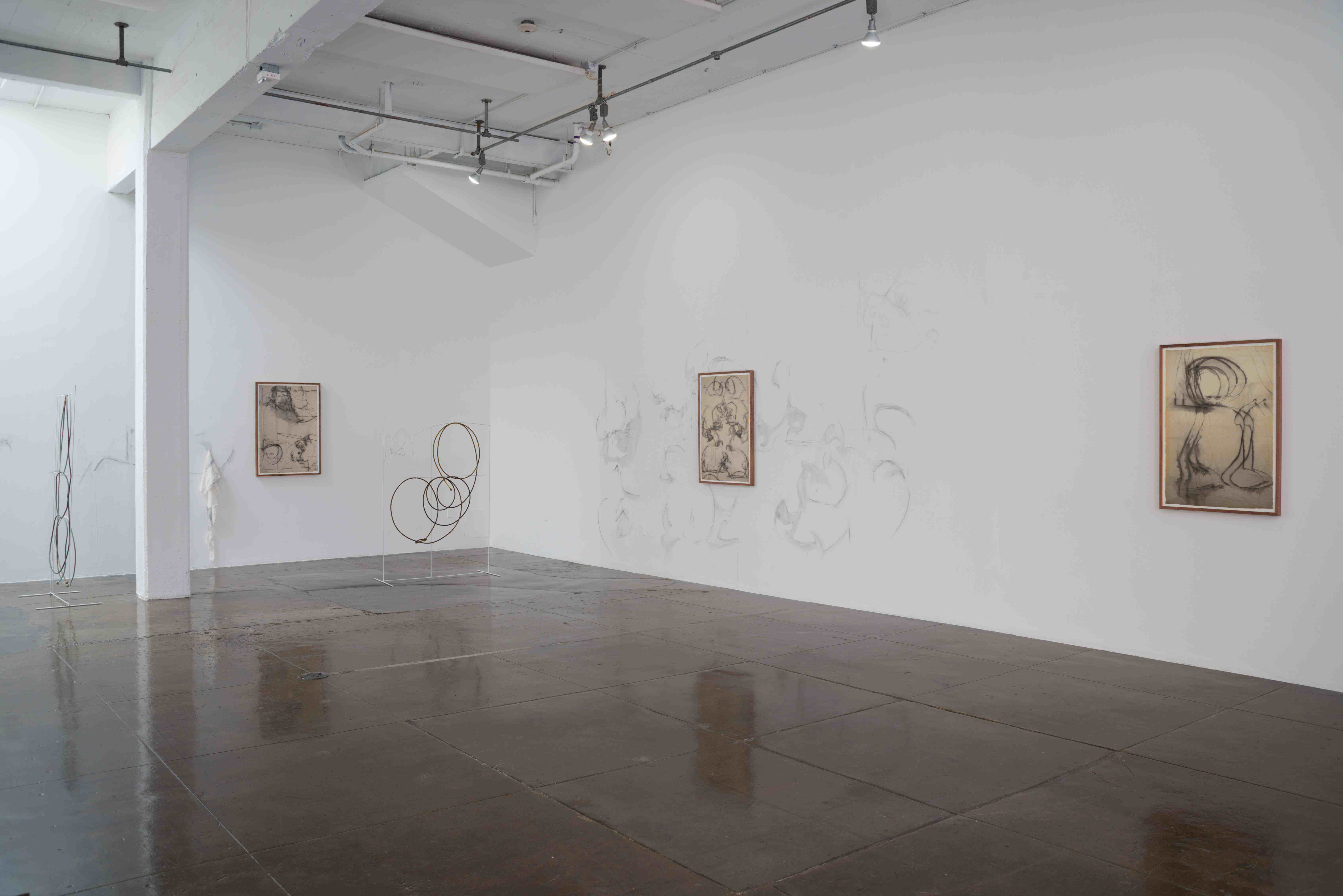 KG: What about the conversations with the other fellows at Artpace? How did that influence your process or thinking? Or did it at all?

JPV: The studios are set up so that two are downstairs, fairly open to one another, and the third is upstairs and more private. Adam Putnam and I had our studios downstairs and there were affinities at times. We were both using wheels in the studio at one point. He had constructed a moving platform for taking video footage in his space, and I was on roller skates to move around the building and studio more freely. There was something about the big concrete-floored space that called for more mobility. I was also taking footage of freight trains every day, and simultaneously was working on an idea for a device for a stage light that could slide to-and-fro to focus a shadow, influenced by the mechanism of the wheels on the track. I was playing with the giant linear shadow of a pencil cactus, which was an extension of an idea from earlier work. Light and shadow are prominent in Adam’s work and maybe there was some influence there. I had great interactions with both artists and learned from both of them, but maybe only by proximity. I spent more time with Adam’s studio practice. In the final panel discussion, Suzanne Cotter, the curator of the residency, mentioned that catastrophe and theatricality were aspects she took note of between the three of us.

KG: Theatricality makes sense in terms of your installations—the set-ups or the arrangement of the works in relationship to the sculpture.

JPV: I don’t think my work is blatantly theatrical, but in order to present the artwork in this type of context—in particular the studio-cum-exhibition space context—I felt the need to stage the work to a degree. Staging is really a way of pointing out something by editing out everything else, or putting that to the side. A large part of my work comes down to deciding on or developing new presentation tactics—but they are subtle.

KG: Did the drawings and the sculptures develop together or independently from one another? Drawings first? Sculptures first?

JPV: The sculptures developed later. I had the lassos lying around and was thinking about how to show them until the last few weeks. The metal structures that now hold the lassos were based on line graph forms. I was collecting science-based line graphs throughout the residency. The show has somewhat of a sci-fi-meets-Texana leitmotif.

KG: Really? I guess I can see the Texana, maybe with the metal sculptures, but I don’t get a sense of the sci-fi. Can you explain more?

JPV: Shit…I mean, there is a print of a robot wearing a cowboy hat…I also used images of graphs that come from catastrophic orbital graphs and other astronomical and physics-based line graphs in the prints, and derived the sculptures from them. The title of my show, Failure Envelope, comes from these types of graphs. I think my drawings are always sci-fi in a way, or maybe that is my own interpretation? 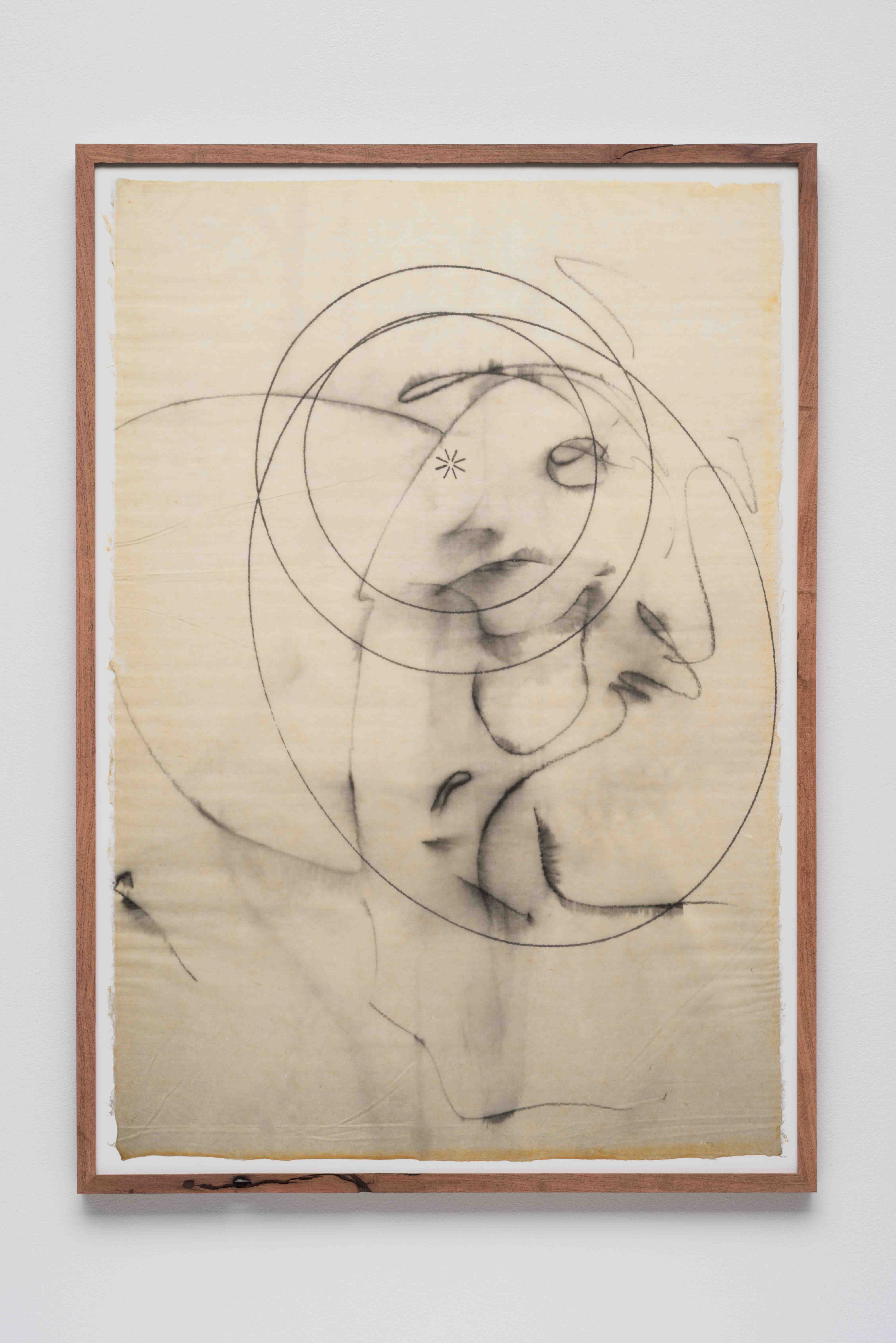 KG: That makes good sense. I just don’t normally equate gestural drawing with a sci-fi aesthetic. At any rate, I like the idea very much of the studio as a stage as well as the fact that you left the mark of the graphite on the wall so that the sense of the process literally bleeds through the exhibition. What about the shadows you mentioned earlier? I know in a recent body of work you were playing with the shadows a towel in your bathroom made—great photos of these kind of funny profiles. I got a sense of those characters in your Artpace show, or the ability to recognize faces in many of the drawings. These figures were especially apparent when I walked back and saw the drawing or print from afar, and even more so when I took a picture of the image. I’m wondering what you were thinking about in terms of shadows, representation and the ability (desire?) to anthropomorphize abstraction.

JPV: A certain work of mine can be looked at in several ways: maybe as an abstraction, maybe as something figurative (animal or human), maybe as another object that seems recognizable and probably more than one of these things at once. It’s the nature of drawing to be the overlapping and intersecting of lines in which different images can exist simultaneously. This dynamic quality of drawing can insinuate past, present and future within one image.

KG: And what about the characters I perceived in the photos?

JPV: I consider the towel portraits more as caricatures than characters. I read an essay yesterday in by Nicolás Guagnini on Mike Kelly in which he said “the caricaturesque is…a perverse mannerist machine in feedback loop mode that preempts style.” I took what the author said to mean that caricature is not a style, but a tool. Caricatures exaggerate the human form into other forms found in nature—another means of portraying something as being more than one thing at once.

KG: Okay, I can see how the figures have the style of a caricature—for instance, they seem exaggerated for the sake of exaggeration. But what are you exaggerating? Or are you just mimicking the style? For instance, in Tala Madani’s work, her figures seem to be some kind of caricature of sort of anonymous Middle Eastern men.

JPV: Tala’s figures are more specifically caricatures. Each of mine comes from a memory of something familiar, but they are not specific to anyone. The material creating the shadow—the towel—creates exaggerated, almost billowing forms, and they were mostly created by chance. I’m more interested in caricature as a descriptor for the outcome of these, more than for their making. 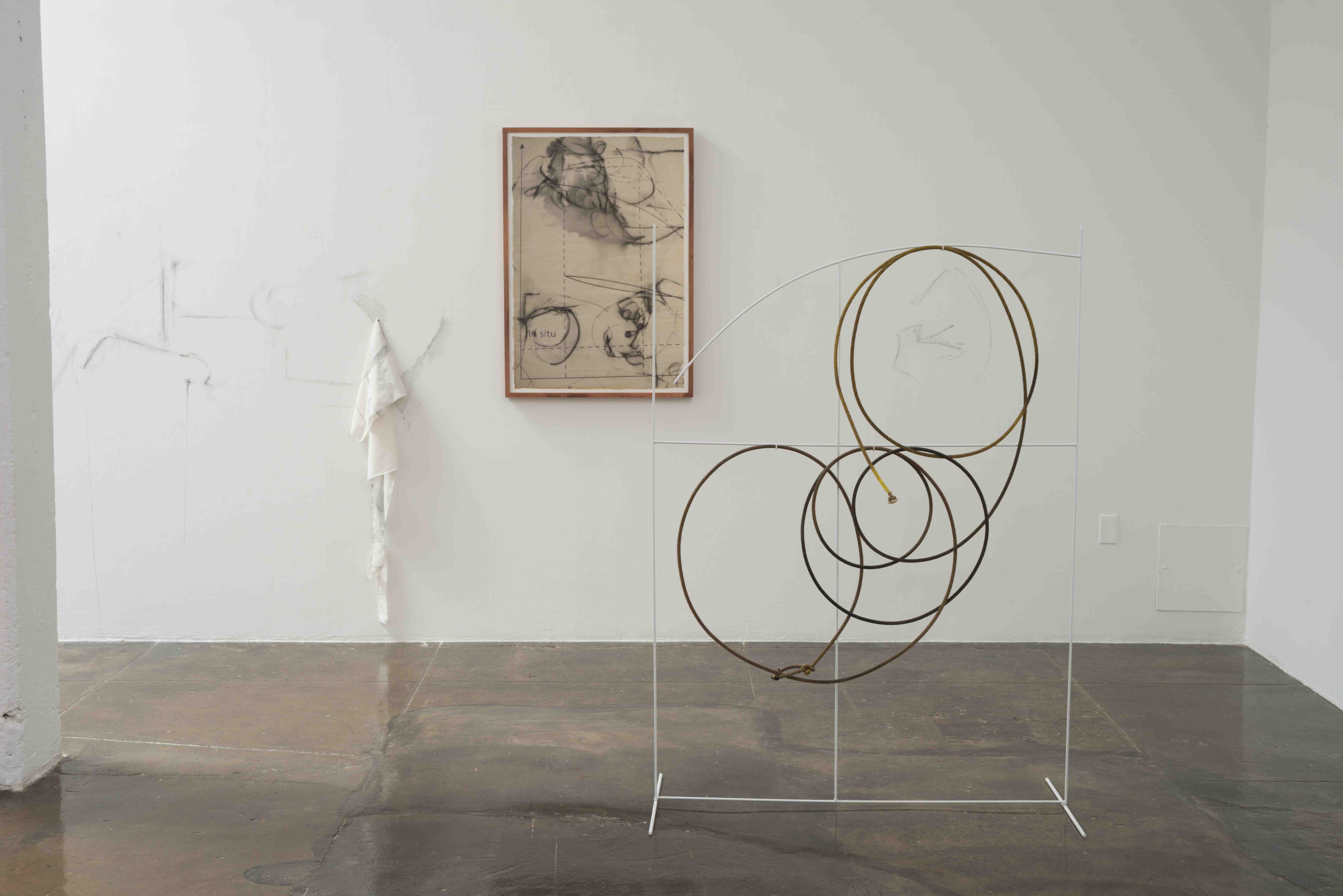 KG: I really like what you say about drawing—that it’s constantly changing. Your drawings, for instance, always look like the dregs of the process are a part of them…I suppose what I mean is that they don’t seem fixed, but have a sense of transition. What are the white towels hanging on the wall? Did they have to do with the making of the drawings?

JPV: Katie, which white towels affixed to the wall? Do you mean the white fabric on the wall hanging in my show?

KG: Yes! Maybe I was just stuck on your towel photos. I was thinking that the fabric gives the show dimension. I like that vignette in the right-hand corner of the space of the drawing, the fabric and then the sculpture—that there are three levels of sticking-outness, for lack of a better term. That was one of my favorite arrangements in the show.

JPV: The pieces of fabric hanging on the walls are remnants of the large drawings on muslin—the starting point of all the work for the show. I drew with graphite and water on large sheets of muslin, making distinct impressions on the wall beneath; copies. I chose to show only a few drawings on fabric out of many I made because there are already representations of the drawings on the wall and in the prints. I think you are describing one piece of fabric that hangs loosely from a pushpin. As I worked on these drawings on fabric, I ripped them down into smaller compositions. I learned this by watching the staff at the fabric stores where I bought the muslin. They snip it with shears, then they rip it and it tears in a straight line. I had a large drawing pinned to the wall, and after tearing it down, the strip stayed connected to a pushpin, and I left it there.

I suppose the drawings do look like dregs. I’m not dressing them up. Drawing is most often considered a prototype or under-layer to another medium. Muslin is used for pattern-making for clothes. It’s financially economical to use these materials together, but it is also economical as a way to communicate form. The drawings on muslin were a starting point for translations in other media, but they are viable in themselves. I’m currently using the remains of the fabric drawings that I didn’t show at Artpace, working further with them, sewing them, and making them three-dimensional with wire.

JPV: Yes they are photos of drawings taken during the drawing process—because the drawings develop or change orientation or are ripped down the middle, the photos are of drawings that do not exist anymore. The prints offer an opportunity to reuse the visual material, to change orientation, to make new connections. The prints are on a type of paper that has been soaked in oil, making it transparent. There is a print on the back and on the front, and because the paper is transparent the images merge. I worked with Hound and Hare Press in San Antonio to develop a way to do this. It was also a challenge because the paper is handmade and has fibrous edges, and I wanted the images to bleed onto these fibers, in the same way the drawings do on the fabric that has been torn. The image extends past the edge of the plane—if a wrinkled up piece of fabric can be called a plane.