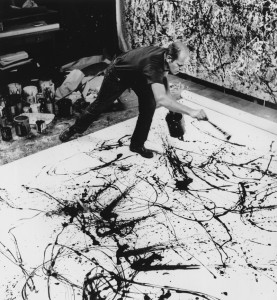 The Independent (UK) reports on recently revealed information that the CIA promoted American avant garde art as a tool for cold war propaganda in the 1950’s. Claiming to have information from “former CIA officials that the “CIA fostered and promoted American Abstract Expressionist painting around the world for more than 20 years,” writer Frances Stonor Saunders goes on to admit how improbable it seems, given that many of the artists whose works were (unwittingly) used as anti-Soviet propaganda were or had been communists, and shows how, ironically, it was the American public’s rejection of avant garde works that forced the government to promote them clandestinely, rather than openly.

Hasn’t this been common knowledge for decades? Serge Guilbaut’s How New York Stole the Idea of Modern Art: Abstract Expressionism, Freedom and the Cold War was published in 1983, after all. It was his research that started revealing a lot of this. Subsequent research has been published here and there ever since, and written about in in high profile venues. See for example http://www.nytimes.com/books/00/04/23/reviews/000423.23joffet.html from 2000, or this http://www.newyorker.com/archive/2005/10/17/051017crat_atlarge in the New Yorker from 2000.

Personally, I think sponsoring exhibits of American art (and not just Abstract Expressionism) in Europe and around the world was one of the best things the CIA ever did. No one got hurt by it, and people in other countries got a chance to see America at its best.

I’m not sure why this is “improbable.” Art is one way that culture is expressed, documented and exported. It seems like the CIA was trying to speed that process to their own purposes, sure. To your point, Robert,it’s not necessarily a terrible thing — although we may question the CIAs motivations. Just because the artists themselves ascribed to communist principles doesn’t mean that their art wouldn’t have been appropriated and used by institutions for other purposes. It just means that there is a disconnect between the meaning that the artist intended for the work and the way the institution interprets it for the viewers. This is a good lesson to question the little white plaques in every institution — to dig deeper — because each one has its own agenda and motivations. The CIA is no different.

The article linked to in this news item is from 1995. And as Robert Boyd points out, this has been well-known for quite some time.