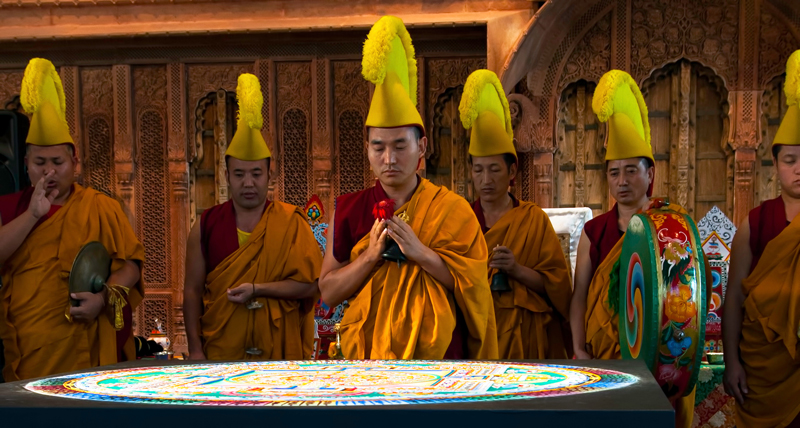 Like the swallows of Capistrano, the Drepung Loseling monks return every year to The Crow Collection of Asian Art in Dallas to spend a week creating a large sand mandala, a sacred Tantric Buddhist artistic tradition. On Saturday, April 20, from 3-5 p.m., the monks will perform ancient rituals to bless the space in the downtown Arts District.

The first step in this religious group endeavor is drawing an outline of ancient spiritual symbols and geometric shapes onto a wooden platform. Next, the monks meticulously pour grains of brilliantly-colored sand through small metal funnels onto the platform. Mandalas are created to symbolically heal all living beings and the environment. You can view a time lapse video of the process from start to finish on the Crow Collection’s website. 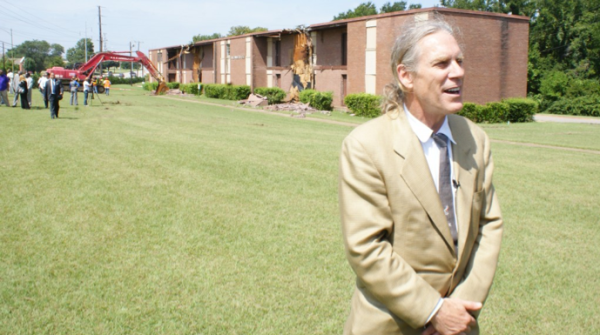 Dallas has been a regular stop on the monks’ busy touring schedule, thanks to Dallas philanthropist Trammell S. Crow, president of The Crow Family Foundation, which operates and manages the museum as well as the adjacent Trammell Crow Sculpture Garden on the ground floor of the Trammell Crow Company’s high-rise headquarters. The 61-year-old Crow is in charge of overseeing the development of the museum, which was established in 1998 to showcase the acclaimed collection of Asian art amassed by his parents, commercial real estate developer Trammell Crow and his wife Margaret.

Watching his parents’ collection grow ignited in the younger Trammell an interest in Asian culture. While earning a degree in economics at Yale, Trammell studied Chinese religion and history. He struck up a friendship with fellow student Alex Kerr, who is today one of the world’s most celebrated Japanologists, as well as an award-winning author and collector. Following his studies at Oxford as a Rhodes Scholar, Kerr worked in Tokyo for eight years for the Crow family to acquire works of art for their expanding collection. 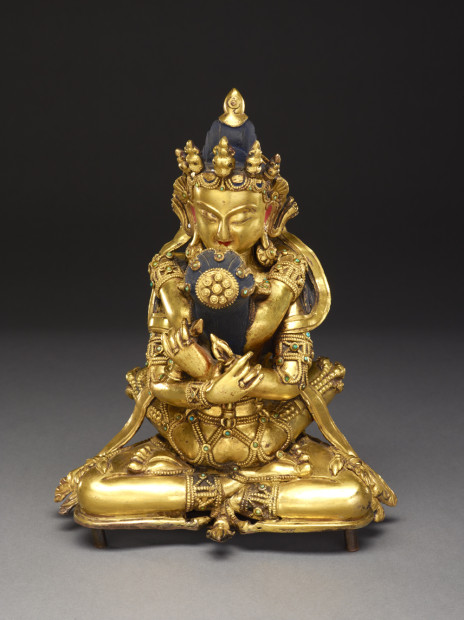 Following the deaths of his parents, Trammell carried on the family tradition of collecting Asian art. Recently, he purchased from the prestigious Buckingham Collections eleven Tantric Buddha sculptures dating from the late 17th through the early 20th centuries. The ornate copper alloy sculptures are on loan to the Crow museum for their current exhibit Noble Change: Tantric Art of the High Himalaya which is on display until January 5, 2014.

To celebrate the impermanence of the universe, the sand mandala will be dismantled and the sand scattered at Turtle Creek at sunset, before the monks move on to Fox Valley Technical College in Appleton, Wisconsin to do it all over again.