The art collective Temporary Services’ exhibition at The University Galleries at Texas State in San Marcos acts a tutorial for the social art practice the group engages and promotes. The show presents three interactive projects that are representative of the group’s interest in “service” or presenting art as a useful and productive act rather than serving its own ends. That is, the group instigates projects that exist largely outside of the gallery system, presenting information as a useful tool that can also exist as an artful experience. 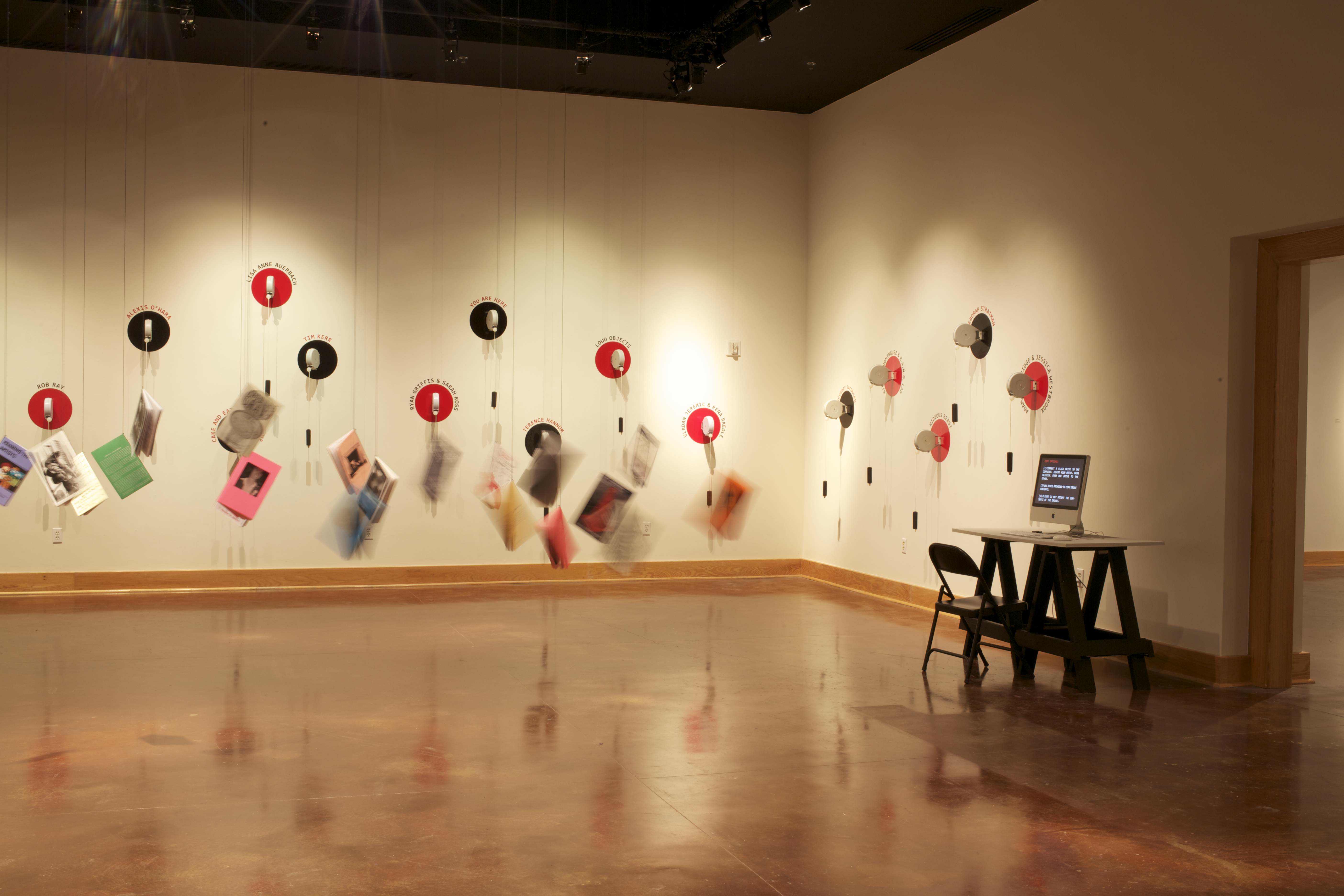 Information is Temporary Services’ mode of delivering works of art,  and it is presented in the guise of the ordinary: a booklet, a poster, a computer screen.  Information is what we depend on to run our daily lives. We check the time or the weather report; we read the newspapers or make a telephone call, but the effects of information are not  mundane. Information can be an artistic experience, one that results in change, and, in this case,  the ordinariness of its presentation heightens the impact of its content.

Temporary Services is currently comprised of three members–Brett Bloom, Salem Collo-Julin and Marc Fischer and is based in Chicago, Copenhagen, and Philadelphia. When I was a graduate student at the Art Institute of Chicago, I took a course taught by Brett Bloom called “Alternative Curatorial Practices” and it was certainly this class that prompted me to create the apartment gallery, SOFA, that I ran for four years. During the course, Bloom asserted again and again that art did not have to be made for or be presented in the so-called white cube of the gallery. While it would seem the group’s projects might lose their potency by their placement in the University Galleries, the group is successful in encouraging interaction throughout the exhibition, the prompt to receive information as an artistic act on the part of the viewer. 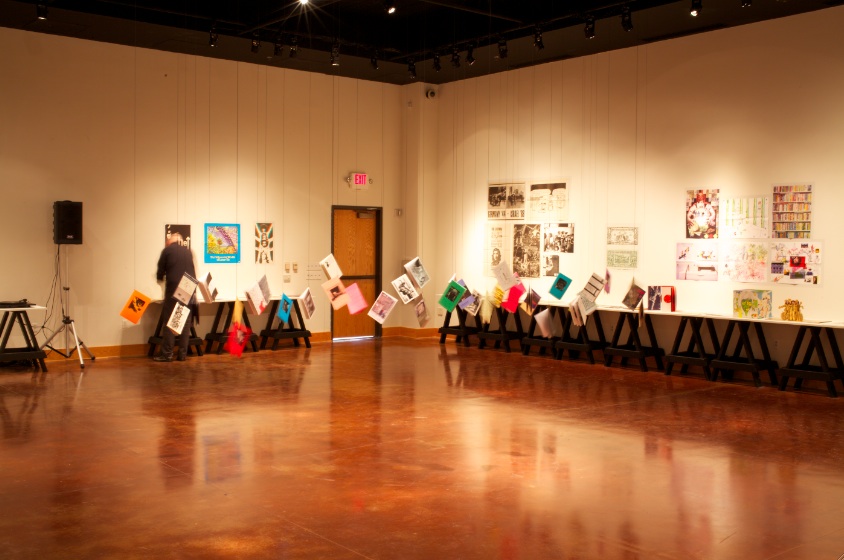 Designated Drivers is a neatly rigged set of artist curated USB drives that can be pulled from the wall, connected to a computer, and available for download on blank CDS. I watched three lyrical and lushly abstract videos by Chicago artist Terence Hannum that portray a noise show as a romantic mediation on sound and color. Another project, Interactive Records is a set of 12” vinyl records in white sleeves placed next to a record player. Students and gallery visitors can choose records such as Neil Diamond’s Shilo or Alice Cooper’s Billion Dollar Baby to play. The records were chosen for the often-radical art or re-conception of the presentation of the record sleeve that accompanied the 12” and are on display on tables lining the walls. The Rolling Stones Some Girls and Beast of Burden playing throughout the gallery immediately activated the space, transforming the white cube into a rollicking den of cool. 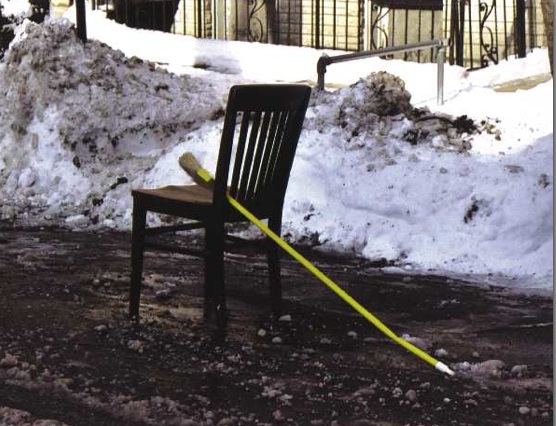 The Booklet Cloud displays self-published books and zines that exist as documentation of a variety of projects, almost all of which can be downloaded from their excellent website. One text is a taxonomy of the modification of shared spaces as seen, for instance, in Chicago when people place a chair or some large object on the street to save their parking space. Another text asked a prison inmate to draw and describe prison inventions such as a homemade tattoo machine. While another small book detailed the research behind the group’s Binders Project, a portable exhibition placed in binders, easily transportable and available for immediate install.

One of the main tenets of Temporary Services is that art and life are not separate or that a roadside memorial is just as artful as a painting by de Kooning. And the service they provide is one of information. The precedent for this social action art project can be found in the work of artists of the late 1960 and 1970s. Gene Youngblood’s text Expanded Cinema was published in 1970 and he defines information as consciousness-raising, as art that helps us to “perceive new relationships at work in the environment, both physical and metaphysical.”[1] In the new media ecology any divisions between art and life will collapse: “Art has obscured the difference between art and life; now life will obscure the difference between life and art.”[2]

The same year Youngblood’s text was published the Museum of Modern Art opened an exhibition entitled Information. Curated by Kynston McShine, the show struggled to present information in an institutionalized space. The museum was essentially turned into a laboratory of new technologies. No longer just a pure artistic space reserved for ineffable experience, the galleries were promoted as a science fair for the artistically curious. [4] 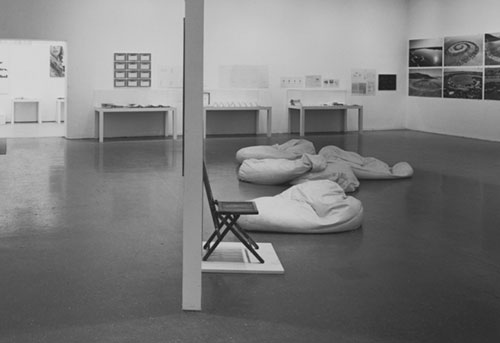 “Information” exhibition at the Museum of Modern Art, New York, 1970

The exhibition included work by Dan Graham, Yvonne Rainer, Robert Smithson, and Yoko Ono. Vito Acconci had his mail delivered to the museum. Christine Kozlov submitted a telegram: “PARTICULARS RELATED TO THE INFORMATION NOT CONTAINED HERIN CONSTITUTE THE FORM OF THIS ACTION.”  Joseph Kosuth’s famous One and Three Chairs made an appearance. A chair, the photograph of the chair, a definition of “chair.” The desired effect of this information art was to create an experience more active than just looking at a painting or inspecting a drawing. To engage with a work, rather than to passively view it, was paramount. In the Information catalog, Lawrence Weiner described the set of terms for creating a work of art:

Each being equal and consistent with the intent of the artist the decision as to condition rests with the receiver upon the occasion of the receivership.[5]

Thus, not only is the viewer responsible for engaging the work of art, it is also up to her to make sense of the work according to her own terms. The artists in Information would not be handing out meaning.  Rather, the work required from the viewer an engagement with the processes of language, pictures, and data. The show avoided traditional aesthetics, and, instead, allowed for a personal interaction with ideas, concepts, and new forms of communication. It was a way of experiencing art through the very facts of daily life.

Just as in the Temporary Services’ exhibition that features a record player, usb drives, and a computer, the artists in Information allowed the devices of day-to-day life to enter the museum. By their very placement, these objects of convenience and technological advancement took on a new resonance. They made the museum more like ordinary life. In his review of the exhibition, art historian and critic Gregory Battcock explains that the museum is no longer a neutral site for hanging works of art: “The new curator is more concerned with communication than with art; he is interested in information processes primarily and his job is to try to accommodate his new concern to the traditional structure and ambiance of his medium—the art museum.”[6] That is, the art museum became a self-conscious site of art making as well as a space for sharing information.

It is the thread of Information Art that Temporary Services picks up in their projects which act as a dispersal of ideas and collaborations with other artists and thinkers. They make their work transparent, often through the zines they publish to accompany and to describe their projects. It is fitting then, that this exhibition exists not in a commercial gallery but instead at a university, a space designated primarily for learning. I would have liked to see the group create a project or book with students or somehow more immediately called into question the University Gallery space. As it is, however, this information, existing as relatively mundane things in the world, presents to students and faculty a welcome alternative to exhibition practices.

[4] There were a variety of exhibitions in the United State and abroad that were exploring new media in the arts. Prior to Information, the MoMA mounted The Machine as Seen at the End of the Mechanical Age in 1968. That same year, The London Institute of Contemporary Art displayed Cybernetic Serendipity: The Computer and the Arts. Finally, in the fall, preceding Information, Jack Burnham curated Software: Information Technology: It’s New Meaning for Art at the Jewish Museum of Art in New York.

[5] From an Installation shot of the exhibition. Accessed at the MoMA archives, Information exhibition archives #934.

I have been to a few art museums on the west coast and they have always been very “white cube” The thought never crossed my mind that art in a museum could be viewed in any other way.
Very eye opening post!