Surface Tension, the current show at MASS Gallery, is a quiet and considered study of the work of three artists. The photography and paper works on display relate to concerns that are most often relegated to the tradition of painting—the interplay between depth and flatness, the materiality of the medium, and the line between abstraction and figuration. 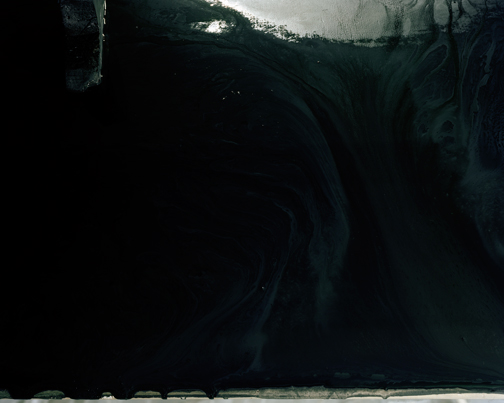 Brooke Berger, an artist who lives in San Diego, most directly addresses the theme of “surface tension” or as curator Erin Curtis describes it, “the illusionistic depth created by perspectival forms or hyper-real representation.” The photographs are titled according to their subjects–everyday construction materials like rubber or bricks or cement board. Every title also includes “light,” an intangible material that is the basis for all photography. And it is the quality of light in these images—glittering or slightly obscured or refracted off a mirror—that transforms these basic items into transcendent abstractions that push and pull against the inherent flatness of the photograph. “House paint, cement board, and light” is a stunning image. The paint creates a cloudy swath of black and grey, the edges are loose, paint drips down as a small patch of light emanates from behind the density of black. It’s one of the most painterly photographs I’ve ever seen. 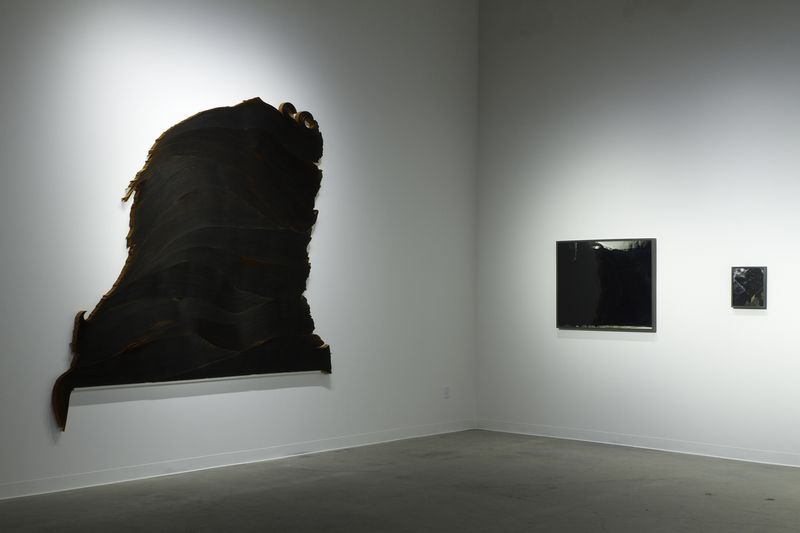 Installation view of Jarrod Beck “Rifting,” (on the left) ink on paper, 2013

Adjacent to and also across from Berger’s photographs are two paper works by Brooklyn artist Jarrod Beck. The first work is a large piece of black paper with white hatch marks covering its surface, appearing like some kind of tedious marker of passing days. Unfortunately, the piece would function much better had it been activated or installed in such a way as to suggest a relationship to the architecture of the space—on the floor for instance. As it is, the large rectangle seems to hang in space unrelated to the works that surround it. More compelling is Beck’s Rifting, a complex series of cut paper laid on top of one another and resting on a small ledge. The work crawls up the wall like a living thing. From far away it is a strange dark shape; up close it’s a pile of delicately placed paper. 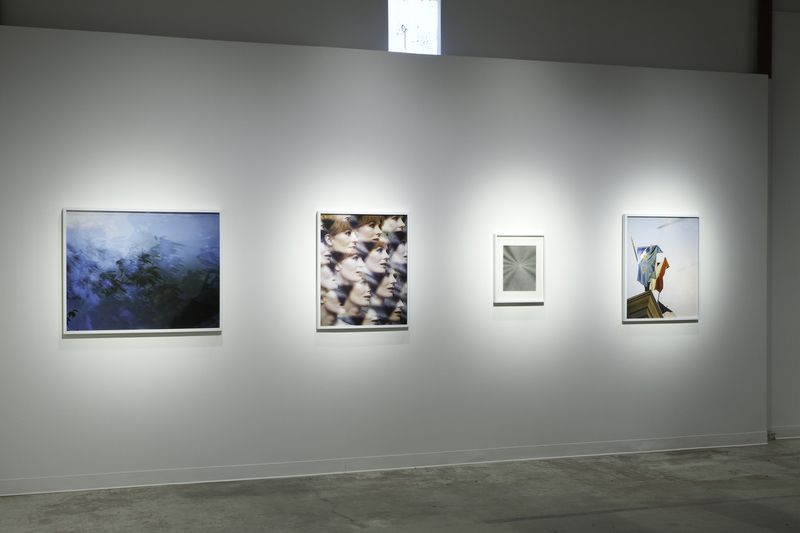 Austin photographer, Anna Krachey, is a master of looking at an object and emphasizing its abstract qualities. This turn towards abstraction often occurs through her approach to color, saturating, subduing, or adding a sheen of neon. In this installation her work benefits from its context. Viewing one work next to another elicits a reading that is fuller than a single photograph on its own. Take for instance Krachey’s kaleidoscopic portrait of Vanessa Redgrave, Multiple Actresses, an image pulled from the 1977 film Blow Up. The photograph is a romantic representation of a famous beauty, her profile layered upon itself creating a luscious Redgrave grid. On its own it feels slightly like something one might find on Tumblr, an image to scroll quickly past. Placed next to a small photograph of a black and white spiral and an abstracted image of flags billowing from a building, the Redgrave photo suddenly become unstable, it turns weird. 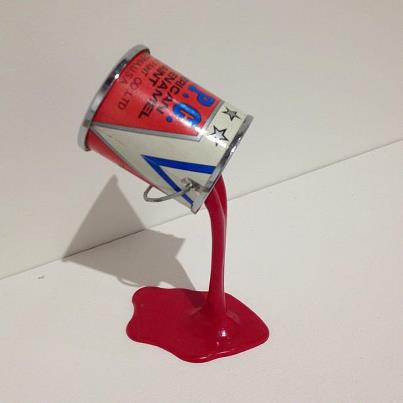 Paint can bank chosen by Anna Krachey and featured in “Close Encounters.”

Also of note are the items in MASS’s brilliantly realized offshoot to the exhibition, Close Encounters. A small space in the MASS office displays the books, objects, and other ephemera that influence the artists in the making of their work. Berger has on a display a book about Gordon Matta Clark, its center cut out in the spirit of Clark’s construction pieces. The exhibit highlights Krachey’s odd sense of humor with a variety of objects from fake rubber puke to a set of pastel-toned jewel earrings. Close Encounters allows the art works in the main gallery to resonate through the artist’s own research and findings. 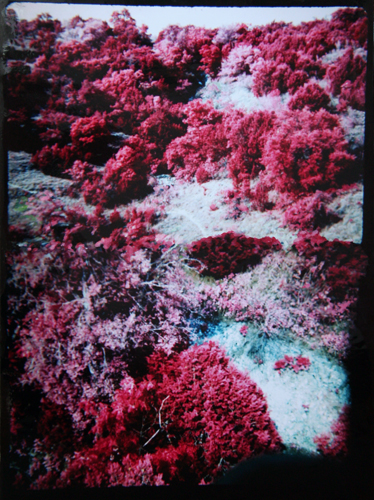 It’s strange that the curators of Surface Tension don’t include any painting in the show, as if they are denying the historical lineage of the argument between flatness and depth. Sonya Berg, currently exhibiting an impressive new body of work at Tiny Park Gallery, would have been an excellent addition to the MASS show. Previously, Berg used photography as source material, making paintings with lush blocks of green and blue to indicate, among other things, swimming pools. In this exhibition, Berg elides her process, creating photographic collages and suturing the cut lines with daubs of paint. The result is something between painting and photography. The works are so well constructed, it’s hard to tell where one medium begins and the other ends. It is, perhaps, this ambiguity of the material properties of the work of art where Surface Tension is lacking. More tension, less surface.