Infinite and Repeating: An Interview with Morgan Rush Jones

Morgan Rush Jones grew up in Ohio, moved to New York to study photography and then arrived in Austin two years ago to make work on his computer while exploring natural sites such as McKinney Falls and Enchanted Rock. He combines the worlds of nature and technology in his current show at Farewell Books in Austin. I met him at the gallery to discuss the exhibition. 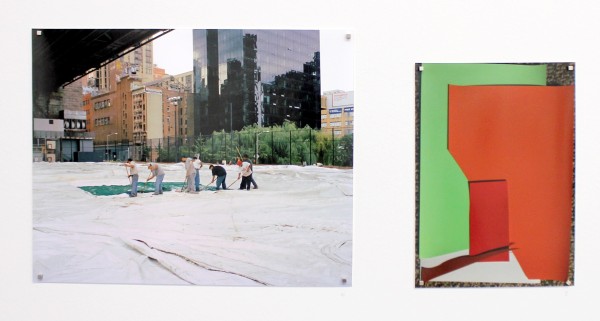 Katie Geha: Can you tell me a little bit about the show?

Morgan Rush Jones: This show is a collection of work I’ve been thinking about for about the last year and a half. It’s totally multimedia. It combines photography, some of it is text work, some of it is straight-out-of-the-computer work and some of it is video. I think the connecting thread is about structure and self-similarity, a mathematical concept that pops up in, say, a fractal drawing or in a photo that is showing the arterial structure of a highway. I’m thinking about nature and space and these self-similarity concepts.

KG: Can you explain those concepts some more?

MRJ: I’m thinking about interior and external things that resemble one another on different scales. I’m trying to break it down to the simplest, most obviously symbolic reference. This is an artery structure and this is a house structure, and see how they aren’t all that different? These forms are a way of seeing patterns expressing themselves in the mundane, in the environment.

MRJ: Yeah, certain forms. It’s more about how this location functions in the world then where it is specifically. For me, it’s a symbol of human structure, so that an artery can act in the same way that a fractal represents networks in the same way that a housing project is developed. Density. Which is why I’m interested in pattern-making in my art, like a blank abstracted typography, or something more specific like high density housing. I’m thinking about human scale in relationship to the super big and the super small.

KG: Is there a through line then, one specific principle that you’re trying to illustrate?

KG: I guess I mean the artery, the nature of it, are you seeking that out in the images you chose for the exhibit?

MRJ: That’s interesting but I think that there may not be a way to see a principle. I was recently reading a book about the design of cities and the author was saying that cities kind of just end up what they are, despite any kind of urban planning. It’s spontaneous flow or organic. I kind of think that there is no real single principle or idea I’m looking for, instead, I’m hoping to express how I see the organization in nature and how things naturally end up the way they do. 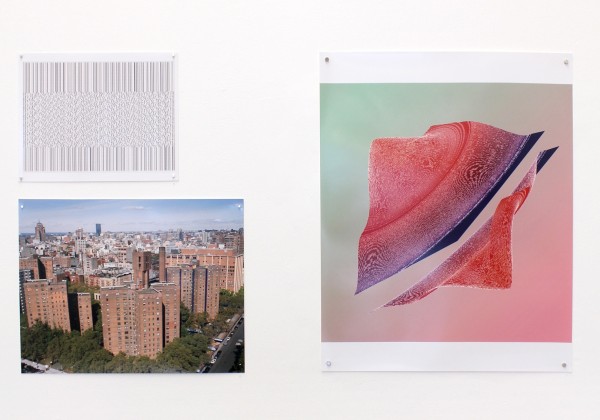 KG: Tell me about the title of the show, Index. I was thinking about different meanings of the word. For instance, these images could all be points of reference for something larger, or maybe since the work is so photography-heavy, you might be referencing the indexicality of the photograph. What index were you thinking of?

MRJ: That’s hard to say. I just thought with this type of work there wasn’t a bigger emotional meaning that I could assign to it so. . .I think it’s more of a catalog of some of the same principles that exist in each work.

KG: Why combine straight photographs with manipulated ones?

MRJ: This is a huge thing for me. There is such a fractured number of genres in art and I think you can have a more functioning set of ideas if you are using a lot of mediums together.

KG: You are you using a lot of different mediums but, save for the TV monitor, everything is super flat. We don’t even have the ledge of the frame jutting out to create any kind of dimensions. The images are flat against the wall.

MRJ: Yes. I think the physical object is just not that important in this case. I think it’s much more, for me, the image or the concept. I’m not interested in the photograph as a physical thing. It’s simply a means of display for content—the best detail possible in terms of printed mediums.

KG: And yet, while the objects themselves are really flat, some of the imagery feels very three-dimensional.

MRJ: 3D graphics are something I’ve become really interested in. So it’s close to being real and yet very photographic. Finding some edge of reality, where it’s not quite clear how the image originated. 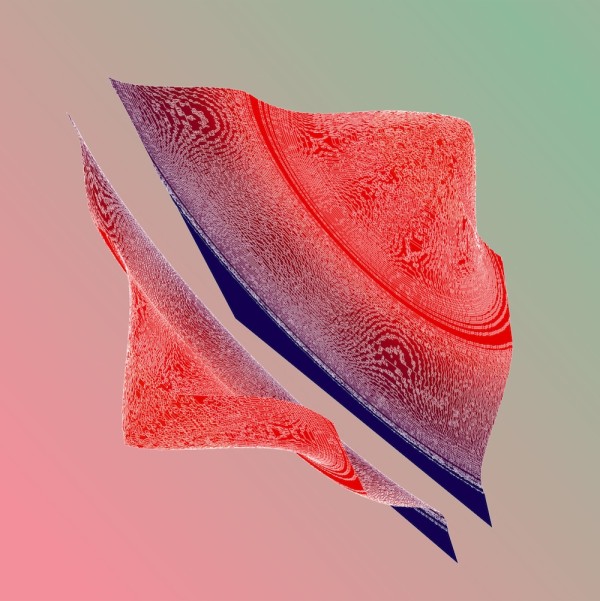 KG: Right, there’s the 3D element but I guess I’m thinking of the scrap works you’ve made, the photographs of these pieces of paper that somehow seem painterly and sculptural all at the same time. 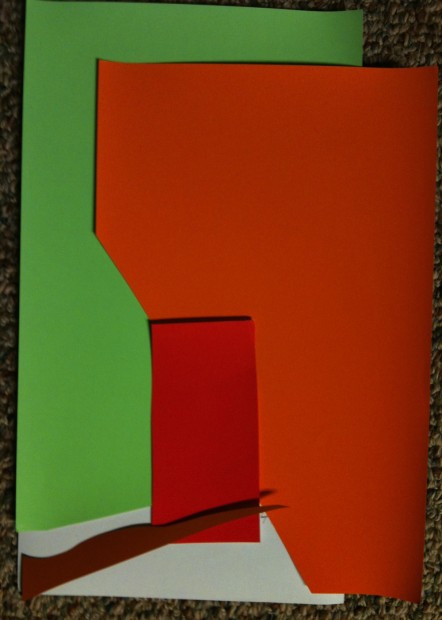 MRJ: I like these ones because they were just spontaneous little actions and only dependent on whatever scraps of paper I had, totally the opposite of some formalist structure. This is easy and I feel like that’s a good thing to make. It’s easy to make, think about and see. It doesn’t mean there’s less value in it, just that it’s easy, open to play.

KG: These images aren’t manipulated, so when do you know when to manipulate an image in the computer and when to leave it alone?

MRJ: I try to make it as much of a spontaneous process as possible. I just try to make something up until the point when it becomes interesting and then stop. I’ll get excited by a certain technique for a while, work through it for a while to see the results, but it’s different than just choosing effects to apply to a straight image.

KG: In your past work you’ve had lots of text. In this show you have text but it’s unreadable. How does text relate to your work? To self-similarities?

MRJ: Well in the past, text might act as poetic markers for the background imagery but in this case, it’s just about what happens if you overlay a text a billion times on top of itself. It doesn’t matter what the text is. There is some repeating nature in it, but what you see is just the structure of the text, a phrase’s structure creating a pattern rather than it being about taking the time to read it and figure out the meaning of the words combined. It’s funny to me with these pieces because people think the result is a magic eye picture, when it’s really about thinking about how text’s meaning is encoded in an image and finding a pattern to manipulate by changing the words, letters, phrases.

KG: There’s a catalog, a compendium to the show called Index of Raw Materials. How does the catalog function in the show?

MRJ: I made the book first and the idea was to create a collection of all this kind of work I had made—all mediums, all styles, 4×5 photography next to cell phone photographs next to video stills.

KG: Right, but there’s something about the catalog that feels very autobiographical, that I don’t necessarily see in this exhibition. Did you purposely try to make the show more detached or more neutral?

MRJ: Really? You think the book is more personal?

KG: Well. . .there’s pictures of past friends and lovers. Kind of more off-the-cuff images. . .there’s a nude photo of you, so yeah, it feels more close.

MRJ: Well I think everything is personal…even if you’re geeking out on mathematical concepts or architectural plans. There is a sense of humor in this stuff too!

MRJ: Part of that is just selecting images. Once you start picking works, it gets more formal, in a gallery especially. I still like the kind of wall-to-wall display like it’s the Internet. 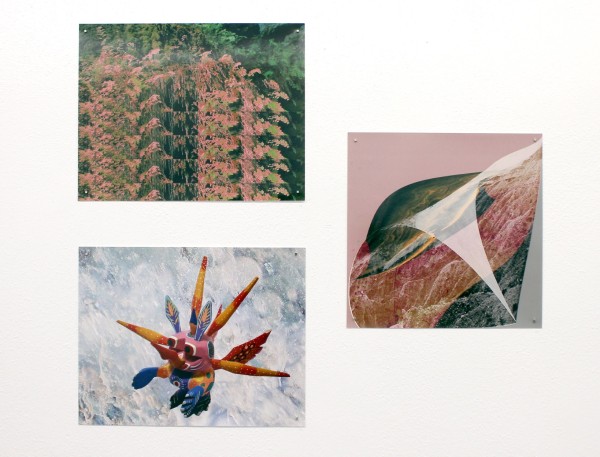 MRJ: I looked at everything I’ve done and for this show I teased out my favorites which on this tangent, at least, were the most developed and representative of this running theme of nature-meets-structure.

KG: You went to SVA and lived in New York for a long time.

MRJ: Yes, well I started studying photography and quickly started working on video, and computers, and web-based projects. I think the most relevant tool for art-making now is the computer, so it really blew up the way that straight photography or illustration or video work by itself exists in the world now. The convergence of mediums happened while I was in school, which I think is still filtering through the way art is presented and viewed right now. 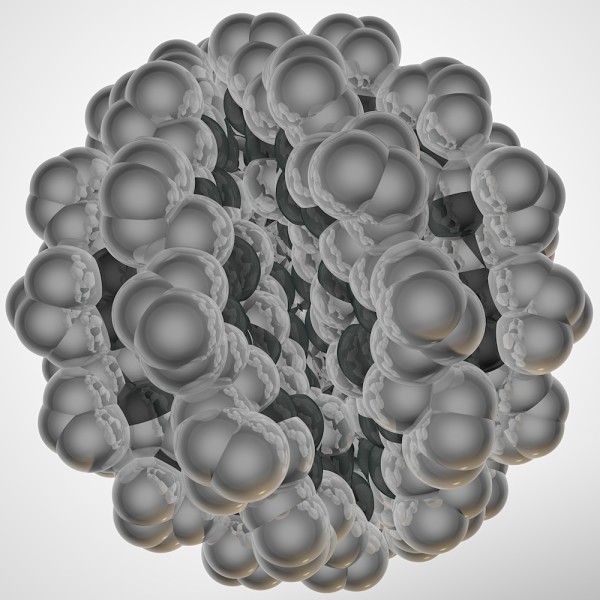 KG: And now you work primarily on the computer?

MRJ: Yes, it’s the main tool. It’s the editing base or the desk. I don’t see it as so separate a medium anymore, however.

KG: It seems then, that the form and the content of your work is directly related to computers, such as information or systems.

MRJ: Yeah, I think so. I started reading books about system design and ecology books and the failures of architecture and civic planning and how computers work with logic or rework reality. All of that stuff gets filtered into what I go out and look for when I take pictures. So it’s never something like, “this is my friend Dan standing there which is identifiable.” No, it would be much more like, “this is a typical American intersection and here is a housing project,” and I hope it provokes a sense of wonder as to how and why that structure exists in the first place. And so that work is hung next to a 3D rendering of a molecular building block-like structure. I hope then, that the viewer might connect the two, that these structures are infinite and repeating. Thinking about it on all the scales at the same time, as if through the abstraction we see here is a rule which is manifesting itself in how our environment looks.

KG: There’s a lot of silly Internet art out there. Lots of jokey gif-inspired images. Your work feels more serious.

MRJ: That’s hard to say. There is a lot of jokey Internet art, yes that’s for sure. For me, reality is just more serious than that, than making art that’s just a joke in and of itself.

KG: Why did you leave New York?

MRJ: I wanted to try living somewhere else for awhile. I was worried about becoming a jaded New Yorker and I wasn’t sure I liked that. I wanted to be somewhere that has more air and space and trees. There’s a certain cynicism in the culture there I never agreed with.

KG: Did you see New York and Austin as maybe on opposite poles between the natural and the built environment that you so often refer to in your work? 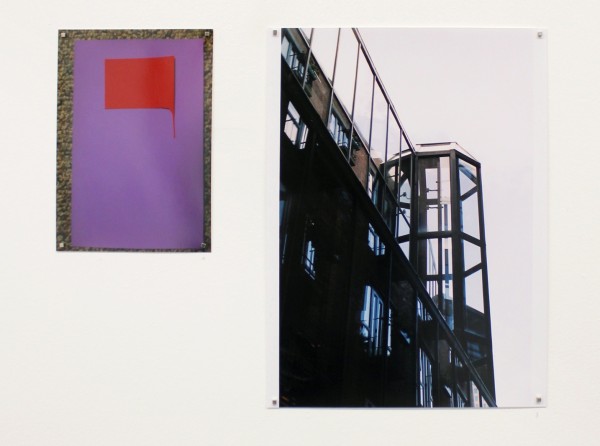 KG: That is a salient point, since it seems your work is trying to sort of approach some universal complicated things—systems and entropy and information. You make electronic music under the moniker “Paradise.” Why electronic music?

MRJ: I’ve always been interested in the most-up-to-date tools. Like a kind of futurist perspective. I have no major nostalgia for the past. I want the present to be the most coherent, up-to-date rational present as possible. The future should be more rational and adapted.

Morgan Rush Jones: Index is on view at Farewell Books, Austin through March 23. More of his project, Index of Raw Materials, is viewable online.