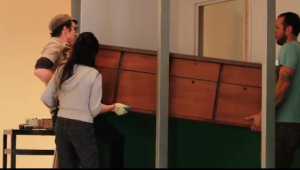 “This is the first time that we have tried to make a building that is an artwork,” says Mihalyo.

“I hope that people can come in and spend enough time to find something that is uniquely meaningful to them,” adds Han.

Lead Pencil Studio, formed by Han and Mihalyo in 1997, is prominent among a growing number of firms approaching site-specific art installations, especially public art, using the methods and aesthetic of architecture. Diffuse Reflection Lab is supported in part by art patron Suzanne Deal Booth, who is apparently specializing in artistic constructions combining architecture and light at Texas universities: She was a driving force behind Twilight Epiphany, James Turrell’s music pavillion/transcendant skyspace at Rice University in Houston, unveiled last year.

That boy Scott Proctor gettin his build on