“It is hoped and anticipated that this simple act of driving through different parts of the city will bring about a greater awareness to the challenges facing Houstonians and initiate an educational process that will contribute to the humanization of Houston. This is the reason for and the goal of The Human Tour.”

Michael Galbreth (of The Art Guys) launched The Human Tour in 1987, an ambitious project to activate Houstonians to experience parts of our city that we may not encounter in our daily lives, and to foster dialogue about challenges such as transportation and housing. Houston artists Carrie Schneider and Alex Tu have revived and re-imagined the Tour as a series of walks, further humanizing the route by creating guided, group participatory experiences .

I attended the kick-off brunch at Natachees restaurant in Midtown Houston on February 10. The artists chatted with walk participants about the project, handed out maps and answered questions from curious restaurant guests and staff about the history and evolution of The Human Tour. The artists, participants and interested parties ate together at a long table, already establishing a close rapport over comfort food that would continue during the morning walk. Schneider and Tu were dressed in their explorer gear, and it was a real treat to discuss the evolution of the project with Galbreth. 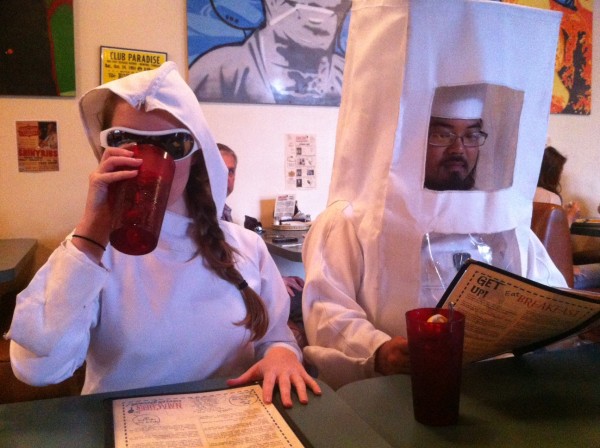 In 1987, Galbreth layered a graphic of a male figure over a map of Houston, outlining a route that participants could drive along, thus creating an experiential drawing, An Anthropomorphic Route Through the City of Houston. Schneider and Tu had screenprinted the upcoming walk schedule onto the original maps from the 1987 project. The original map text includes histories of Houston neighborhoods that were part of the route, such as The Near North Side, First and Sixth Wards, Fourth Ward, Midtown, Third Ward and Navigation, with additional research and commentary from Galbreth and excerpts from a City of Houston Department of Planning and Development neighborhood grant-aid study.

After brunch we embarked on the first scheduled walk, which took us on a 3.7-mile route along Main Street, down to Austin and Wichita (where the last remaining plaque from the original Human Tour is located) and back up through Midtown. 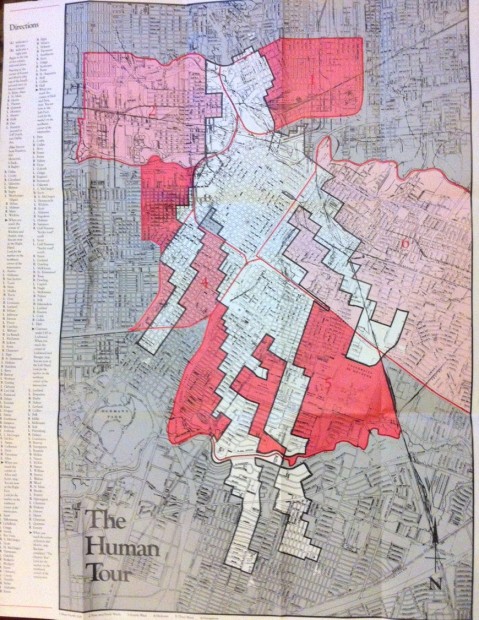 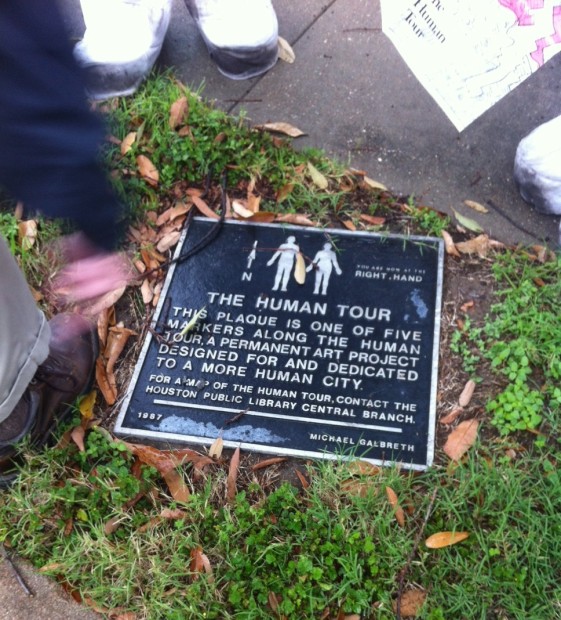 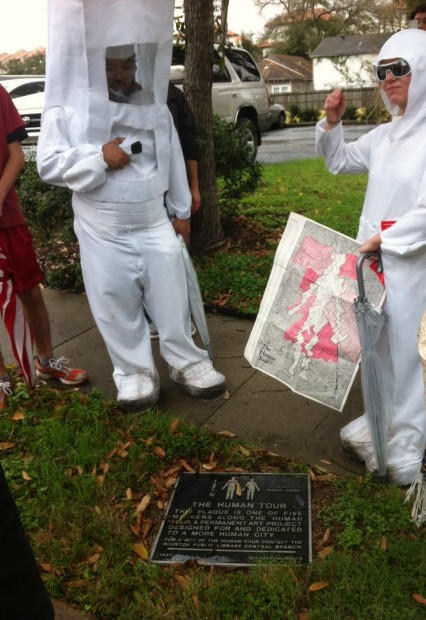 “From point a to point b, you walk, you discover meaning in details you never noticed, in in-between spaces you wouldn’t have sought to arrive at, and see even the familiar in a new light.”

My morning and evening commutes are by car, alone, sitting in congested rush hour traffic routes, to and from garages and parking towers. During previous years, my commute into downtown crossed segments of the same route that we walked as a group that morning. This time, on foot, my senses were engaged by the sounds and smells of the street, and by conversations with fellow Human Tour participants and random walkers. We noted the grassy lots being redeveloped into multifamily/mixed-use properties, the changing nature of “Midtown”, the disappearance of landmarks and the shifting architectural styles visible in the newest townhomes. My favorite bánh mì restaurant relocated close to the University of Houston about six years ago, and the building it had occupied along with other Vietnamese shops still sat vacant. Everywhere, signs of impermanence and fluidity.

As we walked through the rainy streets, guided by our maps and the artists in their muddied white suits, I wondered how we appeared to onlookers. A group of people leisurely walking in Houston for any reason will garner attention, and I imagined that our crew, diverse in age and background, would attract some interesting exchanges. We definitely appeared as light-hearted tourists, snapping photos, posing with street art and flyers and excitedly staring into the window panes at the Downtown YMCA, the arrestingly tranquil Church of Christ, Scientist building and the old Midtown Houston Fire Station. Most of the public interaction that day consisted of smiles, fleeting conversation and curious looks and stares at Schneider and Tu’s futuristic appearance. The streets were quiet and the misty weather made for a chilly, yet comfortable stroll. There is vulnerability in walking through the city, as you are forced to engage with the public (space) in ways that are random, immediate and avoided by locking ourselves in the confines of our individual vehicles. Reflecting on the morning’s walk, one of Galbreth’s predictions becomes especially poetic: “…communication (from the Latin ‘a shared space’) will replace transportation.” Our walk was filled with just that: communication, shared discovery and observations and unplanned exchanges—sparks of humanization.

The final walk on  is on Sunday, March 10, leaving promptly at 5 p.m. from Shearn & Hickory Streets and arriving around 7 p.m. at 3617 Main Street for a “grand finish line video screening & suit ceremony” and the arrival party at Natachee’s, just across the street.

Visit Hear Our Houston – The Human Tour for a schedule of walks and information on the concluding events of the tour.

For more on the original Human Tour, I recommend this post by Robert Boyd.