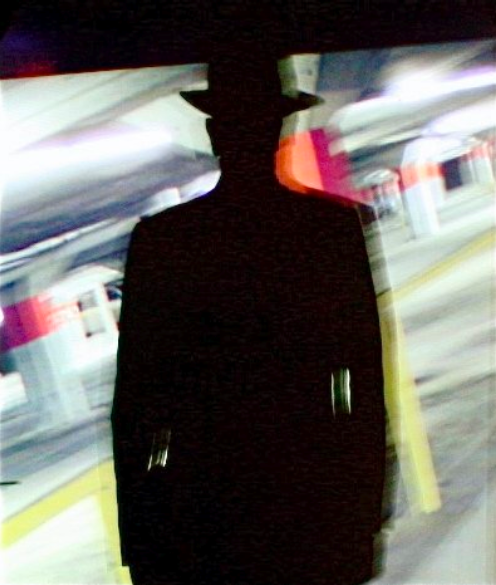 I recently had the chance to get into the studio of artist and friend Michael Anthony García. Our conversation about his most recent work for People’s Gallery at the City Hall in Austin led to a great chat about his transition from performance to object based work, and how his work really is more about language.

LMC: When we ﬁrst met back in 2000-whatever, you were doing more performance art. Over the years I’ve seen you move back into sculpture and 3D work. What changed? Why did you start working with tactile objects again? Explain a little about the process of moving from performance to making objects?

MAG: There’s always an overarching sense of duality in most aspects of my life and in that vein, I have always had a foot in both traditional ideas of 3D/ installation and performance in some form or another, be it work that I eventually create or just hides away in my head, sketchbook or studio.

Since childhood, I’ve comfortably explored both realms through play, but didn’t think of it in an artistic sense. I didn’t even realize I had been making art until I took an art class on a whim my freshman year at Austin College, in Sherman, TX. At ﬁrst I delved really deeply into the 3D niche as my mentor and professor there, artist Mark Monroe, opened my eyes to sculpture and installation. As time went on though, I became more intrigued by performance as a medium and started dabbling in it. I felt a bit trepidatious about that work at ﬁrst, but over the years it came to me much more naturally, especially in the years when I didn’t have a dedicated studio space or the tools to make other work. Now, my impulsive nature facilitates going back and forth. 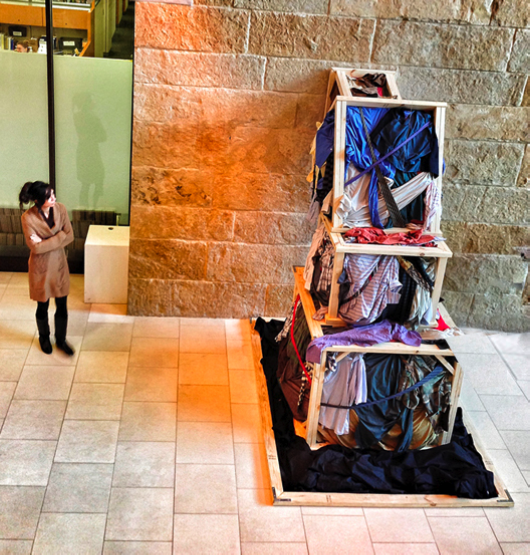 Lately, the ideas I ﬁnd I want to work with have mostly been within the realm of sculpture/installation, but I have several performance ideas brewing in the back of my sketchbook as well. They’re just not fully formed as of yet. With “Exo X O” one of the pieces I have on display at Austin City Hall for the “People’s Gallery” exhibition, the performative act of it’s construction (which I documented on Facebook, Twitter and Tumblr) is referenced in it’s name and concept. That piece is about building an exoskeleton to protect the profound anthropomorphic relationships we establish with the objects in our lives. The wooden structure created to protect the clothes, 1 “…barely contains the overwhelming mass of the memories, relationships and whims that the individual articles themselves contain. It’s a doomed love affair built on material world ideals with unbound potential energy literally busting at the seams. The inevitable romantic end is signed XOXO.” 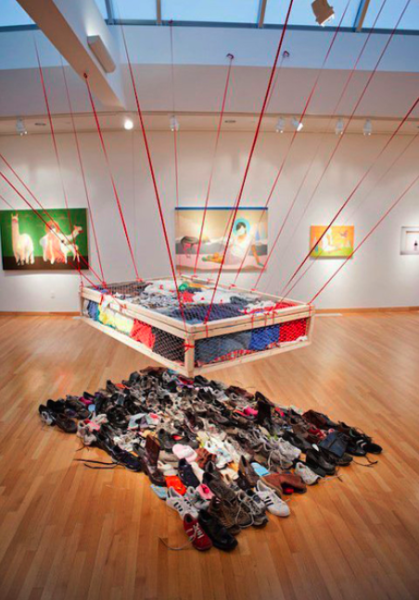 LMC: Why Clothing?
MAG: Clothing is a material that I use in performance and sculpture/installation because it references the physical body and because of all the connotations it has and connections we have to it. We have preconceived notions about individual articles of clothing and what it means to wear them and use them to convey ideas and express ourselves. They can deﬁne who we are, who we want people to think we are, or we make assumptions about other people based on them. It’s like RuPaul said, “We’re born naked, the rest is drag.” And on the most simplistic level, everyone has a favorite shirt or lucky underwear. I am even interested in these relationships and what they say about us, like how someone can have a deeper connection to an inanimate object than they do to an estranged relative they haven’t talked to in years, etc.

In a performance titled “These Are Not My Memories” that I created as my father was dealing with the ﬁnal stages of cancer, I used his brown fedora. In that piece, I used it in conjunction with old silent home movies on 8mm reels from before I was born. I performed with the hat and these images that I’d seen many times over the years and know like the back of my hand, even though I wasn’t even born when they were made. My father’s hat transcended those memories into a real experience that I could touch, hold and wear. It’s more than an object. To this day, I still wear it to think of him. 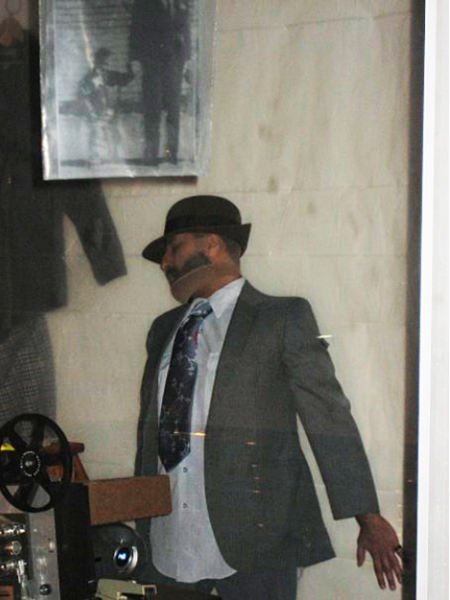 These Are Not My Memories, image courtesy the artist

LMC: You mentioned that you really think about your work as a language and a translation, can you talk more about this?

MAG: I see working in sculpture, performance, drawing, or any other medium as speaking in different languages. Some languages are more succinct for expressing certain things. I personally relate it to those moments when I am conversing with someone and the best way to say something, even if just a phrase, is in Spanish, but other times English gets the job done better. Many times, there are only words or expressions in one of the languages that will work because there is no literal translation in another.  Art as language to express ones self is a deeply personal thing. It can be used to express beauty, be it traditional or not, or to say something that words just can’t accomplish. The question I unconsciously ask though, is which language do I use to say it? I have had moments of trying to say something with one medium and it not sounding right at all. It’s a failure of communication, but as a teacher, I know that’s OK. It’s part of the learning process.

I often use performance as self-dialog, to help me get to the root of ideas, problems or situations I cannot penetrate otherwise.  It’s like therapy and it’s personal in that I use my body as a sculptural medium. I am a player within an installation, and it’s about self-reﬂection. Audience is secondary, unless it’s interactive and their participation facilitates the dialog. Strangely enough with it being  the most direct connection to an audience, for me it’s one of the more personal and my go to for opening up my vulnerabilities. In “Demasiado Profundo”, I built a giant shadowbox that I stood inside while different locations were projected around my silhouette. It was equipped with a video camera on top connected to a monitor inside where I could see the audience around me as I interacted with them. All they could see of me though, was my silhouette. My responses to their queries were picked up and ampliﬁed using the microphone and speakers suspended above me. As the piece was about confronting and challenging my social phobias and shyness, it created a scenario in which I was on the spot and forced to interact with everyone around me. To up the ante, I grew more and more vulnerable by slowly disrobing during the conversation so that by the end, I was speaking with the room full of people without a stitch of clothing on. 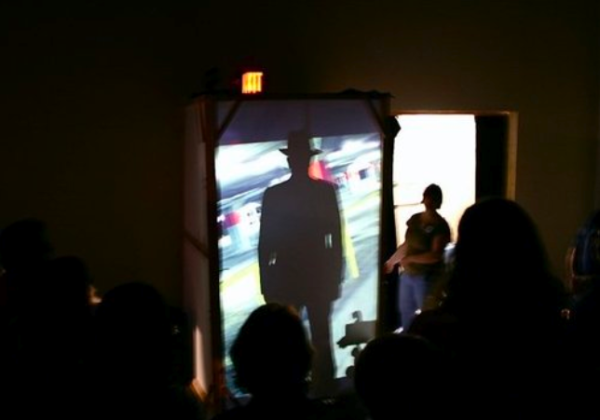 To this day, I credit that performance with pushing me past that previous obstacle to be a more open person in real world social settings. Creating tactile objects, on the other hand, is by it’s nature a very concrete and and real experience. I have to transform sinuous thoughts into actual things that are to be experienced with various senses. With “Pila” a sculptural piece I made with sheer white curtains, ﬂuorescent light ﬁxture and hanging shirts, I wanted to conjure a real-world representation of the energy source or “battery” that we draw our essence from. With installation, I feel like a pagan establishing a sacred space. It’s a safe area all around me where I can be in control of all the elements, and if it’s site speciﬁc, I bring architecture into the conversation. When It comes to the media I use, it boils down to what do I want to say, how do I want to say it, and who’s involved in the conversation. 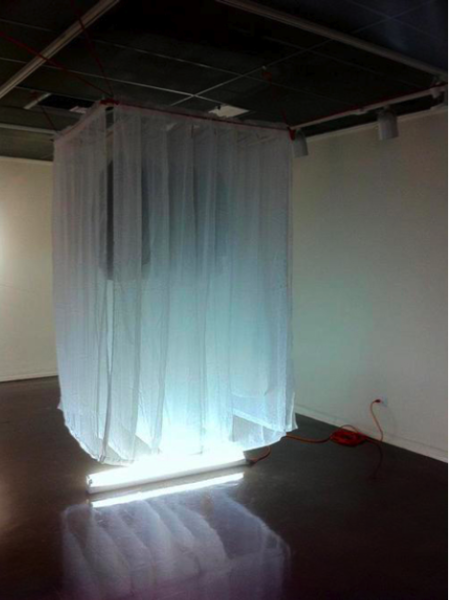 We the People: Austin Seeks Artists for 10th...

I miss you greatly as a team lead and teammate at Winn….

Meanwhile, I reading again, about you. I have enjoyed reading about your work. Mainly, how your art transcends across cultures.

Knowing you are from El Paso, I must ask ( please forgive me). Do you deliberately inject your culture into your art? Your work’s title are telling of your proud heritage.

I wanted to drop in your Name as a possible performer for an upcoming Hispanic festivity. I am serving as a member of this committee. We serve a very Eccentric, eclectic, affluent and diverse population .

What are your feelings about this? You know this would be a all for the public good and no money to be given