Years ago, an artist and I were discussing humor as a device in art. I expressed the opinion that, while there seemed to be a wide-spread acceptance of humor when black artists employed it as a tool for exploring issues such as slavery and racism, the thought of Jewish artists using humor to explore the Holocaust would be deemed unthinkable, and that there would be a massive outcry denouncing such a gesture. (My position was not so much that humor should not be used on weighty subjects, but that it seemed more acceptable in relation to issues relating to the African diaspora, and I was skeptical of this.) I was told of Zbigniew Libera, an artist who used Lego to create miniature replicas of concentration camps in 1996, and that they were in fact, quite controversial at the time. 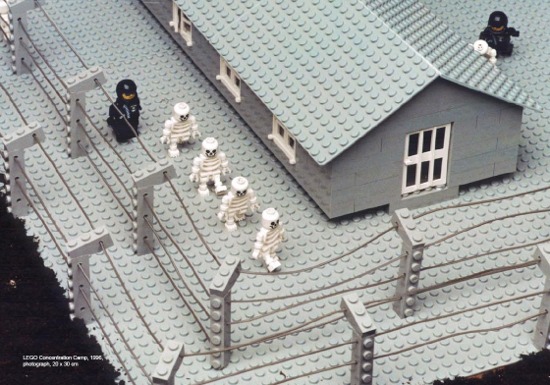 I shared with Libera’s many critics a belief that the use of toys to represent unspeakable occurrences such as slavery or the Holocaust trivialized these events. This conversation came to mind when I learned that Phillip Pyle would be installing a Lego reconstruction of a slavery plantation based on South Carolina’s Waverly Place Plantation at the Houston Museum of African American Culture. 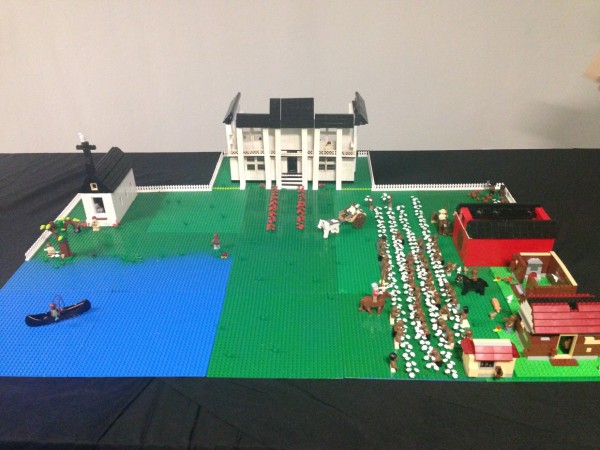 Caroline Plantation  rests atop a table in the front gallery of HMAAC. The sculpture features a “big house”, sprawling grounds that include a cotton field (with daisies standing in for cotton plants) and a tree with a swing hanging from it. Black and white Lego minifigures populate the construction. The color of the figures and their placement within the tableau conveys the social hierarchies of the slave era: black figures outnumber white ones, and occupy positions of labor and servitude – they are bent before the cotton plants, and stand behind the white figures. Though the artist may have intended to “give light to an old topic using a modern medium” what this part of the installation does is to mitigate the horrors of slavery. We are not presented with the horrific conditions to which enslaved Africans were subjected. Neither the overseer’s whip, other forms of physical abuse, maiming, crowded and inhospitable living conditions nor the ongoing degradation and terror are shown. The swing carried, for me, the association of lynching and I was surprised there was no  allusion to the violence that was rife during this time. (Interestingly enough, a Lego depiction of a slave plantation from 2009 that I unknowingly came across on a white supremacist site when Googling Libera did depict slaves being whipped and hanged).  Perhaps the artist did not wish to perpetuate the association between blackness and oppression, however the depiction of slavery using Lego serves to sanitize the endeavor. Difficult as it may be to confront I don’t believe that the abject nature of slavery should be assuaged. 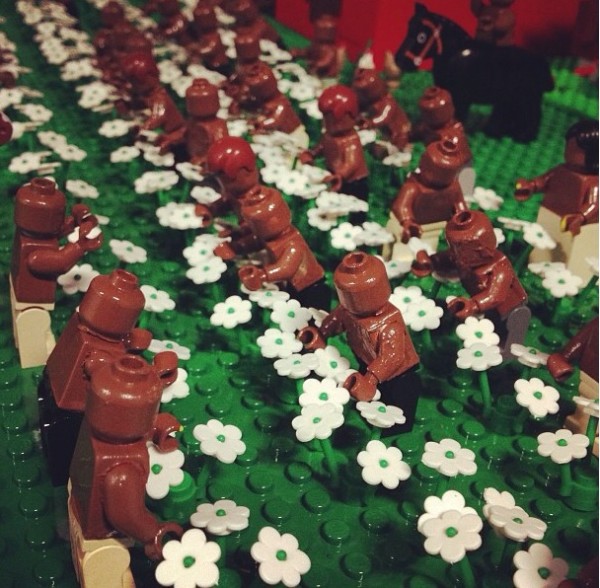 Accompanying Pyle’s Lego sculpture is a wall projection titled Slave Facebook and an audio piece, by Robert Pruitt, of actual slave narratives that are accessed by lifting the receiver of a wall-mounted rotary phone.

Slave Facebook imagines the current social media tool as though it were operating during the times of slavery, featuring updates and postings from slaves, freed slaves, abolitionists and slave owners. Slave Facebook purports to provide “an experience of what it was like for slaves to use social media in their day.” This statement is confusing, as spirituals and quilts were two of the forms of “social media” that enslaved Africans used to articulate their experiences and the conditions of slavery, along with letters and the writings of freed slaves and abolitionists. Engaging with these already provides some insight into the ways in which enslaved Africans communicated. Even if one overlooks the impossibility of having Facebook during the era of slavery, it’s not as though those who were enslaved would have the time to post updates. Similarly, the slave narratives could have been accessed via headphones attached to some sort of audio player instead of a piece of technology from the 1980s. However, the two pieces do personalize the experience of slavery in a way that the model fails to. Pairing them with the model provides a more complete depiction of the slave era.

Inserting present-day technology into a historical narrative may be an attempt on the artist’s part to shift how we engage a painful and burdensome history.  Yet this engagement comments more on methods that can be used to access and present the past in museums than to shed light on the actual history (i.e. slavery) in question. The incongruity between slavery and contemporary technology in Caroline Plantation highlights the absurdity of the pairing rather providing insight into the ways in which this troubling history is presented and consumed. Incorporating Facebook in Caroline Plantation doesn’t really open up the ways in which we can engage with slavery, it simply places familiar historical content into a new format.

Sally Frater is a curator and writer based in Houston. She is currently a fellow in the Critical Studies Program at the Glassell School at the Museum of Fine Arts and the Artist-in-residence at Project Row Houses.

Hurry! Phillip Pyle’s Caroline Plantation is on view at the Houston Museum of African American Culture through February  26.

Thank you so much for writing this. Being a Black artist I often fear that Black artists in Houston are immune to criticism. This work is unoriginal and a lazy attempt to deal with issues surrounding slavery. I took away nothing from this piece when I saw it and was very disappointed to say the least. I too came across a Lego Slave plantation while I was randomly goggling.

Immune to criticism? Who you been hanging with youngblood?

First lets begin by adding an “L” to my first name. Thanks for the review Sally, but the “rotary phone” piece is not a part of my exhibition. Also last time I checked I did not build a swing on the tree. Hey, Sally shoot me an email.

Sorry- I should have caught the misspelling. Those tiny, l’s and i’s in Arial are too close together. It’s fixed now.

Thanks Bill, and thanks Sally for the review!

Immune to criticism? Many local Black voices in Houston have to ignore much of the criticism that is aimed towards them, because its so out of touch. That is called self preservation.

My son is a lego junkie and needs to do a project for school for Black History Month. I think this would be great for him. Where do I find the minifigures you show?

I created all the mini figures from the usual Lego pieces. Send me an email if you have any other questions, [email protected]