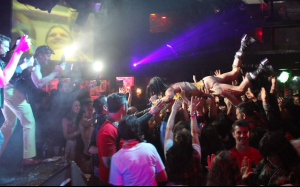 Another night at Numbers

In case you’re curious, Otis Ike has posted a photo album of theotis Ike/ Joanna’s recent Mardi Gras at Numbers with Christeene on his website. Sweat, booze, and various slimy substances, all illuminated in unflattering camera flashes. The email announcing the show-and-tell album proclaimed, “Mardi Gras at Numbers is now a Non For Profit Organization and we will work year round to steal Mardi Gras from Galveston.  Look for our Mardi Gras educational programming to be announced.  Instructor Brian Rod will help students overcome their fear of being photographed in their underwear.”