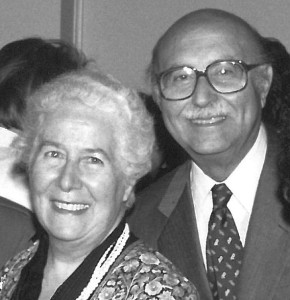 On Friday, the Rothko Chapel announced that Nabila Drooby, one of the longest serving members on its Board of Directors, had passed away on Saturday, February 9, 2013 in Beirut, Lebanon. Drooby was on the Rothko Chapel Board from 1972 until 2003, and served as Executive Director of the Rothko Chapel from 1990 to 1997.

In 1972 Drooby traveled with Rothko Chapel founders John and Dominique de Menil to Egypt, Iran, and India, visiting different religious communities to promote the vision of the Rothko Chapel. She worked closely with Dominique de Menil to help shape memorable events including the first colloquium on “Traditional Modes of Contemplation and Action in World Religions,” the first visit of the Whirling Dervishes, the Royal Dancers and Musicians of Bhutan, and the fourth colloquium on “Islam: Spiritual Message and Quest for Justice.”

As director, Drooby was involved with  some of the Chapel’s most important human rights programs. For the tenth anniversary of Archbishop Oscar Romero’s assassination, Dominique de Menil and Nabila Drooby led a delegation from the Rothko Chapel Board to San Salvador to participate in services and marches.  Flanked by Dominique and Nabila, Francesco Pellizzi announced on local television networks the chosen Salvadorian recipients of the 1990 Oscar Romero Award. In 1991, they brought Nelson Mandela to Houston for the Human Rights Awards, and the Oscar Romero Award in 1993 was presented in Vienna to coincide with the United Nations’ World Conference on Human Rights. The Carter-Menil Human Rights Prize in 1994 was awarded in Oslo to the Norwegians in their efforts for peace negotiations between the Israelis and Palestinians.

A memorial service at the Rothko Chapel will be announced at a later date when Nabila’s children return to the United States.