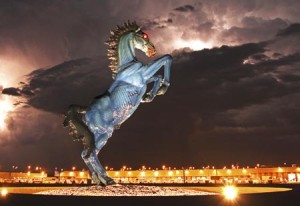 Mustang, Luis Jiménez’s last work, aka the Big Blue Horse at the Denver Airport was reconsidered on Monday. Maybe it’s the glowing red eyes, or the prominent penis, but some like it, some don’t. The local CBS station reports that the 32-foot fiberglass monument cost the city $600,000 (an earlier news story says $300,000!?), but could be worth as much as $2 million, fueling a notion to sell off the controversial artwork, which has been greeting visitors to Denver since 2008, when it was finished by Jiménez’s son, after the sculptor was killed in a studio accident during the piece’s fabrication.

The 5 year city contract for the piece expired last weekend, and The Denver Commission on Cultural Affairs debated the issue Monday, but despite outcry over the piece, there were reportedly no petitions for its removal.

Luis Jiménez’s Man on Fire: From the Olmec...

There may be no petitions, but that doesn’t mean that this statue (and indeed all the art at the Denver International Airport) isn’t SATANIC! (http://www.youtube.com/watch?v=LOQsvOkkLq4&feature=player_embedded)

One of the best sculptures in Denver or anywhere in the nation. Keep the piece, screw the outcry.

He knew the response it would get. It may currently be appraised at 2 million, but they (DIA) would be well advised to hold onto that piece.