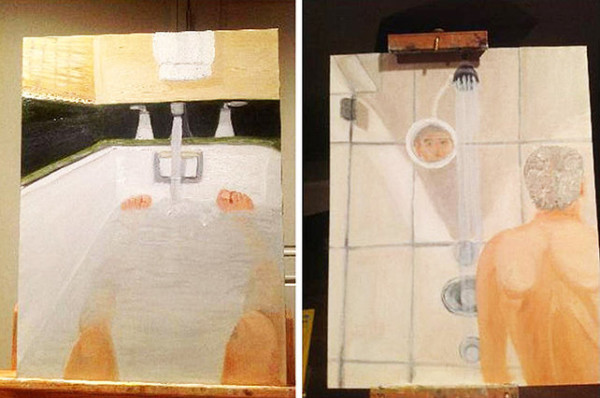 As a result of a recent hacker attack on the Bush family, photographs of three paintings by former President George W. have gone viral on the Internet. The National journal has collected some of instant the analyses from critics looking for themes of absolution in Bush’s two self portraits, bathing:

“A Freudian will have to tell us why the water is running in both pictures. Private baptism; trying to get clean; infantile ecstasies; purification rituals?” writes –Jerry Saltz, Vulture.com.

“Even in the quiet inner sanctum of the bathroom, where a man is just a man, George W. Bush cannot escape his past,” –Clare Malone,  The American Prospect.

“Bush, slightly hunched, is standing out of the water, staring off into the corner of the shower, as if contemplating past sins that can never be washed away, no matter how much soap you use and how hard you scrub,” – Dan Amira,  New York Magazine.

“If you ask me there is something of a simple allegory to the moments chosen here: the discredited former leader trying to wash himself clean of the long failure that was his life,” writes -Miles Klee, blackbookmag.com.

“Perhaps, he is trying to cleanse himself in a more metaphorical way, seeking a kind of redemption from his less fortuitous decisions as president,” -Roberta Smith, NY Times.

The third painting, of Bush seated at an easel working on a landscape, has attracted far less commentary.