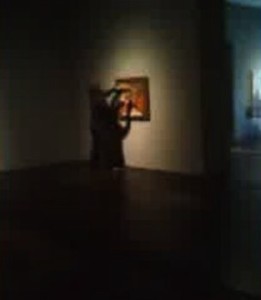 Uriel Landeros, the artist accused of defacing Picasso’s Woman in a Red Armchair at the Menil Collection, appeared in court today in Houston. Landeros was transferred from Hidalgo County Sunday, after turning himself in at the US/Mexico border. He is charged with criminal mischief and felony graffiti, both third-degree felonies. A Harris County Judge set Landeros’ bond at $500,000, or $250,000 per charge. If convicted Landeros could face 2-10 years in prison for each charge. Landeros’ attorney, Emily Detoto, said that he plans to plead not guilty.

The Menil reports that the painting has been successfully repaired and will be back on view later this year.