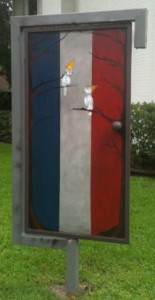 The Texan French Alliance for the Arts, the well-intentioned and well-connected nonprofit that scattered Bernar Venet’s rusty steel curlicues across Hermann Park in 2009-2010, is at it again: TFAA and its partners have begun Open The Door, an “intercultural public art project” developed by TFAA’s executive director, Karine Parker-Lemoyne, and Romain Froquet, an artist of the Paris-based art collective, 9th Concept. Beginning Spring 2013, the project aims to place 60 swinging, painted steel panels, termed “doors” at 13 locations around Houston. 30 of the panels will be painted by pairs of by professional artists, half from Texas and half from France, the rest by art students, faculty and kids at local educational institutions including Rice University, The Awty International School, HSPVA, and Lone Star College. Houston artists involved in the project include Patrik Medrano, Gonzo 247, Lovie Olivia, Tierney Malone, Rahul Mitra, and Daniel Anguilu.

At a pre-launch reception on November 11, Parker-Lemoyne and Froquet introduced the project at the Baker-Ripley Neighborhood Center, with a collaborative event in which kids from the Gulfton Promise School helped the visiting French artist paint a “door” that had been installed at the center. On November 13, another prototype, painted by Houston Artist Rahul Mitra, was placed at the Julia Ideson Library, with reception attended by some of project’s many corporate sponsors, socialite Lynn Wyatt, and the French Ambassador to the US, François Delattre, who flew in from Washington D.C. to address the group, neatly verbalizing the banality of the concept: “The project is based on the powerful symbol of the door. The door is a natural passageway, an opening, an invitation to discover new territories. A door is not a simple hole in space. It has 2 sides, bound to each other. It represents the link between 2 cultures, 2 aspects of our world and it must reflect this duality.” 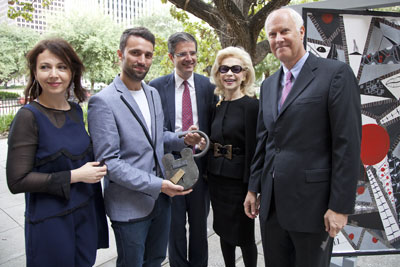 Hope they come up with a door as exciting as the one in Blazing Saddles. Won’t require much paint. Coin operated, they could recover their costs.

Houston has enough doors already (almost all of them locked, I might add, earnestly). But it only has one Lynn Wyatt. Why not station her at different points around the city?

This is why Houston society people should do what they do best: stick with the luncheons and galas and stop trying to curate.