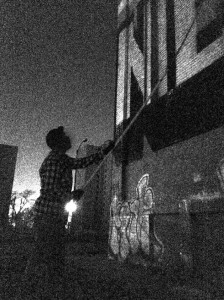 Sean ??, aka NEKST has died. A noted graffiti writer since 1996, he began writing as Next in Houston, and was voted “best graffiti writer” in 2003, by the Houston Press, even as they suggested he move to escape relentless police pressure. He did a stint in Austin; Rachel Koper of Austin’s Women and Their Work Gallery had this remembrance: “He was memorable, determined, a real force, a social insomniac, tenacious, loyal and persistent. It’s sad he died so young.  It breaks my heart . . . I kicked him out of Gallery Lombardi several times in 2003!! He kept coming back anyway. The Kid was tenacious.” He was was active in New York as part of the MSK crew (Mad Society Kings) before his death. Juxtapoz magazine has this hundred-pic tribute to the hardworking artist, well-known for his widespread, large-scale works.

Everything AND the Kitchen Sink: Historic Houston Opens...