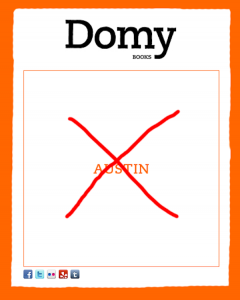 After seven years as epicenter of alterna-zine culture in Austin, Domy books is closing.  Houston businessman Dan Fergus, who owns Domy’s two locations has “withdrawn financial support” for the much-loved but presumably unprofitable store, which has been seeking alternative revenue by subletting sections of its gallery space to sub-retailers. Store manager/curator Russell Etchen is leaving, but the enterprise will continue under new ownership as Farewell Books; current Domy empolyees Travis Kent and Mikaylah Bowman are taking over on February 1, 2013. According to Alan Brenner of the Austin Chronicle, “they’re a bit nervous; they’re a bit excited; they’re ready to make this new thing succeed.”