Austin hosted its second International Film Festival Summit December 3 – 5, bringing together film and music festival organizers and industry folks from coast to coast. Staff from Sundance, The Academy of Motion Picture Arts and Sciences and distributors like Warner Brothers rubbed shoulders with directors and programmers of small to large-sized festivals, cross-pollinating and addressing the challenges of organizing independent events while dealing with the heavy pillars of the industry. It’s a lightning-fast couple of days that are motivating and sometimes frustrating. IFFS has a bit of a reputation—namely that a conference for event organizers could be so unorganized. This has been getting better in many respects (this is my fourth year to attend) and not so much in others.

At least there was a Christmas tree.

Just to give an example without getting too fussy, take a look at the panorama of this breakout room, one of two breakout rooms where afternoon panel discussions took place. You might notice a couple of things, like 1) Where is the panel? 2) Why is there so much unused space on the left side of the room? 3) Why is it so hot in here?

The panel of six (six people for a 45 minute panel… eek! We have 20 minutes left after they’ve all introduced themselves) is tucked away in the far right corner. The screen, placed in the middle of the room, never had anything on it beyond the names of the panelists, making it a useless prop. I know what most of the people were thinking as their necks became painfully cocked to the right for nearly an hour as the room temperature rose. Either the event staff thought this would be 1) a fun endurance test/joke to play on a room full of people who organize these things all the time 2) they simply didn’t know any better or 3) they didn’t care. Any of which is simply ridiculous. Things of this nature continue to occur at this conference, but have ironically become part of the fun of showing up.

So why do we keep going? Well, some of it is just plain exciting. Ted Hope, the new director of the San Francisco Film Society, opened the conference saying that film festivals can help recharge an industry that has grown outdated, teetering at the brink of irrelevance. Hope, himself a director, runs a blog that regularly follows the trends and turbulence of the independent film world. Also interesting was the panel of staff from the Academy (the first time such a panel has occurred, it was claimed) which enumerated ways in which the Academy interfaces with film festivals, filmmakers, archiving and collecting films, etc. It gave an air of collaboration that seemed to live under the bleachers of the blinding-gold game of Oscar. 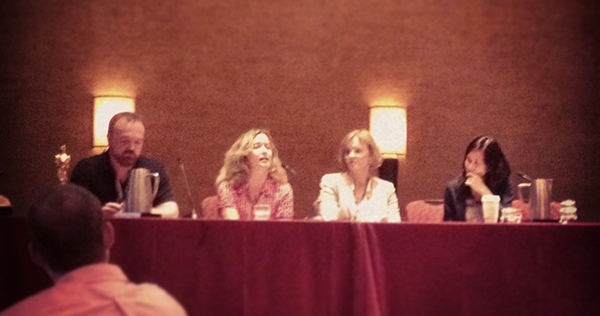 Staff from The Academy sit on the panel “Beyond the Oscars” (notice the little Oscar growing out of that guy’s head in the lower-left corner).

Among other talks was a very informative panel on DCP (Digital Cinema Projection), the system of disseminating and playing mostly big-ticket film titles for commercial theaters (replacing the film projector), which uses encryption technology worthy of the National Security Agency. Beyond discussing what a general pain in the ass it is for festivals, new solutions in development were presented along with ideas about what festivals should do in the meantime. Tim League, probably the smartest and most versatile person for this panel (and maybe the entire conference) spoke about practical ideas from his years of building and expanding the Fantastic Fest and the Alamo Drafthouse franchise (which is about to open a location in NYC).

League’s comments really activated for me why most festival organizers return to this conference. Horror stories, practical work-arounds, inspiring projects and productive brainstorming all occur constantly in and around the conference framework, connecting people who would never otherwise be in the same room, ever. An atmosphere develops that allows festival organizers to bond around the effort of engaging audiences with meaningful content and building bridges for filmmakers to share their work. In fact, this would be a goldmine for emerging filmmakers. Somebody ought to invite some…wait…the Texas Film Commission did. Several up-and-coming Texas filmmakers were invited to a coffee break, and for a good 20 minutes they hob-knobbed and talked about their recent work, meeting festival directors first-hand. There is no other place on earth (that I know of) where that sort of thing happens in a fashion that concentrated.

The most engaging talk was perhaps the very last one, which had to do with digital distribution. To bring you up to speed, the typical “model” independent film goes on a trajectory like this: a film gets made and goes through a cycle of development that peaks at its festival premiere (like Sundance, Tribeca, or Toronto, ideally), then secures a distribution deal (again, ideally) that may include a theatrical release, then maybe a release on DVD or on-demand channels like Sundance Selects. The problem with that model is that only a fraction of independent films go through that full process in the spotlight. For many films, a theatrical release may mean nothing. It may gain no further ground, becoming lost in sea of channels for independent film consumption, and technically “out of date” for the festival circuit. It sits in a distributor’s vault (or in the director’s closet) never seeing much light of day. In addition, the diverse swarm of amazing short films tends to get left out altogether. They really deserve a platform all their own—and many times festivals are the only place to see them.

How do films extend their shelf life in a way that maximizes their potential audience? How does a film gain audiences in a roster of thousands of new titles being released each year? On-demand and YouTube/Vimeo are certainly a big part of the picture, but how does one stand out in this wilderness, and what happens to the communal experience of film? 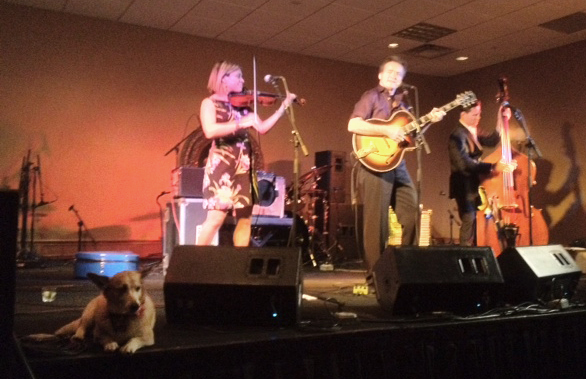 IFFS is held alongside IMFCON (the Music Festival Conference), so one night there was a showcase on the 17th floor of the Hyatt, which included Hot Club of Cowtown. They had a little corgi roadie that hung out at the front of the stage, making their jazzy-bluegrass set one of the best, and cutest, ever.

As Ted Hope called for festivals to reboot their relationships with audiences, the digital distribution talk proposed both festivals and the film industry continue their relationship therapy, collaborating in a more friendly and productive way, ultimately for the benefit of audiences. One thing is for sure—audiences love gathering around the campfire, especially in the festival environment. An iPad or even a home theater is no substitute for the big screen. A well-curated set of films in a communal setting is still a very powerful force—it can fill seats for days at a time (one panelist noted that commercial theaters are on average at 5% capacity during the week). In summary, the rate of change in this industry is almost too much to keep up with—and  there are many points and tangents to discuss. Stepping back however, it’s possible to see a horizon in which festivals become an even more important venue for reaching audiences with independent content, but also creating audiences for independent content. And in the end, the IFFS may be one of the only places where these conversations are openly happening.

I was fascinated reading this. I organize the conference (I was hired two years ago when we moved to Austin) and although I am responsible for the content, I am really not involved (by decision, not design) in the logistics of the event. Thus, I will make note of your feedback and share it with the logistics team. I am trying to make it better and more valuable.