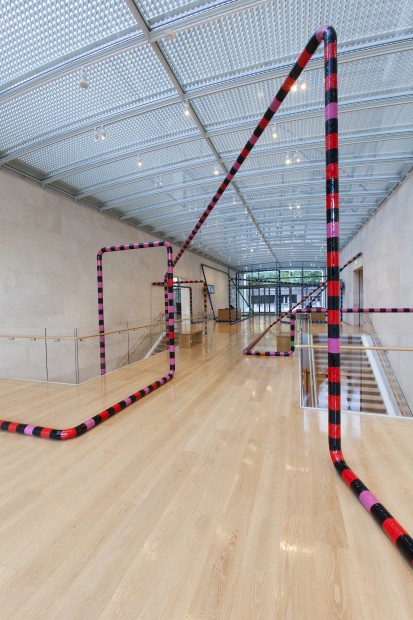 In October, the Nasher Sculpture Center installed a meandering serpentine sculpture by the Irish-born, London-based artist Eva Rothschild for its current Sightings exhibition, a series which focuses on the work of contemporary sculptors. Rothschild’s piece, called Why Not You (Dallas), is made of painted aluminum and bends its way around the main corridor of the museum and down into the belly of the lower level, where it hooks under the stairwell like a tremendous arm. The primary-to-pop color scheme of the piece recalls Rothschild’s installation for the Public Art Fund in New York’s Central Park, but here at the Nasher, indoors, the structure references the architecture of the building more than the arboreal setting in NY. The Dallas piece is playful, yet strong, and viewers are required to step over and around it to make their way through the museum and out into the garden. Rothschild, just like the piece’s title suggests, is forcing a kind of activity through the work.

I chatted with Rothschild when she was in town for the show’s opening in October. We spoke about architecture, the fetishistic art object and snakes.

Lucia Simek: So let’s start by talking about the installation you did at the Tate and your stark black intervention there in that Neo-Classical building. How did the Nasher’s building determine your approach differently?

Eva Rothschild: Well, with the Tate, the architecture was obviously extremely different than here, though bizarrely enough, the color is quite similar. Actually, the Tate is a much darker, grainier kind of space, but the architecture there is sort of lofty and oppressive, so I felt like it needed something kind of spiky. But in here, it’s actually a very bright space and also it’s new—only ten years old—so I didn’t feel like what I did in the Tate was the right approach to take in here. Also, there were limitations in terms of fixing to the building here (where in the Tate we could fix to the building in any way). So that does determine how something works. I knew I had to make something largely self-supporting, so while the piece here is ostensibly very different than the one at the Tate, a similarity is present, I think, in the sense that it kind of colonizes the building and tries to work with all the different aspects of it. It’s not an object, as such—it kind of travels and tries to take over the space. So in that way, the endeavor of the piece is similar.

When I came, I got a feel for the space. It’s got this sort of exterior which comes in quite a lot with the garden and everything, so I felt that something more colorful and more, well—I guess the Tate piece is a series of sort of jerks—there’s a shape, and then the shape ends and the shape begins—but I felt this space needed something more continuous because there’s a kind of softness to the building, and I guess I wanted to tap that sense of continuity.

The thing that was most different for me when I came was actually observing the stairs, because that was something I hadn’t gotten from the pictures. So I knew I wanted to involve the downstairs. And then, I suppose, I had made a number of striped pieces—the one in New York in the plaza by Central Park and a number of other smaller striped sculptures—and I just felt like there was a possibility to make something with the color. With the stripes (which I’m interested in generally in my work), one of the things I’m really interested in is how color can shift from one color to another, but you’re not really sure where that shift occurs. So I felt that because there was quite a long distance we could cover in the piece, I could really play with that sense of the shifting color, you know—the cooler colors to the warmer colors. I’m really interested in that kind of stepped change that’s like a kind of progression, and that was something that really interested me in moving through the space. 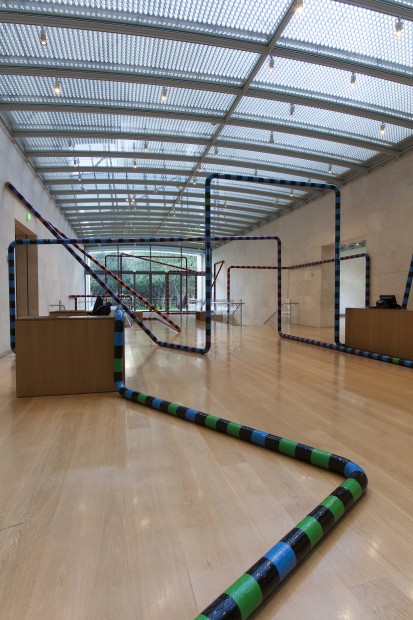 LS: About that pull from the cool to the warm—is that garden a draw for these warmer colors?

ER: Well, yeah, I shifted that actually, because initially I made it so the green was at the back, and then I switched it all around because I realized that the primary color coming in from the garden was green, obviously, so the red had to be there. That was just a very pragmatic decision, but it is quite funny, because it does feel quite different. If you stand in the middle and you look from this cool to warm, you know, I really enjoy that.

LS: I came across this piece you did for the blog “This Long Century,” about snakes with all their stripes. You said “The people are fascinated by the snakes, the snakes are not interested in the people,” and I’m wondering what that idea might have to do with this?

ER: Well, that really interests me—that idea that we have all these projections that we put onto something and the thing doesn’t respond to them. The snake doesn’t care whether we think it’s the devil or a pharmaceutical symbol or if we have a phobia of it—it doesn’t make one bit of difference to the snake.

LS: So all those assignments mean nothing to it. Talk to me about this idea that we assign meaning onto things.

ER: Yeah, the objects are inert. The objects have no feeling, but obviously we bring this way of looking to them. It’s how we look at art; it’s how we look at religious objects, the devotional object. How the object becomes kind of deified and the object has no stake in that itself—that’s absolutely our collection of human emotions and objections and perceptions, but the object itself is inert. Obviously as an artist, you’re working somehow to explain this object that holds all of these things. But it doesn’t materially change the object. The object is the object.

LS: So then, as the artist, there’s this question of when the object has arrived at holding those meanings.

ER: Yeah, when it can do something—I don’t know—with your brain and your eye. That’s the fundamental thing about making art, or making religion or making anything that’s asking people about believing in a way, I suppose, that isn’t based in a pure practicality or functionality. But then, that does something too—it increases our human experience.

LS: I like that about the snakes, for example, how they’re the emblem of so many things and themselves have no preoccupation with those identities, yet the snake is such a loaded thing. And all of your work is appealing to those universal or cultural associations we make with things.

ER: Well, I’m really interested in that—in religious objects and that sense of transference. Like lucky objects—you know, like, how is the luck contained in the object? Like, “I can’t travel without my lucky thing!” or “Let me touch the plane before I get on the plane!” The plane doesn’t care if you touch the plane. It’s not going to increase or decrease your chances of a plane crash, but still, the objects have this meaning for us. We bring meaning to objects in our lives all the time, and that’s what’s happening in the art institution. But that’s because those objects make us think different things; make us experience things differently. Objects are inert themselves, but they give us a whole range of emotions.

LS: Yes, because the utility of the art object is to make that effect, to create that range.

ER: Yeah, or tantalize that it’s going to do that and then refuse you. I know that a lot of artists would say that that isn’t what they want for their objects, but I am interested in that very romantic way of looking at art.

LS: Do you think that’s rare now, to talk about looking at art like that?

ER: I don’t know, I suppose you often look at things in a certain way to affirm what you think. Then you sometimes think everyone thinks like this, but then you have this awareness that, no, most people don’t think like this. I do have quite a romantic notion of art and this notion of transference of looking. When I say transference, I mean any sort of momentary change from something. But I am surprised sometimes, because so much of my looking is practical things—like should those screws go there. It’s really interesting when you give a talk or something and somebody will tell you about the effect of your work, and you couldn’t have anticipated that. You hope for it, but you don’t expect it.

LS: Your work carries more than your own intentions?

ER: Yeah. And there are certain artists whose work has that effect on me. The Irish artist Cathy Wilkes. For me, her work has this incredible effect—and it is very emotive, whereas my work is very formal—but her work has this sort of effect that I had forgotten art could have. So emotional and so deep. She communicates so much beyond words and beyond language, and reminds me of the possibilities for communication that art can achieve.

Cady Noland, too. When I was in college, her work was literally a complete about-face. I remember seeing her work and saying, “you can do that—beer cans and crutches?” It was a complete revelation to me! I’d say that was really quite pivotal—seeing the possibility of her work, and the toughness of it. Very liberating.

LS: And your work has its own hard-edge thing, yet it’s still very sensitive and spare.

ER: I’m interested in things having this sort of hard edge at the core. Even if it has the color or something, there’s something at the center that is really quite resilient, maybe quite harsh, saying, “Look at this! Be around this!” And the title of this piece is like that. It’s called Why Don’t You (Dallas). It’s quite jokey, but it’s also a kind of proposition. Like, why don’t you do something? Now, do something. Come on!

People are so disconnected from the act of making. And that’s what I love about being an artist—that physicality of it.

The full-length version of the following video clip is also on view at the Nasher. Rothschild‘s film Boys and Sculpture was created as part of a children’s art commission the artist received from Whitechapel Gallery, London.

Lucia Simek is an artist and writer based in Dallas. She and her husband, Peter Simek, founded the much-loved, short-lived arts and culture site Renegade Bus in 2009. She has also written for THE Magazine and People Newspapers, and is currently a frequent contributor to D Magazine‘s arts blog, FrontRow. She’s also acts as the arts commentator for the kids blog Tiny Dallas.

This is a fun exhibition where children (and adults) can “Touch” the sculpture. Participation is important, but a “Looking” element might be included.