On Black Friday, while millions were buying iPads for their six-year-olds and guns for their holsters (handgun sales broke an all-time record this year), I was staring at art in Los Angeles. Since most major galleries were closed that weekend, I visited the Geffen Contemporary, LA MOCA and LACMA and ate local fare including frozen goat cheese, “petrified” yams and deep fried Pacific crab. You know you’re in LA when the Dippin’ Dots are made of goat cheese and Ed Ruscha’s SPAM painting is hung within a ten-mile radius. 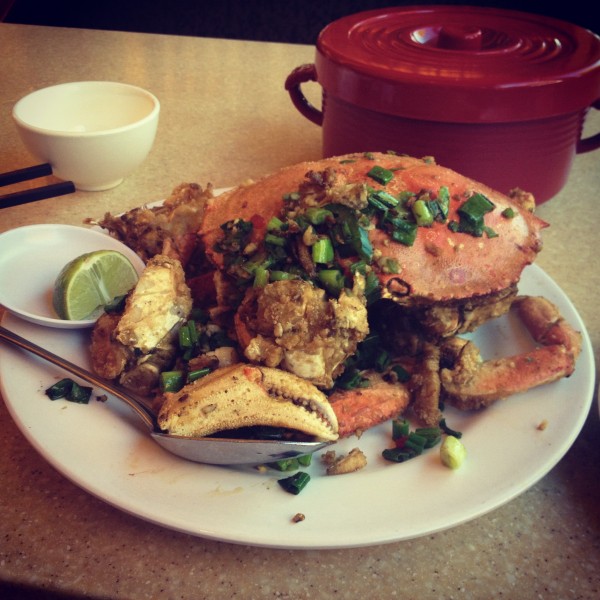 My first stop was the Geffen Contemporary with two major exhibitions: Taryn Simon’s A Living Man Declared Dead and Other Chapters I – XVIII and Blues for Smoke. Taryn Simon’s exhibition (organized by Rebecca Morse, associate curator of the Museum of Contemporary Art, Los Angeles) is a captivating collection of specific bloodlines from families, human and animal, across the world. As described in the Geffen’s press release: “The subjects Simon documents include victims of genocide in Bosnia, test rabbits infected with a lethal disease in Australia, the first woman to hijack an aircraft and the living dead in India.” 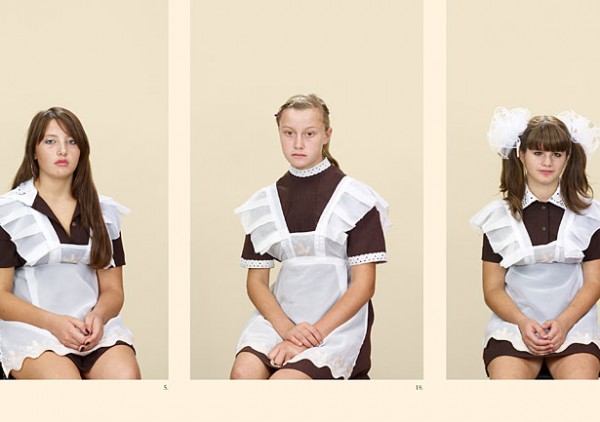 Large in scale, A Living Man Declared Dead… reads like a giant picture book of morbid reality, geopolitical history and cultural curiosity. Each “chapter” is a section of wall divided into three parts: first, large portrait panels display photos of living ascendants and descendants of the single individual under investigation; second, a central text panel constructs the details of the individual’s narrative; and third, the final panel displays images and artifacts of the narrative.

One of Simon’s most memorable pieces is Chapter XIII, focusing on Sunia Shakya from the Shakya clan of the Nepalese Newari community. Sunia Shakya, who is now 46, was chosen at age 3 to be a Kumari: a bodily incarnation of the goddess Taleju, worshipped in Hindu religious traditions. Sunia and a few other prominent girls chosen to be Kumari are confined to temples visited by devotees. The goddess “leaves their body” upon menstruation, but one 58-year-old woman who has claimed to have never menstruated is still worshiped as the incarnation of Taleju. Simon’s examinations offer a dense exploration of society that appears clinical in its presentation, yet with each portrait a deep intimacy builds with each subject of every chapter. 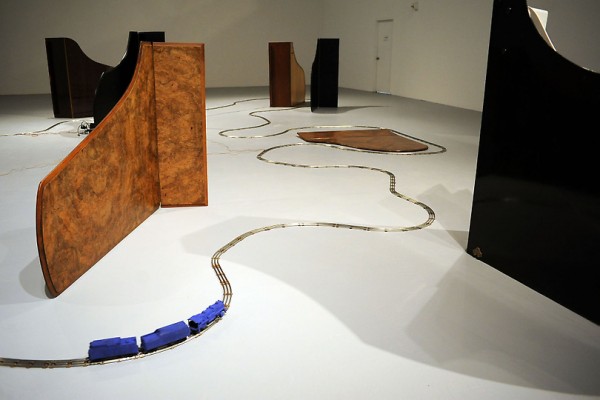 Next door in the main hall of the Geffen Contemporary is Blues for Smoke, an exhibition that has been developed over several years by LA MOCA Curator Bennett Simpson alongside artist Glenn Ligon, and features over 50 visual artists and musicians from Jean-Michel Basquiat, Mark Bradford and Martin Kippenberger to Howlin’ Wolf, Bad Brains and Thelonious Monk. “Blues for Smoke is likewise motivated by some basic desire to create space—to find a clearing—so that the complexity of our lived experience of culture and identity might come into sharper relief,” says Curator Bennett Simpson. “[The role of the blues] expresses one curator’s sense of the diversity and legacy of the blues…as William Carlos William observed, that “’dissonance / …leads to discovery.’” 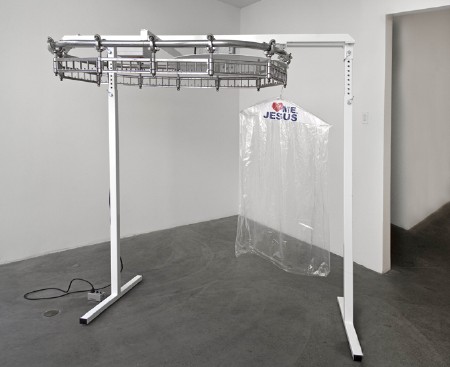 My two favorite pieces in Blues for Smoke were Dave McKenzie’s Fear and Trembling (2009) and Alma Woodsey’s Late Night Reflections (1972). McKenzie’s sculpture features a dry cleaning conveyor belt upon which dangles a hanger and a drape of clear plastic. The hanger is covered in the familiar dry cleaner’s white paper and red heart design, but McKenzie’s reads “<heart> ME JESUS.” McKenzie’s work often relys on culturally prosaic images and objects. Here, a lone hanger stops and starts in a mundane journey which paradoxically heightens and subdues the loaded message, as through the lens of cultural ideology and humor set against the backdrop of a socio-political present. 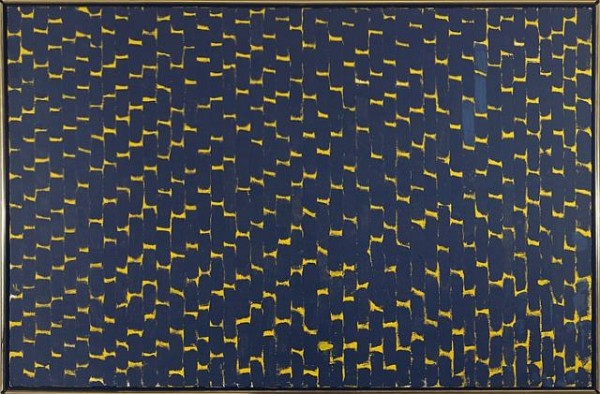 Woodsey’s Late Night Reflections is a seemingly simple painting of blue swatches of paint over a yellow background. The painting looks unremarkable until you notice that three swatches in the upper right part of the painting are a different color blue. Hypnotizing in its rhythm and subtlety, the painting reads like sheet music where vibrations of color and form and variations of mark become notes and lyrics. The three swatches of lighter blue in Late Night Reflections stand out both visually and musically, like a high pitch on a harmonica over a sea of tenor horns. 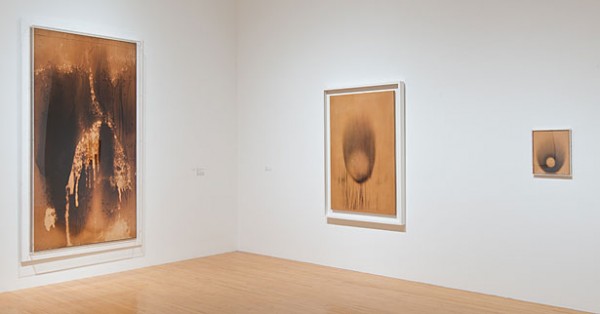 Still in downtown, I stopped in to see LA MOCA’s exhibition Destroy the Picture: Painting the Void, 1949–1962, which “focuses on one of the most significant consequences of the rise of abstraction in 20th-century painting: artists’ literal assault on the picture plane.” Organized by Paul Schimmel, former chief curator of The Museum of Contemporary Art, Los Angeles, in association with the Museum of Contemporary Art Chicago, the exhibit touted notable paintings by Japanese painter Shozo Shimamoto, a few monochromatic Rauschenberg pieces made when he was hanging out with Alberto Burri, Lucio Fontana’s works on paper and the most stunning—Yves Klein’s Untitled Fire Painting (F 27 I) from 1961. I could go into more detail about the show and how I can’t get into an entire room of Lee Bontecou’s giant painting-sculptures, but really after seeing Yves Klein’s Fire Paintings created to mark the death of painting itself, I have nothing else to mention.

Before heading into LACMA, I had a snack outside the La Brea tar pits within line sight of a shirtless, overly tanned blonde man contemplating the meaning of blue jean cutoffs and/or how to return to 1982. Getting up, I passed a few plastic mastodons and walked over to LACMA in anticipation of the Stanley Kubrick exhibition. I arrived to find out the exhibition is on a scheduled timed entrance that gave me an hour to look at Walter De Maria, Ken Price and Michael Heizer’s Levitated Mass. 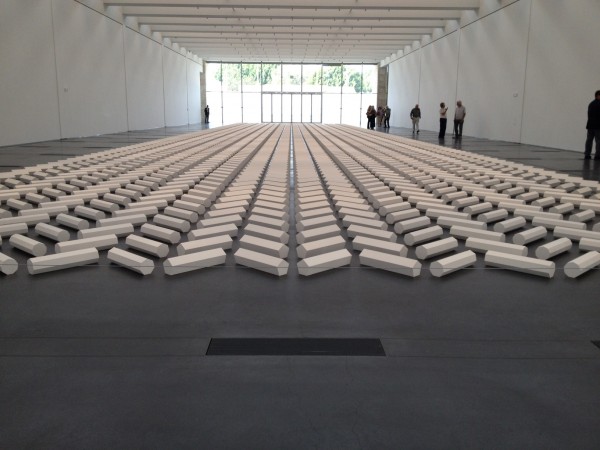 Walter De Maria’s The 2000 Sculpture is 10 x 50 meters of perfectly proportioned pieces of porcelain; mathematically sublime, it reaches from one end of the Resnick to the next, providing a stark contrast to both the Caravaggio and Ken Price exhibitions flanking either side of the pavilion. Veering off to the left, I entered Bodies and Shadows: Caravaggio and his Legacy and felt more than overwhelmed as the Black Friday art crowd surrounded each painting with vigor, uttering phrases like “Yes, that technique is called Chiaroscuro” and “No, we aren’t going to Target after this.” Despite the crowd, I found a moment to reflect at LaTour’s La Magdalen with the Smoking Flame. Strikingly contemporary in composition and stylistically different from any other painting on view, LaTour pierces through the time space continuum to bring renaissance Vanitas to 2012. Frustrated with the overhung and over populated exhibition but unable to leave LaTour’s side, La Magdalen could have taken up an entire breezeway of Renzo Piano’s building for all I cared. 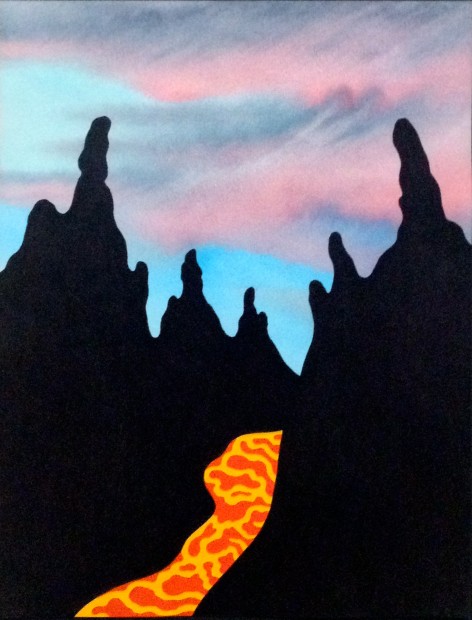 Before making my way to Kubrick, I stopped in to see Ken Price’s retrospective and walked under Heizer’s boulder. Ken Price’s sculptures were fun, whimsical and polished to perfection, yet they did not strike me as much as his small watercolor drawings tucked away in the reading room. These small works on paper were more interactive in a biographical way than the large sculptures, and I felt a kinship with them. I know it’s pretty lame to fall in love with Price’s un-famous quirky drawings of volcanoes and meth labs, but they were so full of humor, narrative and striking color that I wanted to go on a road trip with Price, split a Ho Ho and throw one of the last remaining Twinkies into a bubbling volcano of molten lava. 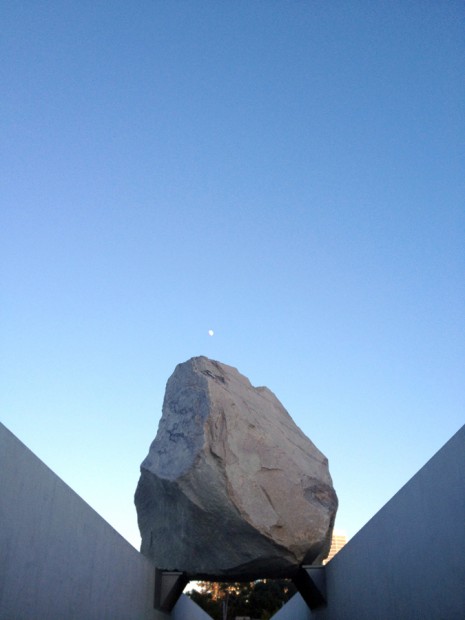 As the sun set, I walked into and under Heizer’s Levitated Mass described by LACMA as a piece which “speaks to the expanse of art history, from ancient traditions of creating artworks from megalithic stone, to modern forms of abstract geometries and cutting-edge feats of engineering.” I don’t know if it was my impatience to see Kubrick or my lingering hunger for something other than the organic fruit roll up I had at snack time, but Levitated Mass didn’t quite engender the awe I thought it would. Under it, I noticed the structural components more than I felt a connection to art and ancient civilizations. Like a magic trick where you see a glimpse of a card up a tuxedo sleeve, Levitated Mass gave away its secrets and reminded me more of Wile E. Coyote than megalithic stone carvings, geometric abstraction, or expanses of art history. 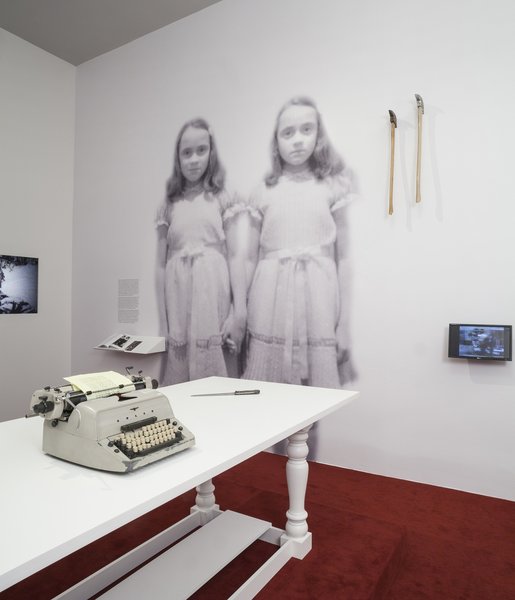 Finally finding my way back to the Kubrick exhibition, I was greeted by two massive movie screens sifting through famous scenes of Kubrick’s films. The first room beyond the theater felt overwhelming and full of props and texts from entire scripts to Kubrick’s own “on set” chessboard. The exhibition is massive and encompassed every undertaking, including artifacts from his never realized movie “Napoleon.”

Organized by the Deutsches Filmmuseum, Frankfurt am Main, Christiane Kubrick and The Stanley Kubrick Archive at University of the Arts London, the exhibition investigates “the breadth of Kubrick’s practice, beginning with his early photographs for Look magazine, taken in the 1940s, and continuing with his groundbreaking directorial achievements of the 1950s through the 1990s.” Stanley Kubrick feels like an in-depth Disney ride through every Kubrick film without climbing into a plastic pirate ship. Highlights include pink papered scripts from “Lolita,” the typewriter from “The Shining” complete with “All work and no play makes Jack a dull boy” typed onto yellow paper, the white mannequins from “A Clockwork Orange,” and HAL’s omnipotent black lens from “2001: A Space Odyssey.” 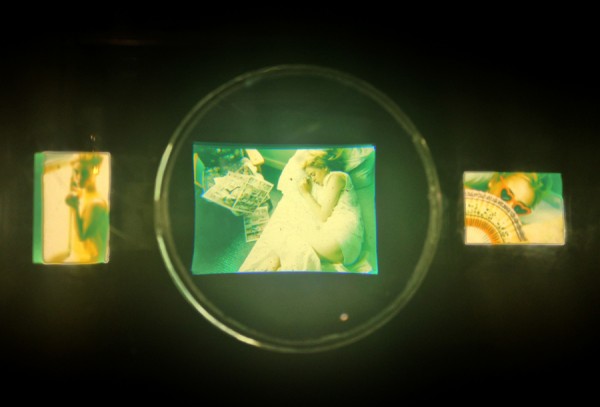 “Lolita” film stills under a magnifying glass at Stanley Kubrick

As an avid Kubrick fan, I left the exhibition completely excited and wishing there were more days to enjoy it. Although I couldn’t read every wall text or watch all the movie clips, it truly was a fulfilling experience. More than just a “behind the scenes” look, LACMA offers up the proof of the immense love and commitment Kubrick had for each and every one of his projects. Even in his early snapshots for Look magazine, one can decipher the movie still and the incredible vision that pulsates out from the image, turning our world into another of Kubrick’s making. 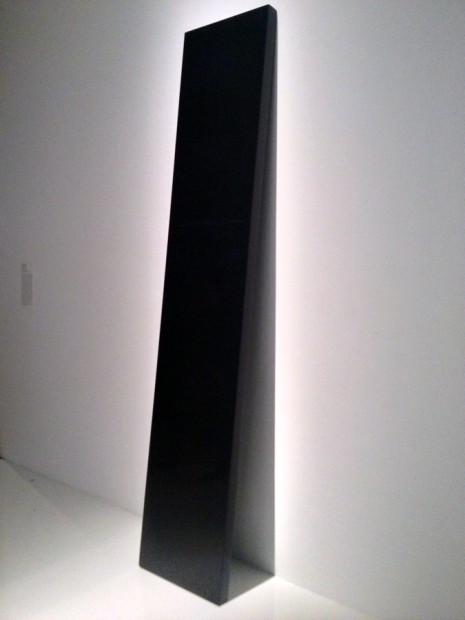 One of my favorite stops in the labyrinth of the Kubrick exhibition is sculptor John McCraken’s Nine Planks IV from 1974, which bears resemblance to Kubrick’s 2001 monolith. The piece is dimly lit and tilts nonchalantly against the wall of a pass-through which, for me, made the work more alluring. The wall text next to the piece quotes McCraken: “I’m after a physical object that appears to be nonphysical, hallucinatory, or holographic…I want something that suggests the coexistence of more than one dimension or world at any given moment.”

In Kubrick’s films we see real actors, sets and props from the simplicity of “Lolita” to the grandiose sets and complex acting in “The Shining.” Kubricks’ “reality,” both on-screen and under glass at LACMA, like McCraken, simultaneously reaches out to other worlds and existences through his artistic vision. Humbert Humbert and Jack Torrance aren’t stuck in their prescribed decades, but persist backward and forward as mainstays of human folly and incalculable madness. McCraken and Kubrick work in tandem at LACMA to prove that art can not only become a window to the artists’ feelings and concepts, but can also hope to connect with the impossibility of other existences unseen and unknown, yet deeply felt.

Debra Barrera is an artist and writer in Houston, TX