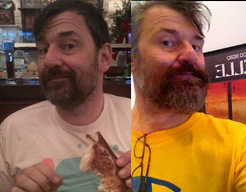 Another new feature of next spring’s CAM, CAMx, is an annual artist-run-space exchange. This time around, Unit B Gallery (San Antonio) will host Houston’s Redbud Gallery.

The 28th Contemporary Art Month San Antonio happens in March 2013. Launched as an independent exhibition in 1986 and then co-opted by the city, CAM became an independent organization in 2003 and received 501(c)(3) designation in 2012.