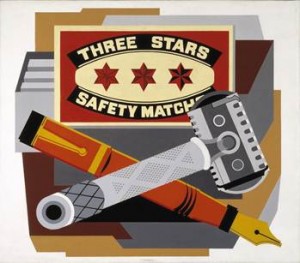 The ever-ready PR department at the Dallas Museum of Art informs us that one of their pieces, Gerald Murphy’s 1924 Razor, will be featured on a postage stamp commemorating the 100th anniversary of the Armory Show in New York, credited with introducing modern art to America. The piece is one of twelve works featured in a new “Modern Art in America” sheet of self-adhesive “forever” stamps and will be available in early 2013.

Other works honored on the sticky stamps include  Stuart Davis’s House and Street, Charles Demuth’s I Saw the Figure 5 in Gold, Aaron Douglas’s The Prodigal Son, Arthur Dove’s Fog Horns, Marcel Duchamp’s Nude Descending a Staircase, No. 2, Marsden Hartley’s Painting, Number 5, John Marin’s Sunset, Maine Coast, Georgia O’Keeffe’s Black Mesa Landscape, New Mexico/Out Back of Marie’s II, Man Ray’s Noire et Blanche, Charles Sheeler’s American Landscape, and Joseph Stella’s Brooklyn Bridge. The sheet also carries a quote from Marcel Duchamp: “America is the country of the art of the future,” which is not on a stamp, and has no monetary value. 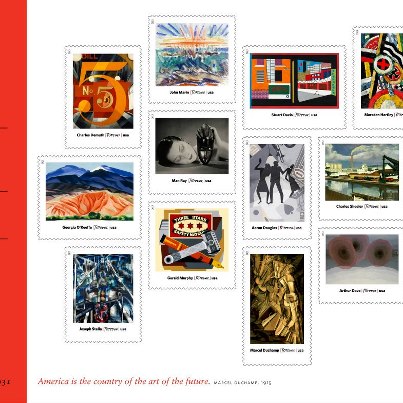