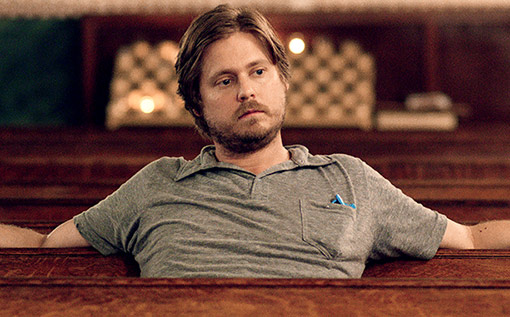 How can good people appreciate despicable behavior? What can it seriously tell us about the values we hold? These questions are repeatedly addressed and challenged by artists and filmmakers, to be sure, but if you’ve been to see The Comedy, you’ve surely asked them as well.

The Comedy isn’t really a comedy, but if you find yourself laughing, you shouldn’t feel despicable (though I could just be making excuses). The film stars Tim Heidecker, mostly known for Tim and Eric’s Awesome Show: Great Job, where he and Eric Wareheim (who co-stars in The Comedy) both engage in what might be classified as bizarre, unsettlingly funny performance art. Tim and Eric typically revel in absurdity—pushing the edges of satire with a sharp nostalgia for VHS and local television aesthetics. Their other recent film together—Tim and Eric’s Billion Dollar Movie—is a decadent peak of a Dada-potty humor-meets-Hollywood style, with stars like Will Ferrell, John C. Reilly and Zach Galifianakis joining them.

The Comedy is a bit different. In some ways, it’s an evolution of Tim and Eric’s trajectory—from the first scene when Swanson (Heidecker) repeatedly berates his dying father’s caretaker in possibly the most inappropriate way—or maybe it’s when the sidewalk cafe discussion about “hobo dicks” occurs, or maybe it’s when Swanson and friends (including James Murphy of the now disbanded LCD Soundsystem) climb the pews in a Catholic sanctuary and try to chant the lowest possible human tone in unison, sliding back and forth like animatronics in a performance worthy of Tim Conway in a Carol Burnett sketch. I know my parents and particularly my grandfather (a preacher)—who always laughed hysterically at Tim Conway—would not laugh at Tim and Eric. I’m not saying Heidecker is my generation’s Conway by any means, and I’m pretty sure I’m not totally rotten. I think I can tell when something goes from uncomfortably funny to just plain shock and awe (Pink Flamingos, Trash Humpers, maybe Paul McCarthy?). So how do we demarcate pity or even disdain for a character or story while openly laughing and being appreciative that it’s being told?

I’m sure it depends on the performance and/or intent of any particular piece—Tim and Eric certainly scale the outer realms of perceivable comedy and total human disconnection. But there’s something in The Comedy (starting with its title) that suggests more than pure nihilism. There are times when Swanson tries to connect with a world that is foreign to him in just about every respect, his life numbed by cynical cliches and absence of direction. His attempts to find genuine experience in spite of his recurring dysfunction add a gleam of light and philosophical weight to the film. It also makes me think that while viewers (such as myself) love to snicker at the most pitiful characters, we too are searching for a glimmer of humanity in them. In that respect, The Comedy doesn’t disappoint—whether you’re seeing the humor behind the darkness, or the darkness behind the humor.

John,
I really appreciated your article. It definitely makes me want to see the film. I often think about this type of comedy or humor, which is very apparent in our media culture. (And unfortunately too apparent in my living room). Sometimes it is over the top like Baron Sasha Cohen and begins to function more as satire (although I question where the majority of the population gets it on that level). Then there are shows like 2.5 Men, Family Guy or films like Hangover that are sexist, racist and very inappropriate (esp. for teenagers), yet everyone thinks they are hilarious. I admit to laughing at parts of Hangover and then feeling like a despicable human afterwards. I’m not sure what my point it here–just that your article made me think more about these issues and what this brand of entertainment says about our culture and us.

Thanks for the feedback Colette. I’ll be interested to hear what you think.