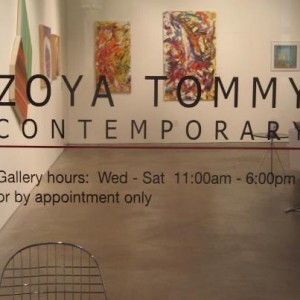 Houston’s Zoya Tommy Contemporary Gallery, aka PG Contemporary, opened her first show at a new space at 4411 Montrose, beginning a new chapter in her upward spiral, but ending a brief but charming series of impromptu shows that filled the temporarily vacant space. SAN-TA-ART, Tommy’s holiday show, opened December 1 and runs until January 5, with hours Wed-Sat 11-6. Said Tommy, after the opening,”Having a gallery is not all that glamorous. I need to go remove the trash and clear the coolers left over from last night—work day!” Up next at the new venue: Frank X Tolbert in January

This and That: Birds