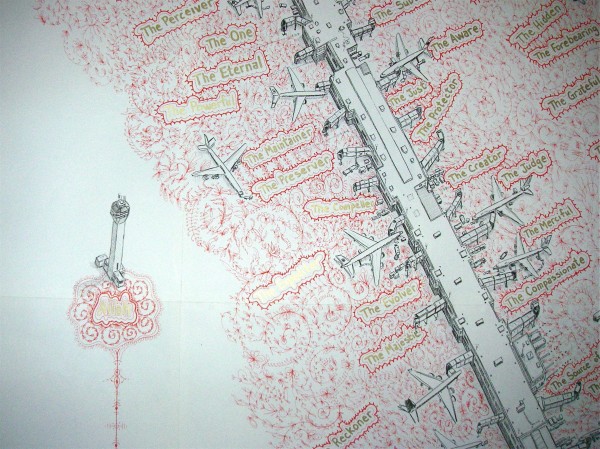 Three different exhibitions—Sandow Birk and Elyse Pignolet’s The 99 Names of God, Moreshsin Allahyari’s Re: apologies to the many wonderful Iranians and Christopher Blay’s Machine Time are on display at the McKinney Avenue Contemporary through December 8. Both Birk/Pignolet and Allahyari examine mis/perceptions of the Middle East, addressing the ramifications of political warfare. Meanwhile, Blay explores time travel.

Sandow Birk and Elyse Pignolet’s large-scale drawings depict the five airports involved in the September 11, 2001 attacks. Each individual departure gate is identified with one of the names attributed to God in the Qur’an and the Hadith (the second most important, sacred book in Islam). What interests me most about Birk/Pignolet’s works is the collaborative process. The Southern California-based husband and wife duo are committed to social justice and have collaborated on numerous projects. The 80 inch x 72 inch drawings are comprised of 30 smaller pieces of paper put together in a grid. The panels create a literal fragmentation, like a puzzle pieced together. Far from pristine, the paper has wrinkles and crimps suggesting a well-worn, well-used map.

Did Birk draw the airports first, with Pignolet adding the decorative flourishes and names later? Or did they work more holistically? Why not use one large sheet of paper, rather than 30 small sheets? Since the entire work is framed, economics or cost of transport did not seem to be an issue. The drawings are not easily categorized. They are not architectural renderings of the airports, yet they are drawn with incredible detail. The style is more similar to a tourist map, with a hint of cartoonish flare. Contrasting the rigid architecture are Pignolet’s ornamental, filigreed flower drawings, which when viewed from afar look like a virus overtaking the architectural structure. Pignolet derives the motifs from historical hand-illuminated Qur’ans. 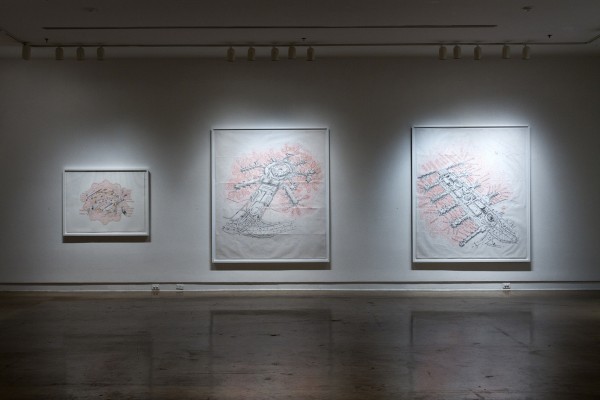 Installation view of The 99 Names of God. Photo by Derek Rankins.

What is the significance of language in the work? In the SFO and Boston Logan drawings, the text is in Arabic. In LAX and Washington Dulles, the words are written in English. In Newark Liberty, Pignolet used phonetic Arabic transliterated into the Latin alphabet. The Reckoner, The Vast, The All-Embracing, The Sublime One, The Guardian, The Feeder, The Forgiver, The Abaser, The Mighty, The Provider, The Subduer, The Creator, The Compeller. When written in Arabic, the meanings of the words remain hidden to a Western audience. The ornamental script becomes nothing more than a design element in the drawing. The phonetic Arabic looks more familiar, but still remains coded. The English translations give us pause. Many pundits tend to focus on the great chasm between Christianity and Islam. Yet in looking at the multitude of names, one sees many similarities to the names of God listed in the Bible. (I tried to count for comparison purposes, but there were too many. Suffice to say that there are hundreds of names for God in the Bible.)

Ultimately, it is up to the viewer to draw their own interpretations from these works. Smartly, Birk/Pignolet shy away from any polemic pronouncements about politics or religion in their artist statements. They use the language of mapping and juxtaposition of image and text to ask viewers to question their assumptions and perceptions about difference and “other.” 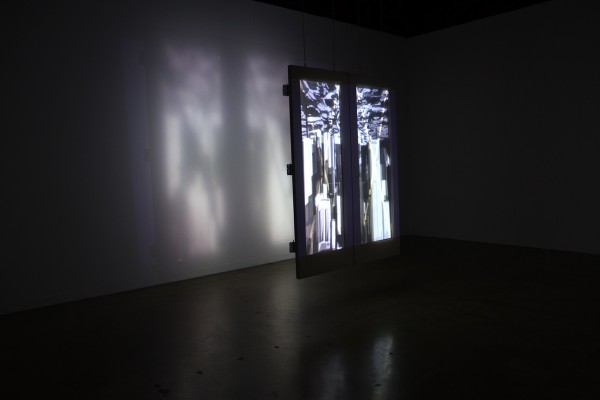 Moreshin Allahyari,  Re: apologies to the many wonderful Iranians. Photo by Derek Rankins.

Moreshin Allahyari’s video installation Re: apologies to the many wonderful Iranians is a powerful and haunting work. I could have watched the looped video for hours. In the spirit of works like 7 Lights by Paul Chan and Out of Here by Krzysztof Wodiczko, Allahyari creates a landscape that is both beautiful and horrific. Projected onto two windowed doors suspended vertically from the ceiling, the video depicts an apocalyptic scene—a futurist urban landscape filled with skyscrapers. Buildings and objects implode, collapse and come together again. It is unclear whether the scene is inverted. Is the sky falling or is floating debris exploding into an upside down sky? The two doors have large taped X’s, referencing how windows are taped during wartime or hurricanes to prevent shattered shards of flying glass.

By projecting onto the doors, the work becomes an architectural structure—both a barrier and a window. It entraps, yet protects. The projection also creates shadows on the wall behind, adding further dimension to the work. The viewer can walk around the sculptural object, yet his/her vision is obscured from the rear. In addition, the viewer never becomes part of the installation, which enhances the feeling of isolation and helplessness.

While the video hypnotically mesmerizes the viewer, the sound ruptures the trance. Tension builds and recedes as sounds of aircraft and sirens punctuate the space. The sound, by Andrew Blanton, was taken from the Iranian National Alert Program that played on television and radio during an attack from Iraq during the 1980s.

Although the video stems from Allahyari’s specific personal memories of growing up during the Iran-Iraq war in the 1980s, the work also functions on a more universal level. It could be any war during any time period. Perhaps the bleak, futurist style refers to history repeating itself. Unlike Birk/Pignolet’s neutral language in their artist statement, Allahyari takes a strong political stance. “It is a response to the unethical and proud reports and discussions that praise sanctions and wars on Iran to stop the Iranian government’s nuclear activities….Legitimizing mass slaughter that sanctions accompany.” While her language is polemic, the work is not. The looped video speaks to the cycle of war. As viewers, we are trapped inside, witnessing the devastation, powerless to act.

While the MAC does not always link their exhibitions thematically, I thought it was a curious choice to include Blay’s work with the more overtly political work of the other artists. At first glance, Blay’s quirky installation Machine Time seems out of place. However, as I thought about how perceptions of historical events change with time, I realized that Blay’s work addresses how technology, especially imaging technology, drives our perceptions or misperceptions of history, as well as specific cultural and political events. 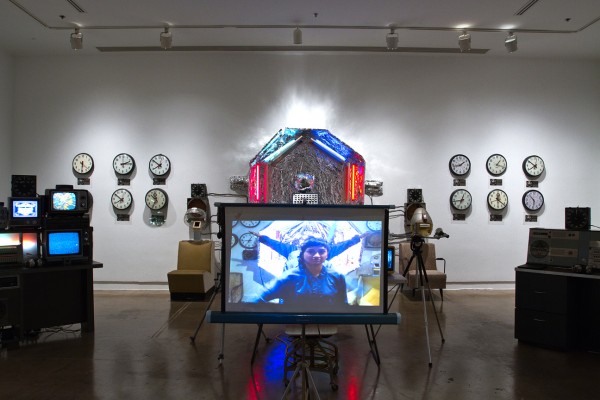 Blay’s installation of a time machine (or machines) that record time reminds me of Back to the Future meets The X Files. Infused with playful, inventive humor, the work made me smile. I wished that I had been one of the lucky 12 chosen to travel in his contraption. His elaborate assemblages include salvaged, antiquated equipment (many pieces are old camera and darkroom supplies) that result in a whimsical world of mad science.

On the back wall, an illuminated hexagon glows with colored mylar and aluminum foil. This is the activator module—whatever that means. Attached by wires on either side are two old hair-drying stations. Twelve clocks, all set to different times, are next to the drying stations. Labels such as “now,” “present,” “after,” “past” and “never” describe the time. A rusted medium format camera, a Polaroid reel-to-reel, various old TVs, an overhead projector and other equipment all transport the viewer back to a certain time. The opposite wall contains two space suits. Probably my favorite item in the room is an old revolving cylinder formally used to go in and out of a darkroom. The sign on the cylinder says “Decontamination Chamber.” The irony of course is that the cylinder now is decommissioned. It does not have the ability to transport anyone anywhere. 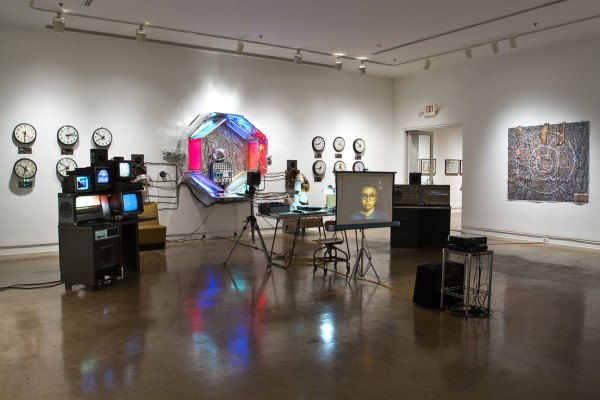 I admit that I love all the paranormal TV shows, from early Twilight Zone episodes to the most recent Fringe season. In the last few episodes of Fringe, Walter discovers his old laboratory has been preserved in amber and he steps back in time trying to decode messages left on VHS tapes. Blay’s installation functions in this way. The viewers serve as archeologists from the future, trying to uncover the hidden messages left by scientists.

A few videos activate the space with human presence. Were these the scientists who traveled through time? The success of the installation is that the work raises many more questions than it answers. It is not a spoof or parody, yet is full of fun and imagination. The collection of equipment that Blay describes as ephemera from “camera culture and the effects of images that transcode rather than translate information between the object and viewer” serves to legitimate the space with a certain authenticity.

All three exhibitions made me think—long after I left the museum. It is well worth a visit.

Multi-media artist Colette Copeland recently relocated to Dallas from Philadelphia. She has written for Afterimage—Journal of Media Arts and Cultural Criticism and Ceramics: Art and Perception Magazine. Her work can be found at www.colettecopeland.com.