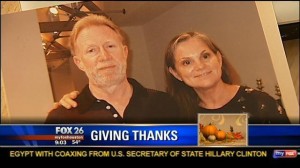 Houston artist Casey Williams, in a coma due to complications from West Nile virus, missed the opening of his show at Williams Tower Gallery in Houston, but awoke in time for Thanksgiving to the relief of his family and friends. Williams had a high fever with brain swelling; at one point doctors gave him only a slender chance of recovery.

Williams’ wife , JoAnn was there when he opend his eyes, and told Fox News of her surprise: “At first I was not believing it.  I couldn’t believe he was looking at us and tracking us and then I began to see real recognition.” Williams’daughter Margo knew he would make it, though, from the  sour expression on her father’s face when she “turned on the hip hop station and made him listen to Beyonce cause we thought that would wake him up.”

Casey Williams show at the WilliamsTower Gallery is up through November 30th.

This piece strikes me as unnecessarily glib – from the headline to Beyonce’s image and caption. Ugh.

Bill, I’m not sure it’s really any of my business but I do appreciate the edit. Thanks and all best.