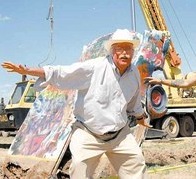 The New York Times has picked up on a blossoming Amarillo imbroglio: Stanley Marsh 3 is accused of sexual misbehavior with eight young men, according to lawsuits filed in recent weeks. There’s a smell of blood in the water: Marsh’s wife, son, business associates, and the mangers of the Chase Tower office building, where some of the alleged offenses occurred, are all named in various suits, with high-profile lawyers lining up on all sides.

Amarillo police are investigating, and a special prosecutor has been appointed. Marsh’s offices have been searched, and evidence seized. So far, expressions for or against the accused have been wary: even the most wholehearted expressions of support for Marsh contain backhanded excuses, like this one from Houston attorney Dick DeGuerin, who defended Marsh on similar claims in the 90’s: “Stanley is an unusual person. He’s brilliant, highly educated, very intelligent. But he sticks out in a place like Amarillo, a place where people who are unusual are frowned upon.”