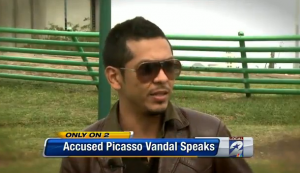 Intrepid local TV news reporters tracked Uriel Landeros to Monterrey, where he is hiding out from charges of felony graffiti and criminal mischief in Houston after allegedly spray painting  over Picasso’s Woman in Red Armchair at the Menil Collection. In a brief interview with KPRC TV’s Nefertiti Jacquez, Landeros claims association with the Occupy movement, and that his alleged action was aimed at righting wrongs and exposing the corruption of banks, government and large institutions in the United States and Mexico. Asked if he plans to return to Houston to face the charges, he said “it’s not my priority right now,” as commenters on the video froth.

In related news, the Yes Men, also claiming affinity with the Occupy movement, also using direct actions to publicize their positions, but so far staying just on the right side of the law, have almost reached the $100,000 goal for the Kickstarter campaign to fund their new movie!