I had an eyeball exhausting fun-filled weekend at this year’s Cinema Arts Festival.  Because there was so much of it, and because I don’t have credentials to know much more than my own gut reactions,  the good and the bad quickly separated for me. 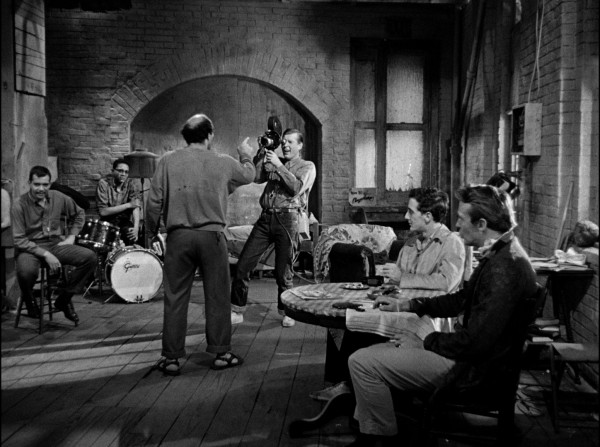 The Connection by Shirley Clark

The first film I saw was  The Connection, and this was one of my two favorites. The film takes place in a junkie’s apartment where a director and cameraman are attempting to document the real lives lived there. The film is a breakthrough, even now, in terms of showing the mechanizations and manipulations of capturing a subject. Despite the hit you over the head confessionalism, at some point you are swept up along, feeling like you really are seeing into these characters. Clarke and her actors play on the line of performance and representation with such dexterity that I need to see this 10 more times to suss out all the layers. The Connection is both brutal and hilarious to watch. From a five minute sequence in which a character high as balls eventually puts a tea cup on the ground, to an evangelical old lady invited to the flat by Cowboy, to puss being squeezed out of a stab wound to the neck, to a fantastic jazz score, this movie has it all. The movie gets high along its characters and blurs the line between obnoxious monologues played at the character director’s camera and convincing diatribes played out for Clarke’s. I missed the other Shirley Clarke screening, Ornett Coleman, but it is coming back to Houston for Jazz on Film at the MFAH later this year. 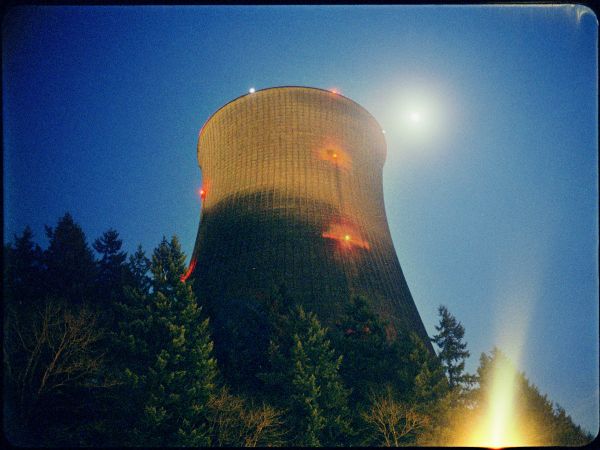 Vanessa Renwick‘s shorts were the other standout experience for me. This was my first exposure to her and to her sweeping range. She uses devices that work instead of trying to invent new ones for the sake of it, so what results is really solid storytelling that is fresh because of her point of view, not because its trying desperately to be fresh. She collaborates with some incredible musicians for scores that are contemporary and gorgeous. From the spooky babies  in Britton, South Dakota,  to the visionary artist in Richart, she has an extremely adept hand at divulging and allowing mysteries to unfold with a sweet, but not saccharine, sense of humor. She also uses beauty and narration without apology, and gives us this sublime jellyfish moment called Medusa Smack. 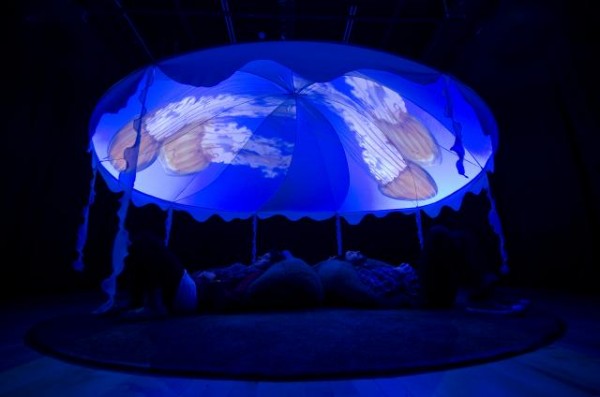 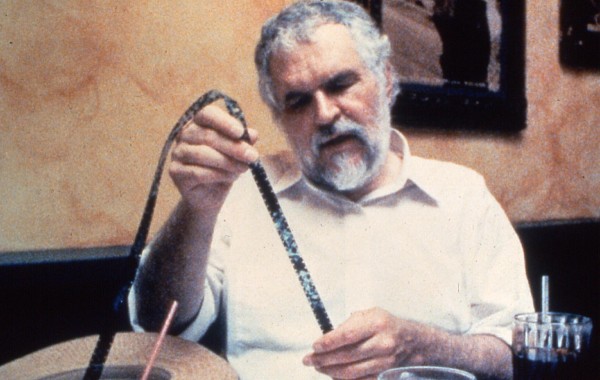 It was beautiful to see Stan Brakage‘s films, but I think you would really have to be a devoted aficionado to appreciate their introduction. I did not know what I was getting into, but from a very lot of very long movies of Brakage being a genius at a coffee shop, being a genius at a restaurant, being a genius wearing a big coat in warm weather, I left feeling like I knew what Brakage smelled like and I just wanted to see the films. 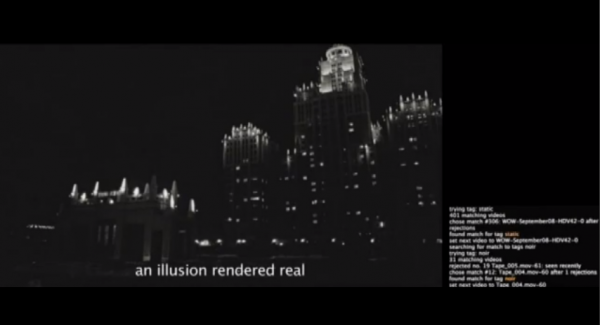 I went to Aurora Picture Show to see what in description was one of the most interesting experiments of the weekend. Apparently the “serendipity machine” that spits out whiteonwhite:algorithmicnoir came from a program designed to help the Rufus Corporation find footage labeled with tags. Now it’s the mechanical curator of 3,000 clips, 80 voiceovers and 150 pieces of music that are endlessly remixed into loosely coherent collages on screen. It is an interesting trick, but the question I never got to ask was: “What was cut out?”  Was the whole pool of footage just plopped down for the computer to deal with? How did you write a script for it? Did you vacillate between trying to write meaning and giving it over to chance, or did you stop when you realized this thing could generate movies for you? Eve Sussman was not in attendance, but Jeff Wood, who acts in the footage spoke on the challenge of embodying a character without a plot. When pressed he said that he did hold within his mind a circumstance where all of the material could cohere into a full arc, and that he does think that sustaining this possibility (though not divulging it) is important. While I find the premise interesting I heard nothing on the (possibly quite simple) architecture of the program or if it had anything to do with the content besides a vague theme of surveillance and machinery, so I sometimes wonder whether these database culled works go over well simply because there is not enough authorship to criticize. 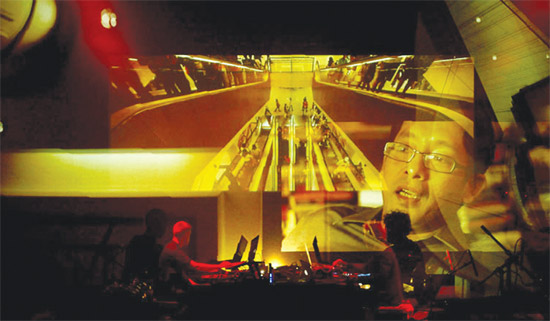 Likewise, SuperEverything* was whoa, so much everything. For all the gorgeous footage and multilayered sound, it kind of just amounted to a long format public service announcement about globalization, climate change, racial tolerance, and identity. There were a lot of extremely vague statements taken out of context and overlaid onto visual candy and sporadic shots of colorful locals in Malaysia. The best part by far was the musician Ng Chor Guan who created the original, live electronic score and who also played two bowls of water, a bicycle, and a theremin. Yes it’s cool when people play these quirky instruments, (my favorite ever was a metal slinky duct taped inside a Styrofoam cooler), but he played them really well. The water transcended a gimmick and became really moving, at least to me, and I’ve heard plenty of cooky, warbling theremins, but Guan’s nuanced command of the instrument brought out a haunting, beautiful howl. It turns out that the Light Surgeons came from night club entertainment and wanted to add more content.  They are about to start a residency at UH’s Mitchell Center creating a work that deals with Houston and energy, funded by the George P. Mitchell’s endowment earned from drilling, developing the Woodlands, and pioneering fracking. I hope they get their footage dirty and work with either a heavier hand or fewer unmemorable aphorisms here in Houston.

I saw Kanzeon in the same day, which was probably a mistake. It featured a lot of extremely interesting footage of the use of music in Japanese culture, ritual, and religion. The documentation of performances were fascinating, but I found myself taking little naps during all the extended shots of water droplets and bug close ups in between. Maybe I was just on movie overload, but I wondered how someone who got to follow such a range of diverse musicians could end up making a movie that only hit one note. 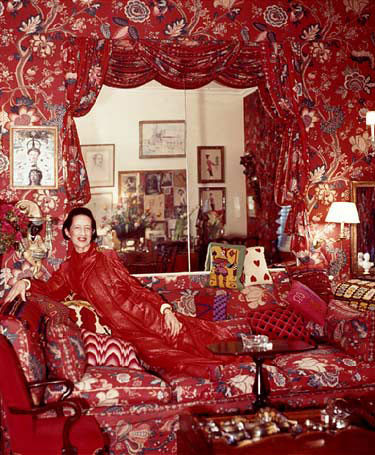 The last film I saw was Diana Vreeland: The Eye Has to Travel. I was about to skip it because I’m not interested in fashion, but then I saw the preview of this loud, brazen lady and figured it was worth it. This film is a breathless, charming, and delightful celebration of Vreeland’s eccentric flights of imagination. The audience was enthralled, gasping, bursting out in laughter, muttering under their breath. Afterwards director Lisa Immordino spoke with local philanthropic demigoddess Lynne Wyatt who looks like a porcelain doll and speaks like a cowgirl. She hosted the best Q&A I saw all weekend.
In conclusion, next year,  I wish someone would make a documentary about the Q&As at the screenings. It ranged from  “Did you think of selling this? You know, like on a DVD?”  to long bouts of cinema experts chuckle at nothing apparent, to live performances of IMDB content, to really cute banter between aficionados whose passions are written on film.
1 comment

I would have liked to see both performances of Super Everything to make a comparison considering people who saw both thought they were different. This description is really on point, although I think overwhelming with a level of vagueness in the context of Data mining or social overload is an aesthetic reflection of the content and not necessarily a weakness of the performance. The strength of the visuals leave an opening for even more powerful content or dialogue similar to how prior to the show the audience comments were the first projection via twitter. Let’s see what they do next, yes?