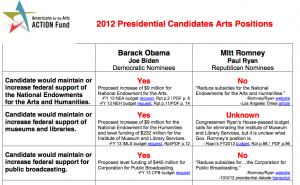 Arts advocacy PAC Americans For the Arts Action Fund  has published a presidential arts policy checklist, comparing the two candidates’ positions on arts issues.
On the list of seven yes or no questions concerning the funding of federal cultural agencies, the Corporation for Public Broadcasting, and support for arts education, and arts volunteering, the Obama-Biden ticket notched six yes and one no; Romney-Ryan, four no and three unknown.

The one no for the Democratic ticket was for Obama’s proposal to reduce the charitable tax deduction for people who earn more than $250,000 from 35% to 28% of their gifts’ value, which could potentially impact charitable giving to the arts nonprofits, among others.

Americans for the Arts Action Fund also recently updated its grades for every member of the U.S. House of Representatives, based on how they have responded to seven issues — including whether they’ve joined the Congressional Arts Caucus, four votes on spending and their responses to two “dear colleague” letters among House members that sought support for arts funding. The organization’s Congressional Report Card also lists 2010 ratings for members of the U.S. Senate.

After Everything Art Historians Have Done for the...